This time-lapse animation shows NICER being extracted from the SpaceX Dragon trunk on June 11, 2017.
Credits: NASA
NASA’s new Neutron star Interior Composition Explorer (NICER) mission to study the densest observable objects in the universe has begun science operations.
Launched June 3 on an 18-month baseline mission, NICER will help scientists understand the nature of the densest stable form of matter located deep in the cores of neutron stars using X-ray measurements.
NICER operates around the clock on the International Space Station (ISS). In the two weeks following launch, NICER underwent extraction from the SpaceX Dragon spacecraft, robotic installation on ExPRESS Logistics Carrier 2 on board ISS and initial deployment. Commissioning efforts began June 14, as NICER deployed from its stowed launch configuration. All systems are functioning as expected.
“No instrument like this has ever been built for the space station,” said Keith Gendreau, the principal investigator for NICER at NASA's Goddard Space Flight Center in Greenbelt, Maryland. “As we transition from an instrument development project to a science investigation, it is important to recognize the fantastic engineering and instrument team who built a payload that delivers on all the promises made.”
To date, NICER has observed over 40 celestial targets. These objects were used to calibrate the X-ray Timing Instrument and supporting star-tracker camera. The observations also validated the payload’s performance that will enable its key science measurements.
Several cameras on the International Space Station have eyes on NICER. Since arriving to the space station on June 5 – aboard SpaceX’s eleventh cargo resupply mission – NICER underwent robotic installation on ExPRESS Logistics Carrier 2, initial deployment, precise point tests and more. This video shows segments of NICER’s time in space. Scientists and engineers will continue to watch NICER using these cameras throughout the mission’s science operations.
Credits: NASA’s Goddard Space Flight Center
Download this video in HD formats from NASA Goddard's Scientific Visualization Studio
Along with the instrument’s transition to full science operations, the embedded Station Explorer for X-ray Timing and Navigation Technology (SEXTANT) demonstration will begin using NICER data to tune the built-in flight software for its first experiment.
“Our initial timing models use data collected by terrestrial radio telescopes,” said Jason Mitchell, the SEXTANT project manager at Goddard. “Because NICER observes in X-rays, we will account for the difference between the pulses we recover in X-rays compared to our radio models.” 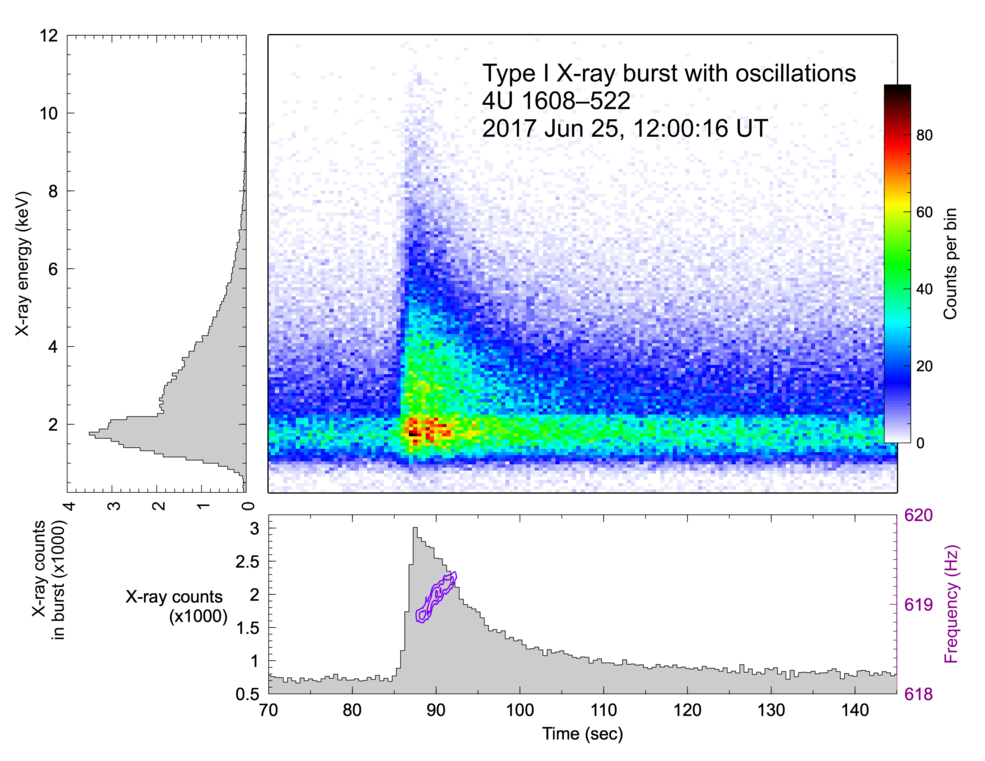 During NICER commissioning, an observation of low-mass X-ray binary 4U 1608–522 revealed a serendipitous Type I X-ray burst, a flare resulting from a thermonuclear explosion on the surface of a neutron star. 4U 1608 consists of a neutron star in a close orbit with a low-mass star from which it is drawing gas. As this matter accretes and piles up on the neutron star surface, its density in the strong-gravity environment increases until an explosive nuclear fusion reaction is ignited. The heated neutron star surface and atmosphere glow in X-rays, cooling and dimming over the span of about one minute. The hot-spot on the star swings in and out of NICER’s view as the star spins, approximately 619 times each second; these fluctuations in X-ray brightness, and their evolution during the burst, are indicated by the purple contours in the lower panel. NICER provides a unique such bursts, tracing flame propagation and other phenomena through the burst's temperature and brightness changes over time, with simultaneous fast-timing and spectroscopy capability not previously available.
Credits: NASA 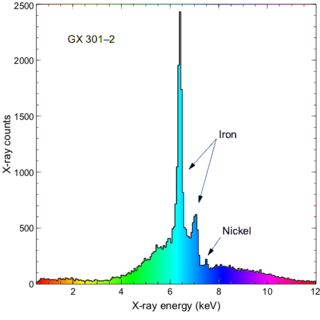 GX 301–2, a high mass X-ray binary, is a system in which a massive, aging star's dense wind is drawn toward the strong gravity of a neutron star. The column of falling material emits X-rays, dominated at certain times by the fluorescent glow of atoms of heavy metals such as iron and nickel. NICER's X-ray detectors measure the energies (or colors) of X-ray photons – the technique of spectroscopy – to determine the chemical makeup and density of the accreting material in this 1,200-second exposure.
Credits: NASA
Once NICER collects data on each of SEXTANT’s target pulsars, the software will exploit timing models developed using NICER-only data.
NICER-SEXTANT is a two-in-one mission. NICER will study the strange, ultra-dense astrophysics objects known as neutron stars to determine how matter behaves in their interiors. SEXTANT will use NICER’s observations of rapidly rotating neutron stars, or pulsars, to demonstrate autonomous X-ray navigation in space.
NICER is an Astrophysics Mission of Opportunity within NASA's Explorer program, which provides frequent flight opportunities for world-class scientific investigations from space utilizing innovative, streamlined, and efficient management approaches within the heliophysics and astrophysics science areas. NASA's Space Technology Mission Directorate supports the SEXTANT component of the mission, demonstrating pulsar-based spacecraft navigation.
For more information about NICER, visit:
https://www.nasa.gov/nicer/
To download NICER Multimedia:
https://svs.gsfc.nasa.gov/Gallery/NICER.html
For more information about SEXTANT, visit:
https://gameon.nasa.gov/projects/deep-space-x-ray-navigation-and-communication/
For more information about research and technology on the International Space Station, visit:
https://www.nasa.gov/mission_pages/station/research/index.html
Clare SkellyNASA's Goddard Space Flight Center, Greenbelt, Md.301-286-4994clare.a.skelly@nasa.gov
Editor: Rob Garner
Publicado por salud equitativa en 13:13