NASA Listens in as Electrons Whistle While They Work | NASA

NASA Listens in as Electrons Whistle While They Work | NASA

NASA Listens in as

Space is not empty, nor is it silent. While technically a vacuum, space nonetheless contains energetic charged particles, governed by magnetic and electric fields, and it behaves unlike anything we experience on Earth. In regions laced with magnetic fields, such as the space environment surrounding our planet, particles are continually tossed to and fro by the motion of various electromagnetic waves known as plasma waves. These plasma waves, like the roaring ocean surf, create a rhythmic cacophony that — with the right tools — we can hear across space.
A type of plasma wave known as chorus as heard by the EMFISIS instrument aboard NASA’s Van Allen Probes as it passed around Earth.Credits: NASA/University of IowaDownload "Chorus Plasma Waves" (MP3)
Just as waves roll across the ocean or storm fronts move through the atmosphere, disturbances in space, can cause waves. These waves occur as fluctuating electric and magnetic fields plow through clumps of ions and electrons that compose the plasma, pushing some to accelerated speeds. This interaction controls the balance of highly energetic particles injected and lost from in the near-Earth environment.
One type of plasma wave fundamental to shaping our near-Earth environment are whistler-mode waves. These waves create distinct sounds dependent on the plasma they travel through. For example, the region tight around Earth, called the plasmasphere, is relatively dense with cold plasma. Waves traveling inside this region sound much different than those outside. While different whistler-mode waves sing different sounds, they all move in the same way, with the same electromagnetic properties. 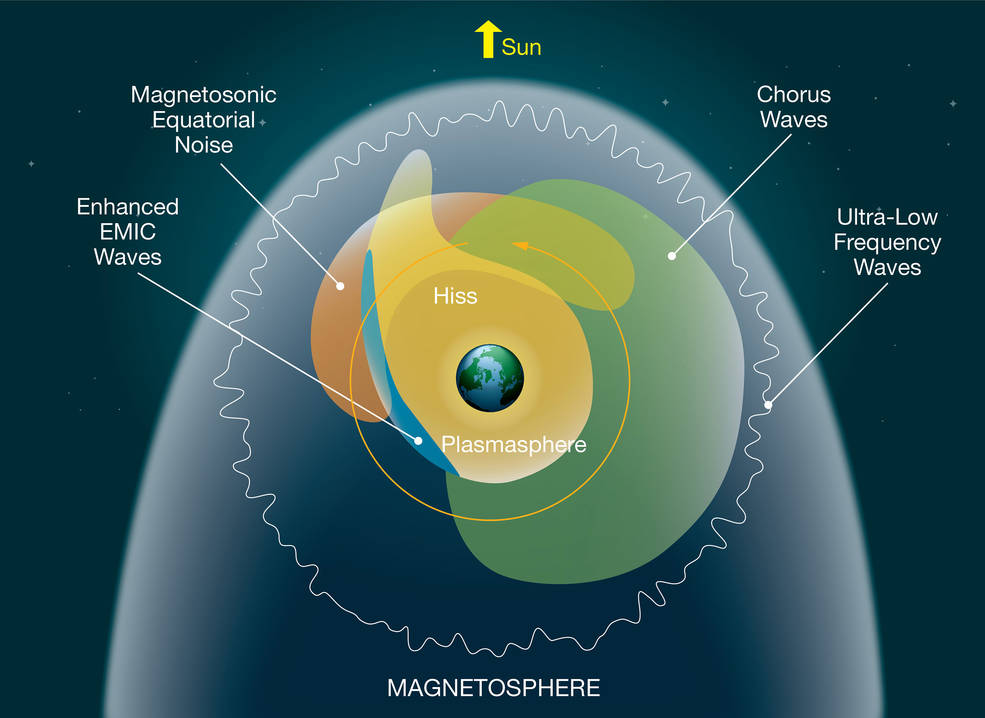 Different types of plasma waves triggered by various mechanisms, occupy different regions of space around Earth.
Credits: NASA's Goddard Space Flight Center/Mary Pat Hrybyk-Keith
When lighting strikes the ground, the electrical discharge can also trigger whistler-mode plasma waves. Some of the waves escape beyond the atmosphere to bounce like bumper cars along Earth’s magnetic field lines between the north and south poles. Since the lightning creates a range of frequencies, and since higher frequencies travel faster, the wave howls a falling pitch, giving the wave its name — a whistler.
Whistler waves as heard by the EMFISIS instrument aboard NASA’s Van Allen Probes as it passed around Earth.Credits: NASA/University of IowaDownload "Whistler Waves" (MP3)
Out beyond the plasmasphere, where the plasma is tenuous and relatively warm, whistler-mode waves create primarily rising chirps, like a flock of noisy birds. This type of wave is called chorus and is created when electrons are pushed towards the night side of Earth — which in some cases, may be caused by magnetic reconnection, a dynamic explosion of tangled magnetic field lines on the dark side of Earth. When these low energy electrons hit the plasma, they interact with particles in the plasma, imparting their energy and creating a unique rising tone.
Chorus waves as heard by the EMFISIS instrument aboard NASA’s Van Allen Probes as it passed around Earth.Credits: NASA/University of IowaDownload "Chorus Waves" (MP3)
Whistler-mode waves traveling inside the plasmasphere are called plasmaspheric hiss and sound a lot like radio station static. Some scientists think hiss is also caused by lightning strikes, but others think it could be caused by chorus waves that have leaked inside the plasmasphere. Both chorus and hiss waves are key shapers of the near-Earth environment including the Van Allen radiation belts, doughnut-shaped rings of high-energy particles encircling the planet.
Plasmaspheric hiss waves as heard by NASA’s Polar mission as it passed around Earth.Credits: NASA/University of IowaDownload "Plasmaspheric Hiss Waves" (WAV)
NASA scientists, with the help of the Van Allen Probes mission, are working to understand the dynamics of plasma waves to improve predictions of space weather, which can have damaging effects on satellites and telecommunications signals. As a part of their observations, the scientists have recorded these eerie sounds made by different plasma waves in the particle symphony surrounding Earth.
NASA’s two Van Allen Probe spacecraft use an instrument called EMFISIS, short for Electric and Magnetic Field Instrument Suite and Integrated Science, to measure electric and magnetic waves as they circle Earth. As the spacecraft encounter a wave, sensors record the changes in the frequency of the electric and magnetic fields. The scientists shift the frequencies to the audible range so that we can listen to the sounds of space.
By understanding how waves and particles interact, scientists can learn how electrons are accelerated and lost from the radiation belts and help protect our satellites and telecommunications in space.
Related Links
Banner image: Space is not empty, nor is it silent. The region around Earth is filled with magnetic field lines and trapped energetic particles, zooming about in a high-speed dance around the planet (shown here in an illustration). Credits: NASA's Goddard Space Flight Center/Brian Monroe
By Mara Johnson-GrohNASA's Goddard Space Flight Center, Greenbelt, Md.
Editor: Rob Garner
Publicado por salud equitativa en 13:04