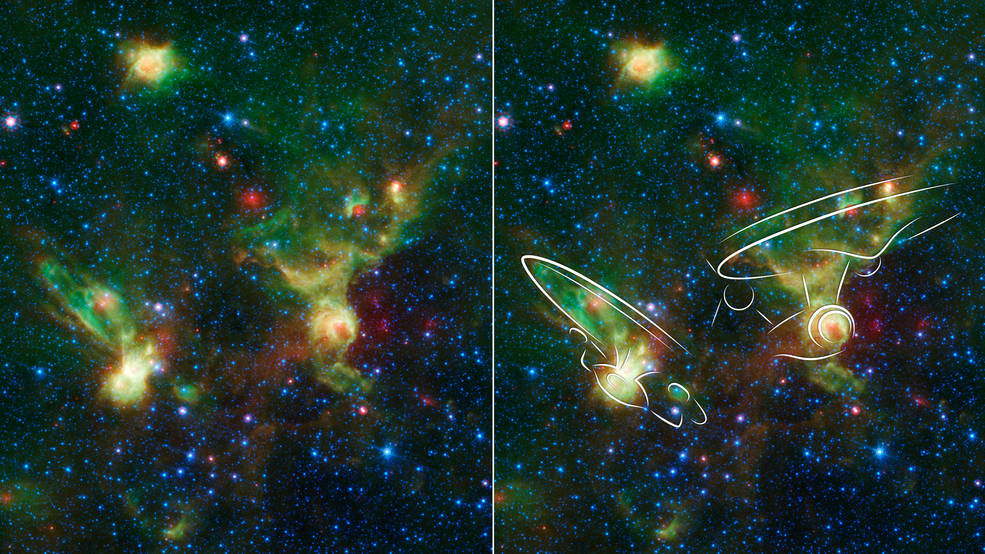 These nebulae seen by NASA's Spitzer Space Telescope, at left, may resemble two versions of the starship Enterprise from "Star Trek," overlaid at right.
Credits: NASA/JPL-Caltech
Just in time for the 50th anniversary of the TV series "Star Trek," which first aired September 8th,1966, a new infrared image from NASA's Spitzer Space Telescope may remind fans of the historic show.
Since ancient times, people have imagined familiar objects when gazing at the heavens. There are many examples of this phenomenon, known as pareidolia, including the constellations and the well-known nebulae named Ant, Stingray and Hourglass.
On the right of the image, with a little scrutiny, you may see hints of the saucer and hull of the original USS Enterprise, captained by James T. Kirk, as if it were emerging from a dark nebula. To the left, its "Next Generation" successor, Jean-Luc Picard's Enterprise-D, flies off in the opposite direction.
Astronomically speaking, the region pictured in the image falls within the disk of our Milky Way galaxy and displays two regions of star formation hidden behind a haze of dust when viewed in visible light. Spitzer's ability to peer deeper into dust clouds has revealed a myriad of stellar birthplaces like these, which are officially known only by their catalog numbers, IRAS 19340+2016 and IRAS19343+2026.
Trekkies, however, may prefer using the more familiar designations NCC-1701 and NCC-1701-D. Fifty years after its inception, Star Trek still inspires fans and astronomers alike to boldly explore where no one has gone before.
This image was assembled using data from Spitzer's biggest surveys of the Milky Way, called GLIMPSE and MIPSGAL. Light with a wavelength of 3.5 microns is shown in blue, 8.0 microns in green, and 24 microns in red. The green colors highlight organic molecules in the dust clouds, illuminated by starlight. Red colors are related to thermal radiation emitted from the very hottest areas of dust.
JPL manages the Spitzer Space Telescope mission for NASA's Science Mission Directorate, Washington. Science operations are conducted at the Spitzer Science Center at Caltech in Pasadena, California. Spacecraft operations are based at Lockheed Martin Space Systems Company, Littleton, Colorado. Data are archived at the Infrared Science Archive housed at the Infrared Processing and Analysis Center at Caltech. Caltech manages JPL for NASA.
For more information about Spitzer, visit:
http://spitzer.caltech.edu
http://www.nasa.gov/spitzer
Elizabeth LandauJet Propulsion Laboratory, Pasadena, Calif.818-354-6425elizabeth.landau@jpl.nasa.gov
Written by Robert Hurt, NASA's Spitzer Science Center
2016-234
Editor: Tony Greicius