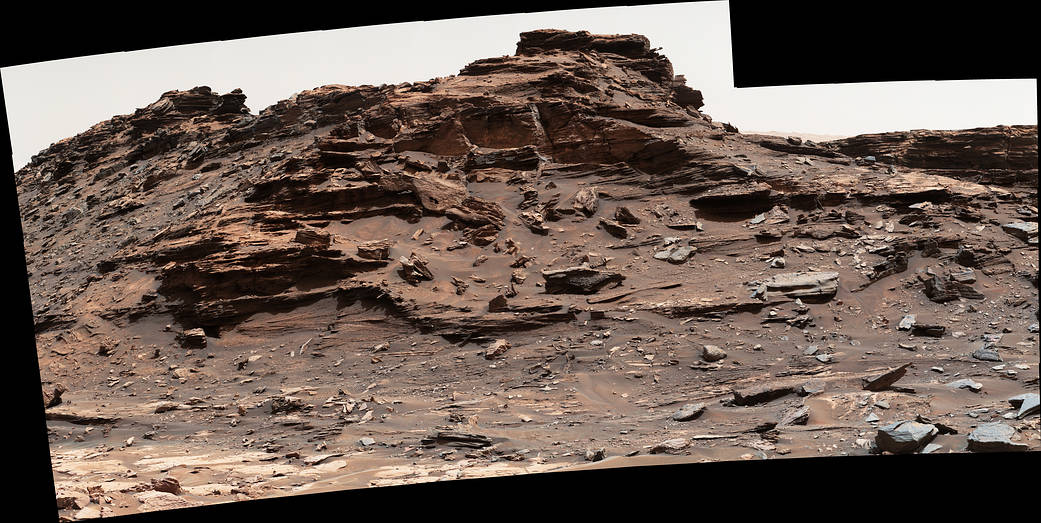 The top of the butte in this scene from the Mast Camera (Mastcam) on NASA's Curiosity Mars rover stands about 16 feet (about 5 meters) above the rover and about 82 feet (about 25 meters) east-southeast of the rover.
Mastcam's right-eye (telephoto-lens) camera took the component images of this mosaic on Sept. 1, 2016, during the 1,448th Martian day, or sol, of Curiosity's work on Mars.
The site is in the scenic "Murray Buttes" area, where individual buttes and mesas were assigned numbers.  This one is "M9a." The average slope on the prominent ridge on the left side is more than 40 degrees, while the average slope on the right side of the highest point is about 30 degrees.
The rover's location when it recorded this scene was the site it reached in its Sol 1446 drive. (See map at http://mars.nasa.gov/msl/multimedia/images/?ImageID=8009.)
The scene is presented with a color adjustment that approximates white balancing, to resemble how the rocks and sand would appear under daytime lighting conditions on Earth.
Malin Space Science Systems, San Diego, built and operates Mastcam. NASA's Jet Propulsion Laboratory, a division of Caltech, in Pasadena, California, manages the Mars Science Laboratory Project for NASA's Science Mission Directorate, Washington, and built the project's Curiosity rover. For more information about Curiosity, visit http://www.nasa.gov/msl and http://mars.jpl.nasa.gov/msl.
Credit: NASA/JPL-Caltech/MSSS
Editor: Tony Greicius