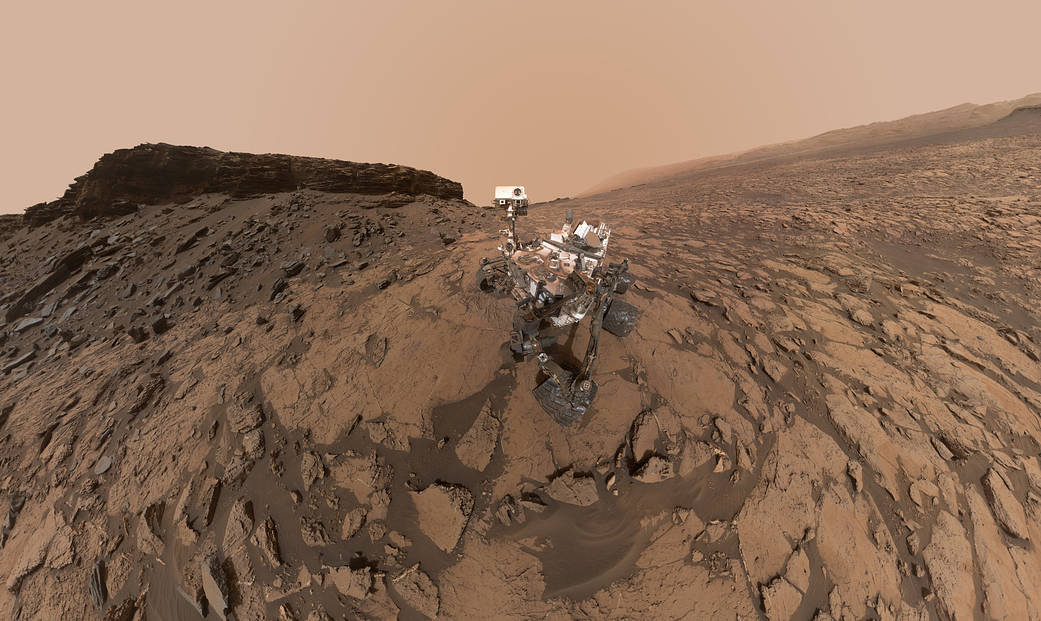 This self-portrait of NASA's Curiosity Mars rover shows the vehicle at the "Quela" drilling location in the "Murray Buttes" area on lower Mount Sharp.
Key features on the skyline of this panorama are the dark mesa called "M12" to the left of the rover's mast and pale, upper Mount Sharp to the right of the mast. The top of M12 stands about 23 feet (7 meters) above the base of the sloping piles of rocks just behind Curiosity.
The scene combines approximately 60 images taken by the Mars Hand Lens Imager (MAHLI) camera at the end of the rover's robotic arm.  Most of the component images were taken on Sept. 17, 2016, during the 1,463rd Martian day, or sol, of Curiosity's work on Mars. Two component images of the drill-hole area in front of the rover were taken on Sol 1466 (Sept. 20) to show the hole created by collecting a drilled sample at Quela on Sol 1464 (Sept. 18).
The skyline sweeps from west on the left to south-southwest on the right, with the rover's mast at northeast. The rover's location when it recorded this scene was where it ended a drive on Sol 1455, mapped at http://mars.nasa.gov/msl/multimedia/images/?ImageID=8029.
The view does not include the rover's arm nor the MAHLI camera itself, except in the miniature scene reflected upside down in the parabolic mirror at the top of the mast.  That mirror is part of Curiosity's Chemistry and Camera (ChemCam) instrument. MAHLI appears in the center of the mirror.
Wrist motions and turret rotations on the arm allowed MAHLI to acquire the mosaic's component images. The arm was positioned out of the shot in the images, or portions of images, that were used in this mosaic. This process was used previously in acquiring and assembling Curiosity self-portraits taken at other sample-collection sites, including "Rocknest" (http://photojournal.jpl.nasa.gov/catalog/PIA16468), "Windjana" (http://photojournal.jpl.nasa.gov/catalog/PIA18390), "Buckskin" (http://photojournal.jpl.nasa.gov/catalog/PIA19808) and "Gobabeb"  (http://photojournal.jpl.nasa.gov/catalog/PIA20316).
For scale, the rover's wheels are 20 inches (50 centimeters) in diameter and about 16 inches (40 centimeters) wide.
MAHLI was built by and is operated by Malin Space Science Systems, San Diego. NASA's Jet Propulsion Laboratory, a division of the California Institute of Technology in Pasadena, manages the Mars Science Laboratory Project for the NASA Science Mission Directorate, Washington. JPL designed and built the project's Curiosity rover.
More information about Curiosity is online at http://www.nasa.gov/msl and http://mars.jpl.nasa.gov/msl/.
Credit: NASA/JPL-Caltech/MSSS
Editor: Tony Greicius