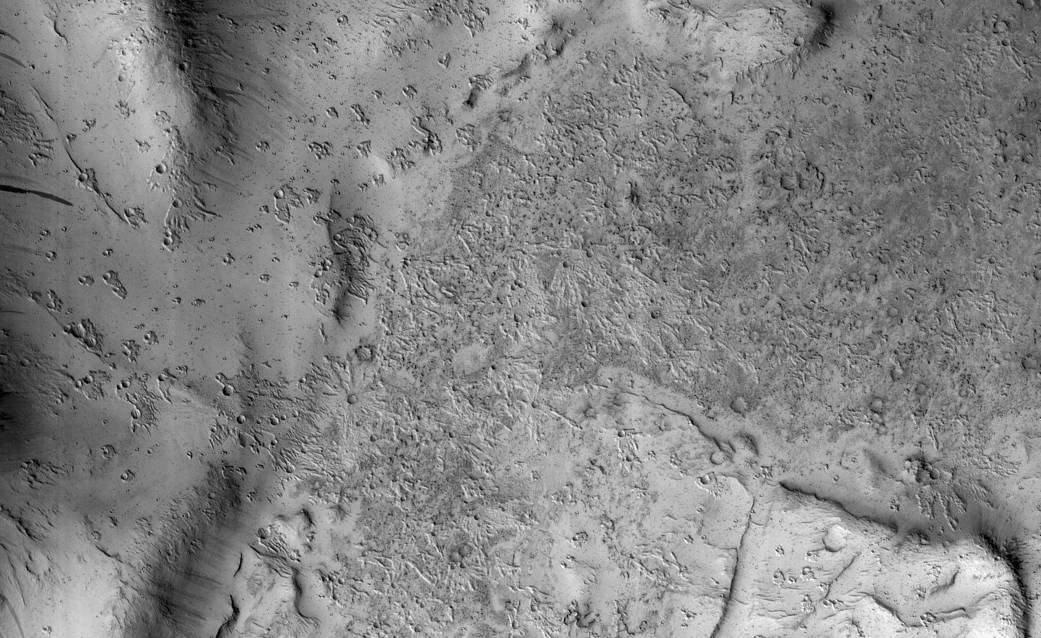 NASA's Mars Reconnaissance Orbiter (MRO) captured this region of Mars, sprayed with secondary craters from 10-kilometer Zunil Crater to the northwest.
Secondary craters form from rocks ejected at high speed from the primary crater, which then impact the ground at sufficiently high speed to make huge numbers of much smaller craters over a large region. In this scene, however, the secondary crater ejecta has an unusual raised-relief appearance like bas-relief sculpture. How did that happen?
One idea is that the region was covered with a layer of fine-grained materials like dust or pyroclastics about 1 to 2 meters thick when the Zunil impact occurred (about a million years ago), and the ejecta served to harden or otherwise protect the fine-grained layer from later erosion by the wind.
This is a stereo pair with ESP_049564_1845.
The map is projected here at a scale of 50 centimeters (19.7 inches) per pixel. [The original image scale is 55 centimeters (21.7 inches) per pixel (with 2 x 2 binning); objects on the order of 165 centimeters (65 inches) across are resolved.] North is up
The University of Arizona, Tucson, operates HiRISE, which was built by Ball Aerospace & Technologies Corp., Boulder, Colo. NASA's Jet Propulsion Laboratory, a division of Caltech in Pasadena, California, manages the Mars Reconnaissance Orbiter Project for NASA's Science Mission Directorate, Washington.
Image credit: NASA/JPL-Caltech/Univ. of Arizona
Editor: Tony Greicius