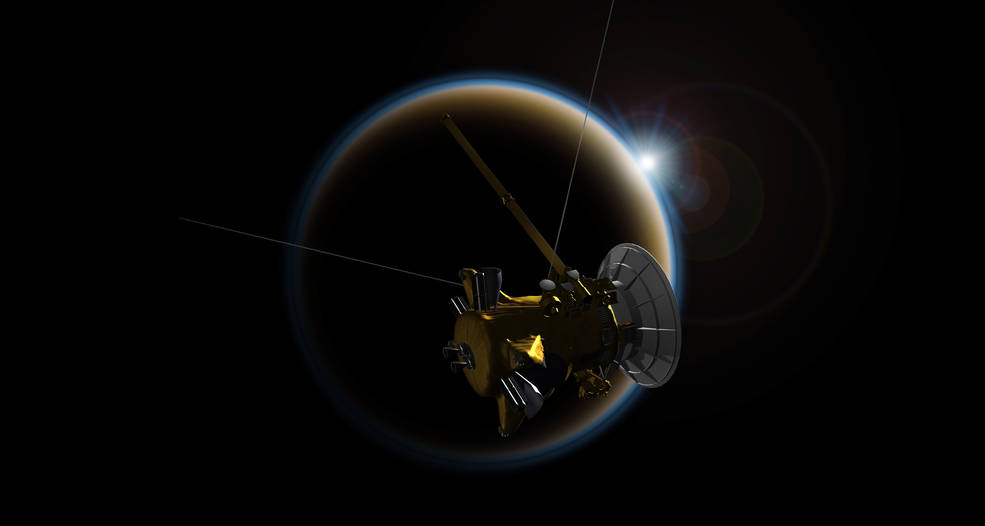 Cassini will make its final close flyby of Saturn's moon Titan on April 21 (PDT), using its radar to reveal the moon's surface lakes and seas one last time.
Credits: NASA/JPL-Caltech
NASA's Cassini spacecraft will make its final close flyby of Saturn's haze-enshrouded moon Titan this weekend. The flyby marks the mission's final opportunity for up-close observations of the lakes and seas of liquid hydrocarbons that spread across the moon's northern polar region, and the last chance to use its powerful radar to pierce the haze and make detailed images of the surface.
Closest approach to Titan is planned for 11:08 p.m. PDT on April 21 (2:08 a.m. EDT April 22). During the encounter, Cassini will pass as close as 608 miles (979 kilometers) above Titan's surface at a speed of about 13,000 mph (21,000 kph).
The flyby is also the gateway to Cassini's Grand Finale -- a final set of 22 orbits that pass between the planet and its rings, ending with a plunge into Saturn on Sept. 15 that will end the mission.  During the close pass on April 21, Titan's gravity will bend Cassini's orbit around Saturn, shrinking it slightly, so that instead of passing just outside the rings, the spacecraft will begin its finale dives which pass just inside the rings.
NASA's Cassini spacecraft, in orbit around Saturn for nearly 13 years, is beginning its Grand Finale — and it's thanks to some Crazy Engineering! A team of engineers called astrodynamicists used math and physics to plot a course for the hardy spacecraft that would send it on a series of dives through the gap between Saturn and its famous rings. And as always, the efforts of these engineers are helping to enable some truly thrilling exploration and scientific discovery.
Credits: NASA/JPL-Caltech
The flyby is Cassini's 127th targeted encounter with Titan. A targeted flyby is one for which the spacecraft uses its rocket engine or thrusters to accurately aim toward the encounter.
Cassini's radar instrument will look for changes in Titan’s methane lakes and seas, and attempt for the first (and last) time to study the depth and composition of Titan’s smaller lakes. The radar instrument will also search a final time for Titan’s "magic island," a mysterious feature in one of the moon's seas that changed in appearance over the course of several flybys. Scientists hope to gain additional insights to help them determine whether the feature is waves, bubbles, floating debris, or something else entirely.
More information about Cassini's final Titan flyby is available at:
https://go.nasa.gov/2nFHaTo
The Cassini-Huygens mission is a cooperative project of NASA, ESA (European Space Agency) and the Italian Space Agency. NASA's Jet Propulsion Laboratory, a division of Caltech in Pasadena, manages the mission for NASA's Science Mission Directorate, Washington. JPL designed, developed and assembled the Cassini orbiter.
More information about Cassini:
http://www.nasa.gov/cassini
http://saturn.jpl.nasa.gov
Preston DychesJet Propulsion Laboratory, Pasadena, Calif.818-394-7013preston.dyches@jpl.nasa.gov
2017-112
Editor: Tony Greicius
Publicado por salud equitativa en 11:08