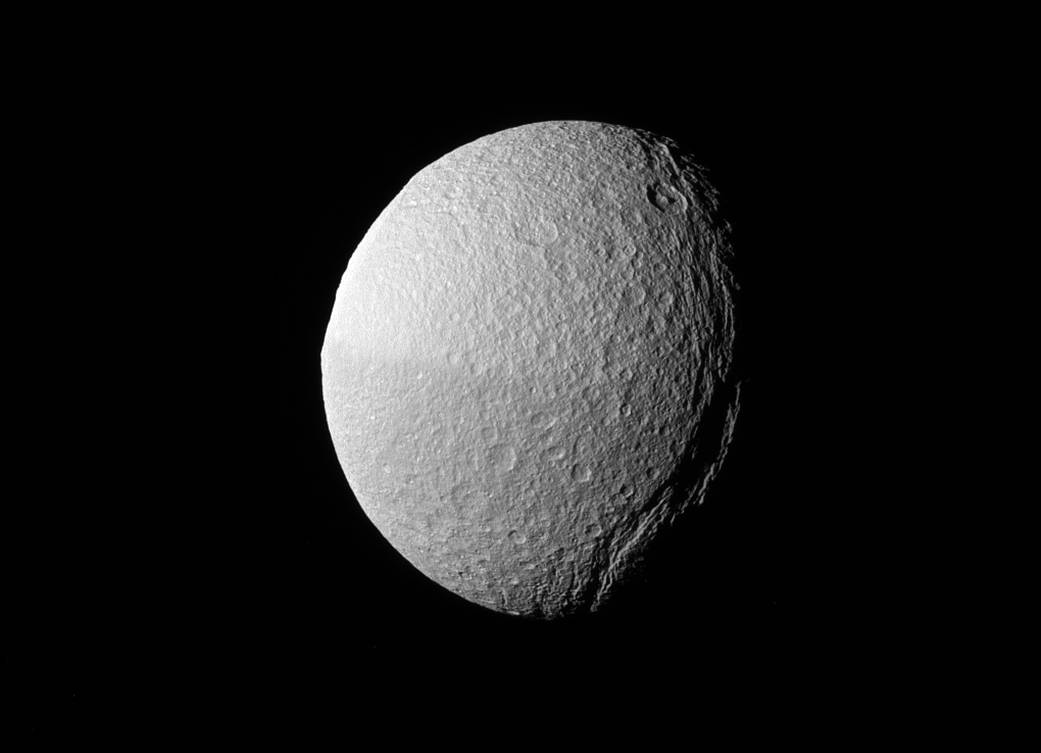 The low angle of the sun over Tethys' massive canyon, Ithaca Chasma (near the terminator, at right), highlights the contours of this enormous rift.
Ithaca Chasma is up to 60 miles (100 kilometers) wide, and runs nearly three-fourths of the way around icy Tethys (660 miles or 1,062 kilometers across). The canyon has a maximum depth of nearly 2.4 miles (4 kilometers) deep.
The giant crater Odysseus -- usually one of Tethys’ most recognizable features-- is barely seen in profile along the limb, at upper left.
This view looks toward the Saturn-facing hemisphere of Tethys. North on Tethys is up and rotated 5 degrees to the left. The image was taken in green light with the Cassini spacecraft narrow-angle camera on Jan. 30, 2017.
The view was obtained at a distance of approximately 221,000 miles (356,000 kilometers) from Tethys. Image scale is 1 mile (2 kilometers) per pixel.
The Cassini mission is a cooperative project of NASA, ESA (the European Space Agency) and the Italian Space Agency. The Jet Propulsion Laboratory, a division of the California Institute of Technology in Pasadena, manages the mission for NASA's Science Mission Directorate, Washington. The Cassini orbiter and its two onboard cameras were designed, developed and assembled at JPL. The imaging operations center is based at the Space Science Institute in Boulder, Colorado.
For more information about the Cassini-Huygens mission visit https://saturn.jpl.nasa.gov and http://www.nasa.gov/cassini . The Cassini imaging team homepage is at http://ciclops.org .
Credit: NASA/JPL-Caltech/Space Science Institute
Editor: Tony Greicius
Publicado por salud equitativa en 9:07