Dune Transition in the 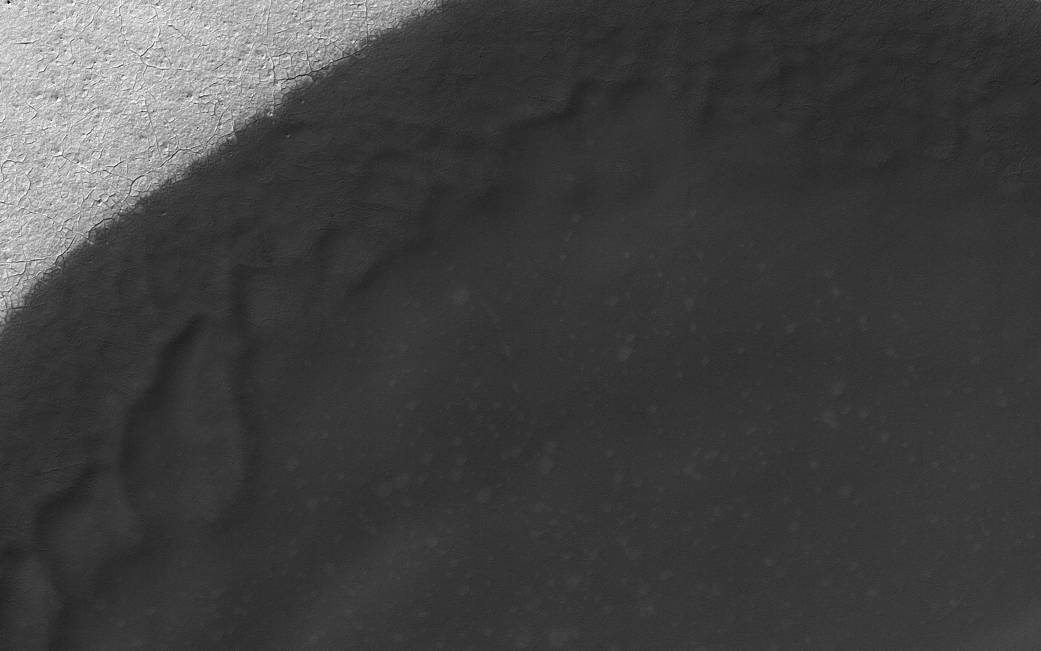 Sand dune populations on Mars can vary widely with respect to morphology, relief, and activity. One of the most striking examples occurs with the many dune fields of the high Southern latitudes.
When we venture south of -60 degrees latitude, we see increasing signs of dune degradation, with subdued dune brinks and broad sandy aprons, rather than sharp, dune crests and distinct boundaries (see PIA21571). Dunes this far south are also very modest in height, often consisting solely of flat sand sheets. Additionally, global monitoring campaigns are revealing a noticeable lack of changes in these bedform positions, whereas many dunes and ripples to the north are migrating across the surface (see PIA12289).
This image shows a moderate sized dune field (-72 degrees latitude) that displays most of these morphologic features and a noticeable absence of dune crests. This transition is likely related to polar processes, ground ice, and changes in regional climate relative to the rest of the planet.
The map is projected here at a scale of 50 centimeters (19.7 inches) per pixel. [The original image scale is 49.6 centimeters (19.5 inches) per pixel (with 2 x 2 binning); objects on the order of 149 centimeters (58.6 inches) across are resolved.] North is up.
The University of Arizona, Tucson, operates HiRISE, which was built by Ball Aerospace & Technologies Corp., Boulder, Colo. NASA's Jet Propulsion Laboratory, a division of Caltech in Pasadena, California, manages the Mars Reconnaissance Orbiter Project for NASA's Science Mission Directorate, Washington.
Image credit: NASA/JPL-Caltech/Univ. of Arizona
Editor: Tony Greicius
Publicado por salud equitativa en 11:03