On April 3, 2017, as Jupiter made its nearest approach to Earth in a year, NASA’s Hubble Space Telescope viewed the solar system’s largest planet in all of its up-close glory. At a distance of 415 million miles (668 million kilometers) from Earth, Jupiter offered spectacular views of its colorful, roiling atmosphere, the legendary Great Red Spot, and it smaller companion at farther southern latitudes dubbed “Red Spot Jr.” 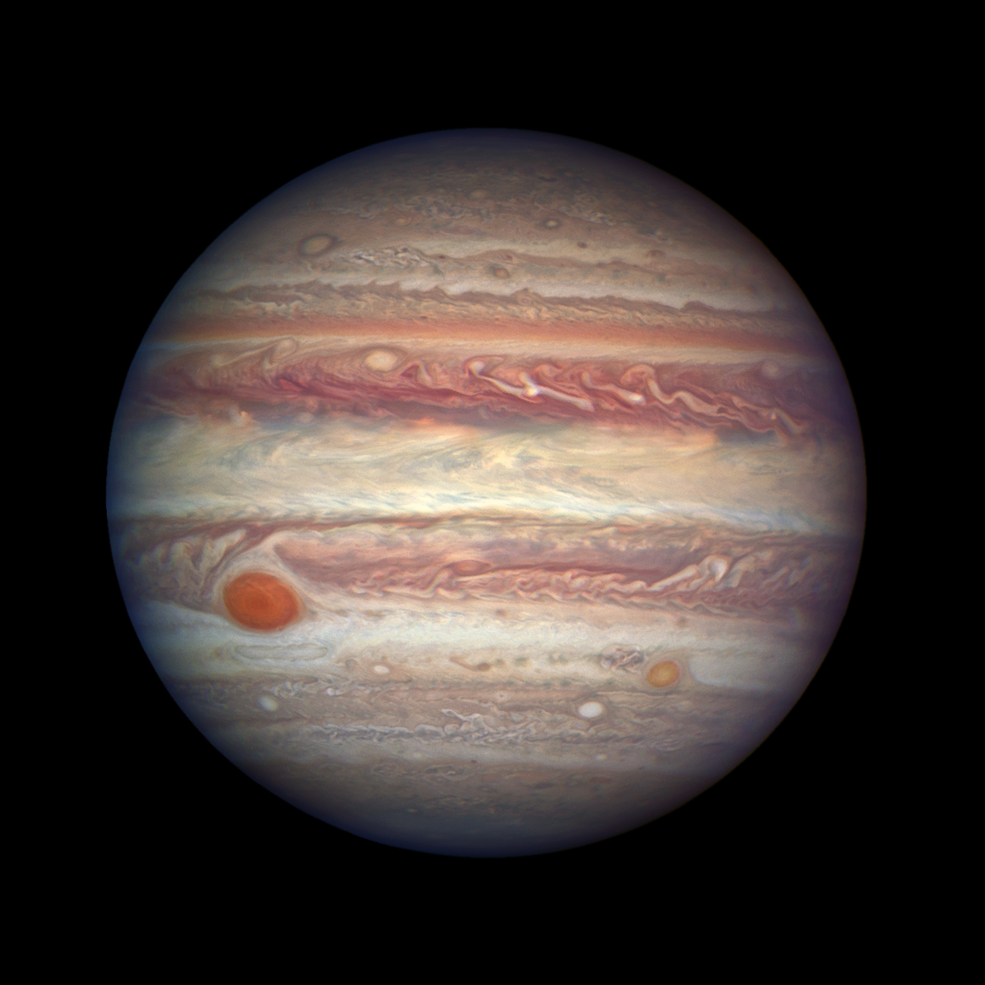 This dazzling Hubble Space Telescope photo of Jupiter was taken when it was comparatively close to Earth, at a distance of 415 million miles. Hubble reveals the intricate, detailed beauty of Jupiter's clouds as arranged into bands of different latitudes, known as tropical regions. These bands are produced by air flowing in different directions at various latitudes. Lighter colored areas, called zones, are high-pressure where the atmosphere rises. Darker low-pressure regions where air falls are called belts. The planet's trademark, the Great Red Spot, is a long-lived storm roughly the diameter of Earth. Much smaller storms appear as white or brown-colored ovals. Such storms can last as little as a few hours or stretch on for centuries.
Credits: NASA, ESA, and A. Simon (NASA Goddard)

Got a stellar Hubble image on a T-shirt? Or maybe you’ve spotted a Hubble tattoo! Share your photos on Instagram, Twitter, Flickr and Facebook with #SpotHubble and maybe you’ll get a shout-out from @NASAHubble!
Credits: NASA's Goddard Space Flight Center/Jenny Hottle
Learn More about #SpotHubble

Animation showing Hubble observations of Jupiter's Great Red Spot, 1992 through 2017.
Credits: Z. Levay (STScI)/R. Garner (NASA Goddard)
Download larger animation (13 MB)
The giant planet is now at “opposition,” positioned directly opposite the sun from the Earth. This means that the sun, Earth and Jupiter line up, with Earth sitting between the sun and the gas giant. Opposition also marks Jupiter’s closest point to us, and the planet appears brighter in the night sky than at any other time in the year.
This positioning allowed a team led by Amy Simon of NASA’s Goddard Space Flight Center in Greenbelt, Maryland, to observe Jupiter using Hubble’s Wide Field Camera 3. Hubble photographed exquisite details in Jupiter’s atmosphere, as small as about 80 miles (129 kilometers) across.
With its immense and powerful storms and hundreds of smaller vortices, the atmosphere of Jupiter is divided into several distinct, colorful bands, parallel to the equator. These bands, with alternating wind motions, are created by differences in the thickness and height of the ammonia ice clouds; the lighter bands rise higher and have thicker clouds than the darker bands. The bands are separated by winds that can reach speeds of up to 400 miles (644 kilometers) per hour.
Jupiter is best known for the Great Red Spot, an anticyclone that has raged for at least 150 years. This famous storm is larger than Earth. However, the Great Red Spot is slowly shrinking — a trend seen since the late 1800s. The reason for this phenomenon is still unknown. Hubble will continue to observe Jupiter in hopes of solving this mysterious riddle.
The images are part of the Outer Planets Atmospheres Legacy program or OPAL. This program provides yearly Hubble global views of the outer planets to look for changes in their storms, winds, and clouds. It began in 2014 with Uranus, and has been studying Jupiter and Neptune since 2015. In 2018, it will begin viewing Saturn.
The team timed the Hubble observation to coincide with when NASA’s space probe Juno would be near its closest point to Jupiter, so that scientists could get concurrent observations.
The Hubble Space Telescope is a project of international cooperation between NASA and ESA (European Space Agency). NASA's Goddard Space Flight Center in Greenbelt, Maryland, manages the telescope. The Space Telescope Science Institute (STScI) in Baltimore conducts Hubble science operations. STScI is operated for NASA by the Association of Universities for Research in Astronomy, Inc., in Washington, D.C.
Credit: NASA's Goddard Space Flight Center
Download video in HD formats from NASA Goddard's Scientific Visualization Studio.
For images and more information about the study and Hubble, visit:
http://hubblesite.org/news_release/news/2017-15
http://www.nasa.gov/hubble
Ann Jenkins / Ray Villard
Space Telescope Science Institute, Baltimore, Maryland
410-338-4488 / 410-338-4514
jenkins@stsci.edu / villard@stsci.edu
Editor: Karl Hille
Publicado por salud equitativa en 8:51