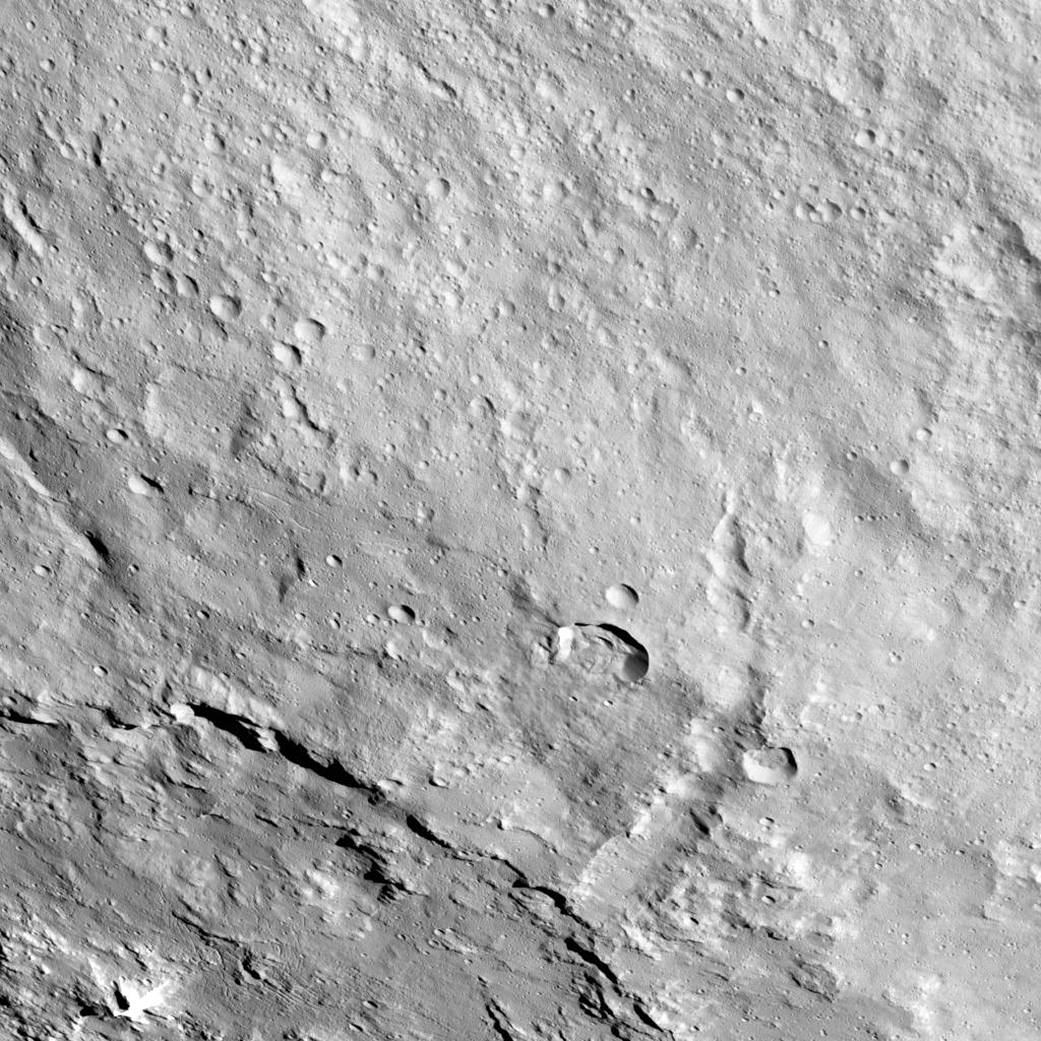 This image from NASA's Dawn spacecraft shows the northeastern rim of Urvara Crater on Ceres at lower left. To the right of the crater, the long, narrow feature that appears to jut out toward the north is called Pongal Catena, which is about 60 miles (96 km) long.
Catenae are large grooves or troughs that can have various origins. They refer to chains of closely connected craters formed by a series of impacts, as found on Jupiter's moon Ganymede. They can also represent large faults created by internal forces, for example in this example found on Mars (see PIA20441). The mechanism that formed Pongal Catena is not understood yet, but it likely formed as a consequence of the stresses generated by the large impacts that resulted in the formation of the Urvara and Yalode craters.
Pongal catena is one of several types of fractures found in this region that reflect a complex history. A feature called Nar Sulcus is another example. Studying the geometry of these features and their relationships can help shed light on the nature of Ceres' subsurface.
This image was obtained on September 28, 2015, from an altitude of about 915 miles (1,470 kilometers). Pongal Catena is centered at 37.4 degrees south latitude, 267.7 degrees east longitude. This feature gets its name from the Tamil (Sri Lanka and southern India) harvest festival observed in mid-January. It is a time for giving thanks to nature, and we thank Ceres for all the wonders it has offered us so far.
Dawn's mission is managed by JPL for NASA's Science Mission Directorate in Washington. Dawn is a project of the directorate's Discovery Program, managed by NASA's Marshall Space Flight Center in Huntsville, Alabama. UCLA is responsible for overall Dawn mission science. Orbital ATK Inc., in Dulles, Virginia, designed and built the spacecraft. The German Aerospace Center, Max Planck Institute for Solar System Research, Italian Space Agency and Italian National Astrophysical Institute are international partners on the mission team.
For a complete list of Dawn mission participants, visit http://dawn.jpl.nasa.gov/mission.
For more information about the Dawn mission, visit http://dawn.jpl.nasa.gov.
Image credit: NASA/JPL-Caltech/UCLA/MPS/DLR/IDA
Image download options
Editor: Tony Greicius
Publicado por salud equitativa en 6:03