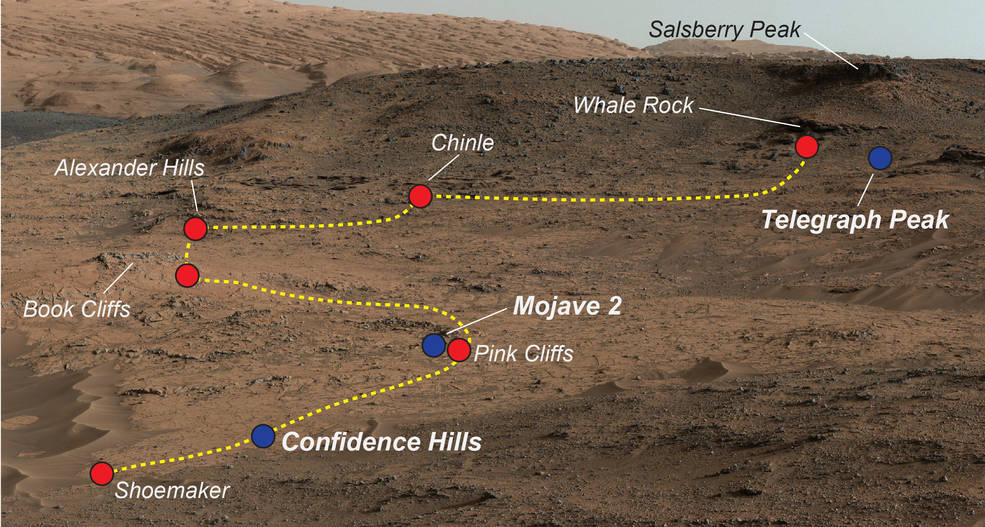 NASA's Curiosity Mars rover examined a mudstone outcrop area called "Pahrump Hills" on lower Mount Sharp, in 2014 and 2015. This view shows locations of some targets the rover studied there. The blue dots indicate where drilled samples of powdered rock were collected for analysis.
Credits: NASA/JPL-Caltech/MSSS
Full image and caption
NASA scientists have found a wide diversity of minerals in the initial samples of rocks collected by the Curiosity rover in the lowermost layers of Mount Sharp on Mars, suggesting that conditions changed in the water environments on the planet over time.
Curiosity landed near Mount Sharp in Gale Crater in August 2012. It reached the base of the mountain in 2014. Layers of rocks at the base of Mount Sharp accumulated as sediment within ancient lakes around 3.5 billion years ago. Orbital infrared spectroscopy had shown that the mountain's lowermost layers have variations in minerals that suggest changes in the area have occurred.
In a paper published recently in Earth and Planetary Science Letters, scientists in the Astromaterials Research and Exploration Science (ARES) Division at NASA's Johnson Space Center in Houston report on the first four samples collected from the lower layers of Mount Sharp.
"We went to Gale Crater to investigate these lower layers of Mount Sharp that have these minerals that precipitated from water and suggest different environments," said Elizabeth Rampe, the first author of the study and a NASA exploration mission scientist at Johnson. "These layers were deposited about 3.5 billion years ago, coinciding with a time on Earth when life was beginning to take hold. We think early Mars may have been similar to early Earth, and so these environments might have been habitable."
The minerals found in the four samples drilled near the base of Mount Sharp suggest several different environments were present in ancient Gale Crater. There is evidence for waters with different pH and variably oxidizing conditions. The minerals also show that there were multiple source regions for the rocks in "Pahrump Hills" and "Marias Pass."
The paper primarily reports on three samples from the Pahrump Hills region. This is an outcrop at the base of Mount Sharp that contains sedimentary rocks scientists believe formed in the presence of water. The other sample, called "Buckskin," was reported last year, but those data are incorporated into the paper.
Studying such rock layers can yield information about Mars' past habitability, and determining minerals found in the layers of sedimentary rock yields much data about the environment in which they formed. Data collected at Mount Sharp with the Chemistry and Mineralogy (CheMin) instrument on Curiosity showed a wide diversity of minerals.
At the base are minerals from a primitive magma source; they are rich in iron and magnesium, similar to basalts in Hawaii. Moving higher in the section, scientists saw more silica-rich minerals. In the "Telegraph Peak" sample, scientists found minerals similar to quartz. In the "Buckskin" sample, scientists found tridymite. Tridymite is found on Earth, for example, in rocks that formed from partial melting of Earth's crust or in the continental crust -- a strange finding because Mars never had plate tectonics.
In the "Confidence Hills" and "Mojave 2" samples, scientists found clay minerals, which generally form in the presence of liquid water with a near-neutral pH, and therefore could be good indicators of past environments that were conducive to life. The other mineral discovered here was jarosite, a salt that forms in acidic solutions. The jarosite finding indicates that there were acidic fluids at some point in time in this region.
There are different iron-oxide minerals in the samples as well. Hematite was found near the base; only magnetite was found at the top. Hematite contains oxidized iron, whereas magnetite contains both oxidized and reduced forms of iron. The type of iron-oxide mineral present may tell scientists about the oxidation potential of the ancient waters.
The authors discuss two hypotheses to explain this mineralogical diversity. The lake waters themselves at the base were oxidizing, so either there was more oxygen in the atmosphere or other factors encouraged oxidation. Another hypothesis -- the one put forward in the paper -- is that later-stage fluids arose. After the rock sediments were deposited, some acidic, oxidizing groundwater moved into the area, leading to precipitation of the jarosite and hematite. In this scenario, the environmental conditions present in the lake and in later groundwater were quite different, but both offered liquid water and a chemical diversity that could have been exploited by microbial life.
"We have all this evidence that Mars was once really wet but now is dry and cold," Rampe said. "Today, much of the water is locked up in the poles and in the ground at high latitudes as ice. We think that the rocks Curiosity has studied reveal ancient environmental changes that occurred as Mars started to lose its atmosphere and water was lost to space."
In the paper, the authors discuss whether this specific area on Mars is a mark of this event happening or just a natural drying of this area. Scientists will search for answers to these questions as the rover moves up the mountain.
To view the paper, go to:
https://www.sciencedirect.com/science/article/pii/S0012821X17302005
To learn more about ARES, go to:
https://ares.jsc.nasa.gov
For more information about the Curiosity rover mission, visit:
https://www.nasa.gov/curiosity
https://mars.nasa.gov/msl/
William P. Jeffs
Johnson Space Center, Houston
281-483-5111
william.p.jeffs@nasa.gov
Guy Webster
Jet Propulsion Laboratory, Pasadena, Calif.
818-354-6278
guy.webster@jpl.nasa.gov
Laurie Cantillo / Dwayne Brown
NASA Headquarters, Washington
202-358-1077 / 202-358-1726
laura.l.cantillo@nasa.gov / dwayne.c.brown@nasa.gov
2017-165
Editor: Tony Greicius
Publicado por salud equitativa en 6:03