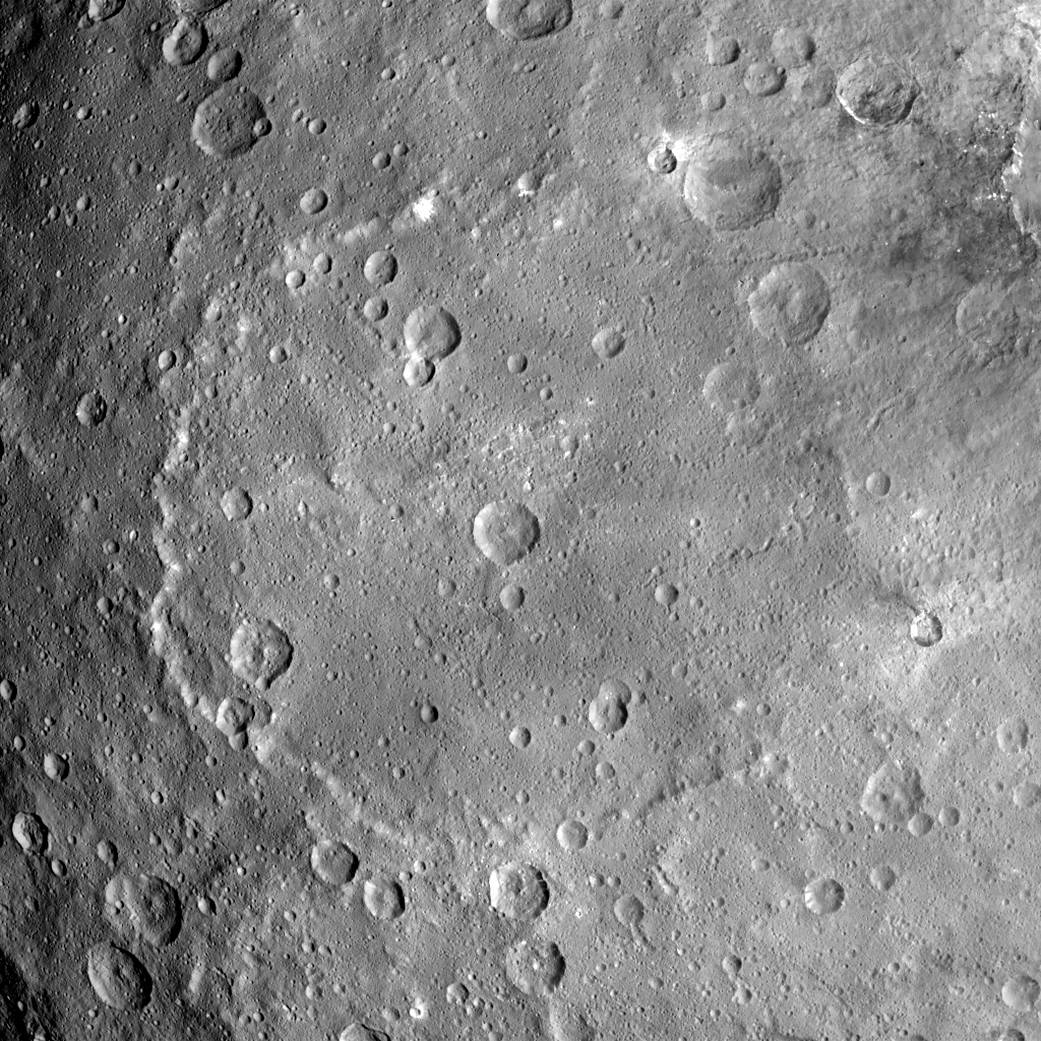 This image from NASA's Dawn spacecraft shows the largest crater on Ceres, called Kerwan.
The crater has an appearance scientists refer to as "relaxed," meaning its sharp features have softened since Kerwan formed. Its overall shape looks something like a pancake, especially when viewed near Ceres' limb. The origin of its polygonal shape is not yet well understood; it might be due to large faults in the subsurface generated by other large impacts, as has been suggested for other craters.
The smaller crater named Insitor sits in the center of Kerwan. The dark material seen at top right is ejecta from Dantu crater.
At 174 miles (280 kilometers) wide, Kerwan is so large that it would have taken about 50 images at Dawn's low-altitude mapping orbit (called LAMO, at 239 miles or 285 kilometers altitude) to cover the crater from one side to the other. Kerwan was also too wide to fit within the camera's field of view at Dawn's high-altitude mapping orbit (called HAMO, at 913 miles, 1,470 kilometers). It fit nicely into this frame from Dawn's Survey phase (an altitude of 2,700 miles or 4,400 kilometers), taken shortly after the spacecraft entered orbit in 2015.
Kerwan takes its name from the Hopi spirit of sprouting maize.
This picture was obtained on June 12, 2015. Its center coordinates are 9.8 degrees south latitude, 124.8 degrees east longitude.
Dawn's mission is managed by JPL for NASA's Science Mission Directorate in Washington. Dawn is a project of the directorate's Discovery Program, managed by NASA's Marshall Space Flight Center in Huntsville, Alabama. UCLA is responsible for overall Dawn mission science. Orbital ATK Inc., in Dulles, Virginia, designed and built the spacecraft. The German Aerospace Center, Max Planck Institute for Solar System Research, Italian Space Agency and Italian National Astrophysical Institute are international partners on the mission team.
For a complete list of Dawn mission participants, visit http://dawn.jpl.nasa.gov/mission.
For more information about the Dawn mission, visit http://dawn.jpl.nasa.gov.
Image Credit: NASA/JPL-Caltech/UCLA/MPS/DLR/IDA
Editor: Tony Greicius
Publicado por salud equitativa en 11:50