Beloved disciple. Apostle of apostles. But wife of Jesus?

Today, July 22, is the feast day of St Mary Magdalene, who is one of the best known figures in the Gospels and Christian tradition. This year the liturgical celebration has added dignity because Pope Francis recently elevated it from the status of a simple “memorial” to that of a “feast” on a par with those of the apostles.
The “upgrade” may have caused a ripple of excitement among certain religious scholars and their followers who have been arguing for decades that Mary Magdalene is a far more significant figure than the Church has ever admitted. In their “gospels”, Magdalene (and not Peter) is the first and greatest apostle, closer to Christ precisely because of her feminine insight, recipient of special revelations from him, even his wife or lover. Rejecting all this a “patriarchal” Church, they say, has locked her into the role of penitent sinner.
Has the Pope, then, opened a door to the allegedly suppressed history of Mary Magdalene, through which she may emerge in her full power and glory? Yes, but not in the sense that feminist scholars, let alone Dan Brown, would like. Francis has merely reminded us that there is a richer tradition about Magdalene in the (patriarchal) Church, and it is one that is particularly relevant to the present time. His decree of June 3rd said:

Given that in our time the Church is called to reflect in a more profound way on the dignity of Woman, on the New Evangelisation and on the greatness of the Mystery of Divine Mercy, it seemed right that the example of Saint Mary Magdalene might also fittingly be proposed to the faithful. In fact this woman, known as the one who loved Christ and who was greatly loved by Christ, and was called a “witness of Divine Mercy” by Saint Gregory the Great and an “apostle of the apostles” by Saint Thomas Aquinas, can now rightly be taken by the faithful as a model of women’s role in the Church.

What the Pope has done is brought together three of his own priorities – the role of women in the Church, evangelising those who are not hearing the Gospel, and in particular bringing people the “good news” about God’s merciful love – and told his flock that Mary Magdalene is a model of how to approach all three.
She is pre-eminently a model of feminine discipleship and love for Christ. Peter also loved his Lord passionately, but Mary’s love has the feminine quality of close attentiveness to the person and his needs (she was one of those who supported him out of her own means; she was determined to minister to his hastily-buried body after the Sabbath…). This, of course, in response to his merciful love of her: at their first encounter Christ had driven “seven demons” out of her – which could mean demonic possession, but alternatively a bodily or spiritual sickness.
It has long been accepted by biblical scholars that Magdalene is not the “sinful woman” who washed  Jesus feet with her tears at Simon the Pharisee’s dinner; nor Mary of Bethany, the sister of Martha and Lazarus, who anointed him before his Passion. Early attempts to harmonise the Gospels led to her being identified with both, and Pope Gregory the Great in the sixth century made a declaration to that effect. In the Middle Ages an increasing emphasis on Christ’s sufferings for sinful mankind seems to have led to a narrowing of focus on Magdalene as a model of penitent love – a tradition now of such long standing that it seems pointless to discourage it, so long as her other qualities are recognised. After all, every Christian, even Mary Magdalene in her time, could safely regard himself or herself as a sinner saved by the merciful love of God.
What Pope Francis wants Christians to understand is that they must love mercifully in their turn.
Magdalene is also an “apostle of apostles”, the first to fulfil Christ’s commission to take the Gospel/good news to the others, and therefore a model of what every Christian should be doing. As apostle in this universal sense, she is also a corrective to the idea that the role of women in the Church is to get their fair share of the cultic and governing roles reserved to “the twelve” male apostles.
“Saint Mary Magdalene is an example of true and authentic evangelization; she is an evangelist who announces the joyful central message of Easter,” writes the Pope.
This version of Mary Magdalene, of course, falls far short of what some have come to believe about her since the discovery of the ancient Gnostic “gospels” at Nag Hammadi in Egypt in the middle of last century. With their secret revelations from Jesus to Mary Magdalene and disputes among the apostles about her, these writings, whose purpose was to transmit the teachings of a sectarian tradition, have become a treasure trove for feminist religious scholars, novelists and even shysters with an interest in blowing apart the foundations of the Church. 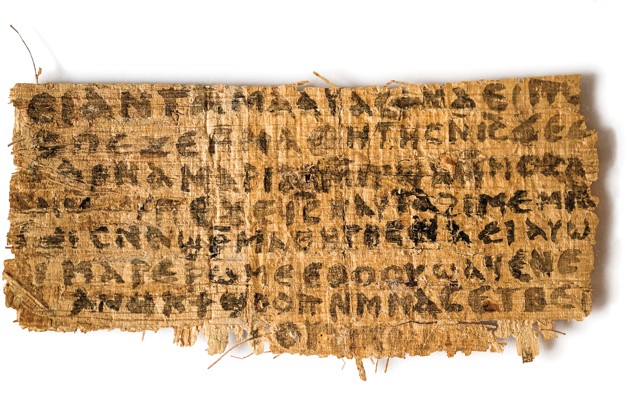 It is an occupation, however, that can be damaging to one’s own reputation as well. Round about the time that Pope Francis was issuing his decree about the feast of St Mary Magdalene, The Atlantic magazine was preparing to publish an article that would seriously undermine the modern myth that Jesus had a wife (probably Mary Magdalene).
It’s a long story – investigative journalist Ariel Sabar seems to have spent much of the last three or four years on it – but briefly, if goes like this. Before 2011 the only “evidence” that Jesus could have been married were the mid-20th century hoax, the Priory of Sion, and its offshoots The Holy Blood and the Holy Grail (1982) and The Da Vinci Code (2003).
But in 2011 the eminent Harvard historian of early Christianity, Karen L. King, acquired what appeared to be an ancient scrap of papyrus, written in Coptic and including the phrase, “Jesus said to them, My wife.” King launched this sensational find at a conference in Rome (where else?) the following year, calling it “The Gospel of Jesus’ Wife.” Despite the doubts of many experts, King has clung to its authenticity.
As a result of Sabar’s work, however, it now appears that the fragment was concocted by Walter Fritz, an ex-pat German living in Florida, and involved among other things in running a porn site with his wife as the star actress, a woman who’d written a book of “universal truths” and claimed to channel the voices of angels, says Sabar. The latter notes the probable influence of the Da Vinci Code on the couple: they launched their first porn site in April 2003, a month after DVC was published. And in his final face-to-face interview with Sabar, Fritz was trying to “sell” him the plot of a great page-turner.
“The book’s subject, he said, would be ‘the Mary Magdalene story,’ the ‘suppression of the female element’ in the Church, and the primacy of the Gnostic gospels, ‘maybe accumulating to a thriller story in the present.
"It sounded an awful lot like The Da Vinci Code," added Sabar.
King for her part had never checked Fritz’s credentials or the provenance of the fragment. It seems she badly wanted to believe it was genuine, though she has now conceded that it is probably a forgery. Still, she can’t find it in her heart to be angry with the man. “I’m mostly just relieved, she tells Sabar. “I think the truth always makes me calm.”
Perhaps the lesson of this embarrassing episode is that the truth is not to be found in accidental discoveries, but in a living tradition that stretches back to the apostles, and to the Gospels they approved. What could they have told us about Mary Magdalene that is more beautiful and powerful than what is already there?
Carolyn Moynihan is deputy editor of MercatorNet.

For your weekend reading we have a very important article on the science of addiction -- to pornography in this case -- and how it can be overcome, plus a short interview with the author, psychiatrist Kevin Majeres.
We continue to hear how increasing numbers of men, mainly, are exposed to porn and become hooked on it. Dr Majeres, who used cognitive behavioural therapy with people who want to break with addictive behaviours and he teaches the method at Harvard Medical School. But he has also just launched a website to reach more people and has another site in the pipeline. What is most important about his approach is its optimism: it is possible to overcome these cravings, he insists.