Uranus May Have Two 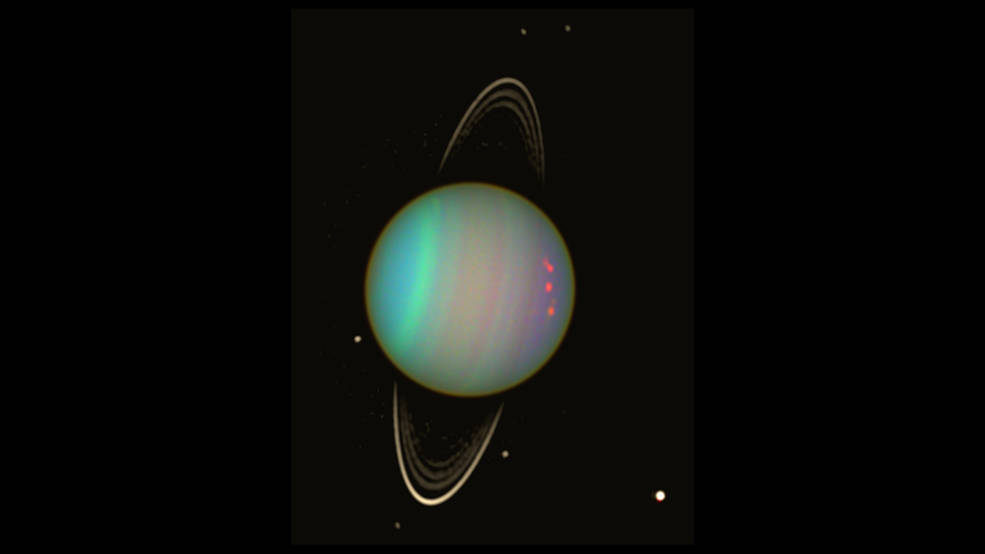 Uranus is seen in this false-color view from NASA's Hubble Space Telescope from August 2003. The brightness of the planet's faint rings and dark moons has been enhanced for visibility.
Credits: NASA/Erich Karkoschka (Univ. Arizona)
NASA's Voyager 2 spacecraft flew by Uranus 30 years ago, but researchers are still making discoveries from the data it gathered then. A new study led by University of Idaho researchers suggests there could be two tiny, previously undiscovered moonlets orbiting near two of the planet’s rings.
Rob Chancia, a University of Idaho doctoral student, spotted key patterns in the rings while examining decades-old images of Uranus' icy rings taken by Voyager 2 in 1986. He noticed the amount of ring material on the edge of the alpha ring -- one of the brightest of Uranus' multiple rings -- varied periodically. A similar, even more promising pattern occurred in the same part of the neighboring beta ring.
"When you look at this pattern in different places around the ring, the wavelength is different -- that points to something changing as you go around the ring. There's something breaking the symmetry," said Matt Hedman, an assistant professor of physics at the University of Idaho, who worked with Chancia to investigate the finding. Their results will be published in The Astronomical Journal and have been posted to the pre-press site arXiv.
Chancia and Hedman are well-versed in the physics of planetary rings: both study Saturn's rings using data from NASA's Cassini spacecraft, which is currently orbiting Saturn. Data from Cassini have yielded new ideas about how rings behave, and a grant from NASA allowed Chancia and Hedman to examine Uranus data gathered by Voyager 2 in a new light. Specifically, they analyzed radio occultations -- made when Voyager 2 sent radio waves through the rings to be detected back on Earth -- and stellar occultations, made when the spacecraft measured the light of background stars shining through the rings, which helps reveal how much material they contain.
They found the pattern in Uranus' rings was similar to moon-related structures in Saturn's rings called moonlet wakes.
The researchers estimate the hypothesized moonlets in Uranus' rings would be 2 to 9 miles (4 to 14 kilometers) in diameter -- as small as some identified moons of Saturn, but smaller than any of Uranus' known moons. Uranian moons are especially hard to spot because their surfaces are covered in dark material.
"We haven't seen the moons yet, but the idea is the size of the moons needed to make these features is quite small, and they could have easily been missed," Hedman said. "The Voyager images weren't sensitive enough to easily see these moons."
Hedman said their findings could help explain some characteristics of Uranus' rings, which are strangely narrow compared to Saturn's. The moonlets, if they exist, may be acting as "shepherd" moons, helping to keep the rings from spreading out. Two of Uranus' 27 known moons, Ophelia and Cordelia, act as shepherds to Uranus' epsilon ring.
“The problem of keeping rings narrow has been around since the discovery of the Uranian ring system in 1977 and has been worked on by many dynamicists over the years,” Chancia said. “I would be very pleased if these proposed moonlets turn out to be real and we can use them to approach a solution.”
Confirming whether or not the moonlets actually exist using telescope or spacecraft images will be left to other researchers, Chancia and Hedman said. They will continue examining patterns and structures in Uranus’ rings, helping uncover more of the planet’s many secrets.
"It's exciting to see Voyager 2's historic Uranus exploration still contributing new knowledge about the planets," said Ed Stone, project scientist for Voyager, based at Caltech, Pasadena, California.
Voyager 2 and its twin, Voyager 1, were launched 16 days apart in 1977. Both spacecraft flew by Jupiter and Saturn, and Voyager 2 also flew by Uranus and Neptune. Voyager 2 is the longest continuously operated spacecraft. It is expected to enter interstellar space in a few years, joining Voyager 1, which crossed over in 2012. Though far past the planets, the mission continues to send back unprecedented observations of the space environment in the solar system, providing crucial information on the environment our spacecraft travel through as we explore farther and farther from home.
NASA's Jet Propulsion Laboratory, a division of Caltech in Pasadena, California, built the twin Voyager spacecraft and operates them for the Heliophysics Division within NASA's Science Mission Directorate in Washington.
For more information about Voyager, visit:
http://voyager.jpl.nasa.gov
Elizabeth LandauJet Propulsion Laboratory, Pasadena, Calif.818-354-6425Elizabeth.Landau@jpl.nasa.gov
Tara RobertsUniversity of Idaho Communications208-885-2097troberts@uidaho.edu
Written by Tara Roberts
Editor: Tony Greicius