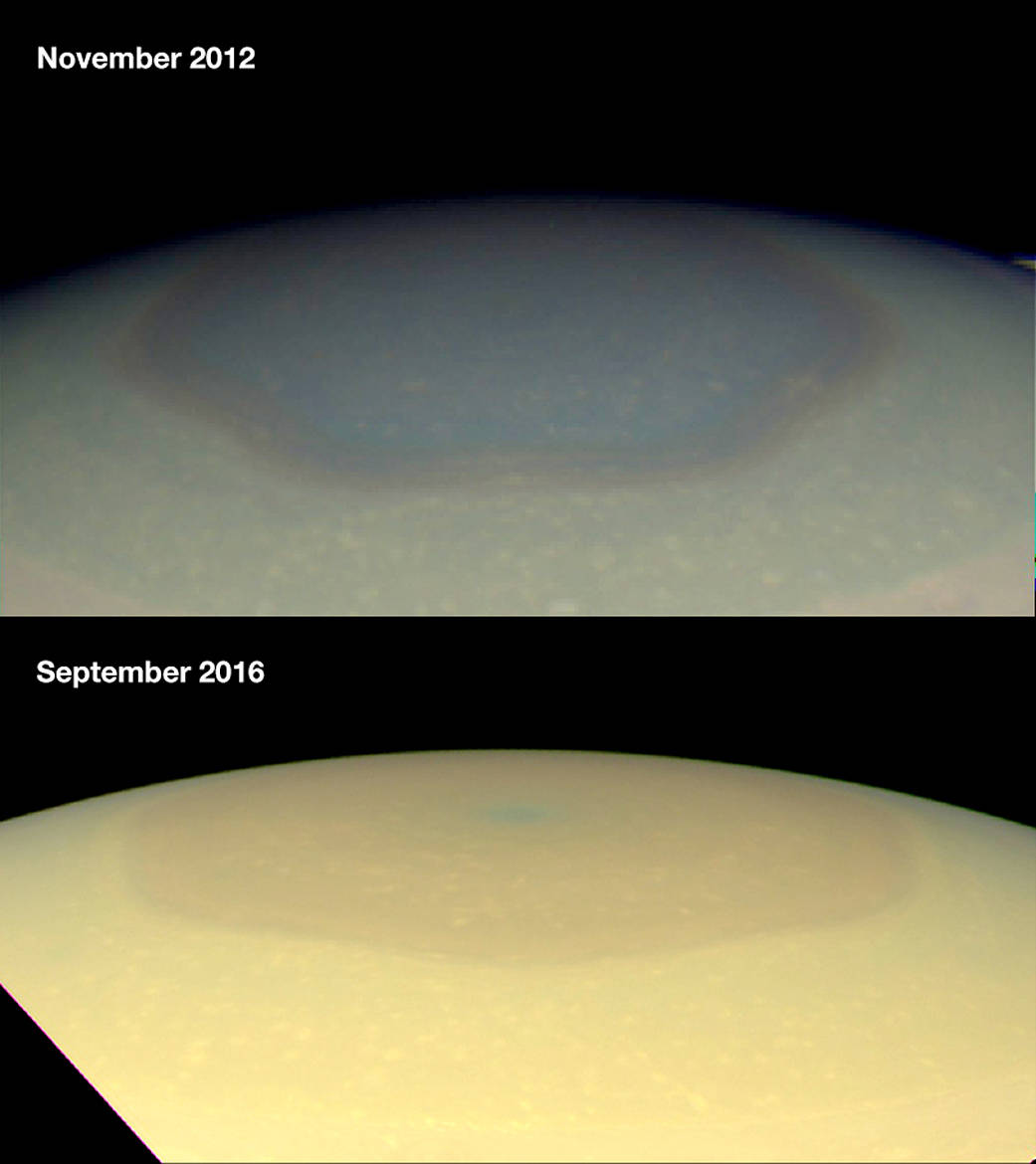 These two natural color images from NASA's Cassini spacecraft show the changing appearance of Saturn's north polar region between 2012 and 2016.
Scientists are investigating potential causes for the change in color of the region inside the north-polar hexagon on Saturn. The color change is thought to be an effect of Saturn's seasons. In particular, the change from a bluish color to a more golden hue may be due to the increased production of photochemical hazes in the atmosphere as the north pole approaches summer solstice in May 2017.
Researchers think the hexagon, which is a six-sided jetstream, might act as a barrier that prevents haze particles produced outside it from entering. During the seven-year-long Saturnian winter, the polar atmosphere became clear of aerosols produced by photochemical reactions -- reactions involving sunlight and the atmosphere. Since the planet experienced equinox in August 2009, the polar atmosphere has been basking in continuous sunshine, and aerosols are being produced inside of the hexagon, around the north pole, making the polar atmosphere appear hazy today.
Other effects, including changes in atmospheric circulation, could also be playing a role. Scientists think seasonally shifting patterns of solar heating probably influence the winds in the polar regions.
Both images were taken by the Cassini wide-angle camera.
The Cassini mission is a cooperative project of NASA, ESA (the European Space Agency) and the Italian Space Agency. The Jet Propulsion Laboratory, a division of Caltech in Pasadena, manages the mission for NASA's Science Mission Directorate, Washington. The Cassini orbiter and its two onboard cameras were designed, developed and assembled at JPL. The imaging operations center is based at the Space Science Institute in Boulder, Colorado.
For more information about the Cassini-Huygens mission visit http://saturn.jpl.nasa.gov and http://www.nasa.gov/cassini. The Cassini imaging team homepage is at http://ciclops.org.
Image Credit: NASA/JPL-Caltech/Space Science Institute/Hampton University
Editor: Tony Greicius