LA SOMBRA ▲ In Daylight on the Night Side | NASA

In Daylight on the Night Side | NASA

In Daylight on the Night Side 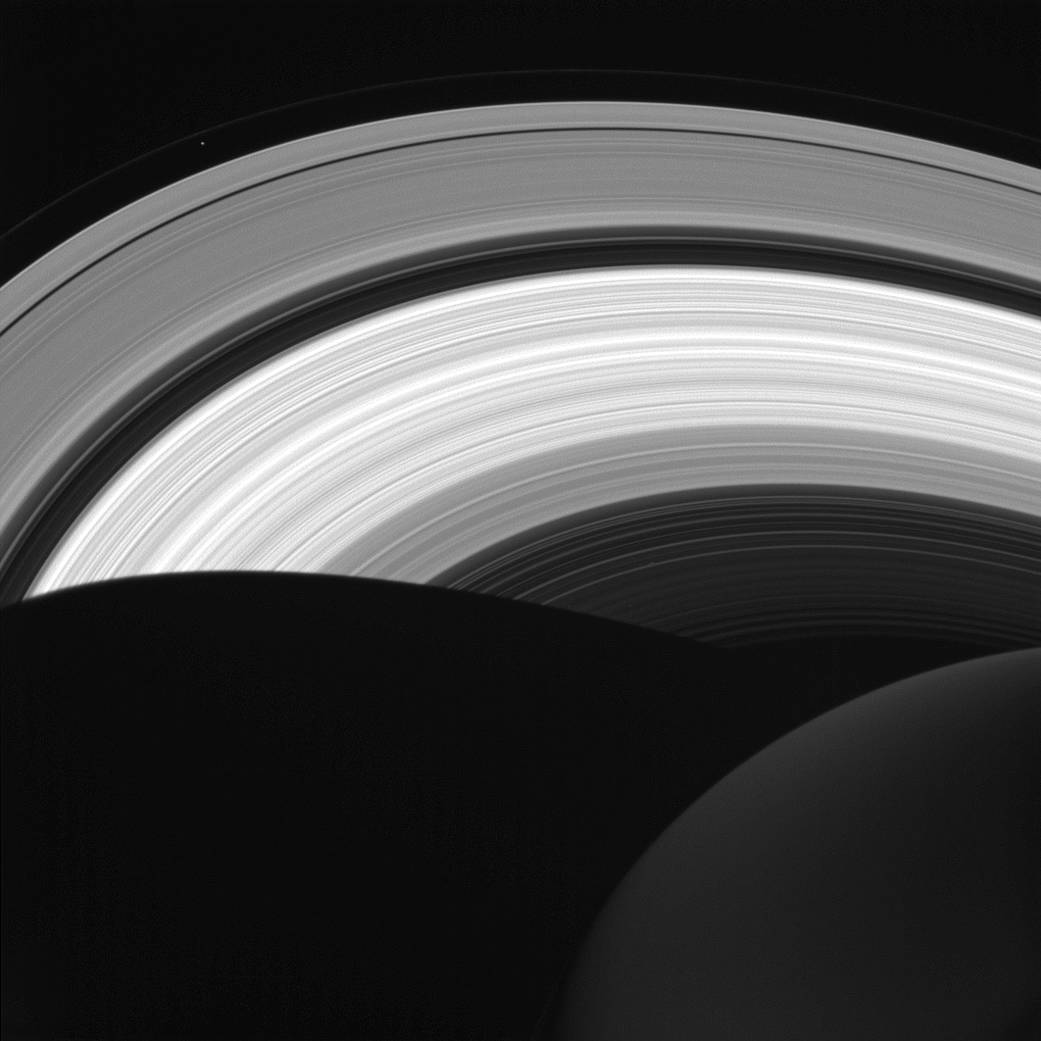 NASA's Cassini spacecraft looks down at the rings of Saturn from above the planet's nightside. The darkened globe of Saturn is seen here at lower right, along with the shadow it casts across the rings.
The image shows that even on the planet's night side, the rings remain in sunlight, apart from the portion that lies within Saturn's shadow. The rings also reflect sunlight back onto the night side of the planet, making it appear brighter than it would otherwise appear.
Saturn's small moon Prometheus (53 miles or 86 kilometers across) is faintly visible as a speck near upper left. The shadow of Saturn was once long enough to stretch to the orbit of Prometheus. But as northern summer solstice approaches, Saturn's shadow no longer reaches that far (see PIA20498). So Prometheus will not move into the darkness of the planet's shadow until the march of the seasons again causes the shadow to lengthen.
This view looks toward the sunlit side of the rings from about 41 degrees above the ring plane. The image was taken in visible light with the Cassini spacecraft wide-angle camera on Aug. 14, 2016.
The view was obtained at a distance of approximately 870,000 miles (1.4 million kilometers) from Saturn and at a Sun-Saturn-spacecraft, or phase, angle of 87 degrees. Image scale is 53 miles (86 kilometers) per pixel. Prometheus has been brightened by a factor of two to enhance its visibility.
The Cassini mission is a cooperative project of NASA, ESA (the European Space Agency) and the Italian Space Agency. The Jet Propulsion Laboratory, a division of the California Institute of Technology in Pasadena, manages the mission for NASA's Science Mission Directorate, Washington. The Cassini orbiter and its two onboard cameras were designed, developed and assembled at JPL. The imaging operations center is based at the Space Science Institute in Boulder, Colorado.
For more information about the Cassini-Huygens mission visit http://saturn.jpl.nasa.gov and http://www.nasa.gov/cassini. The Cassini imaging team homepage is at http://ciclops.org.
Image Credit: NASA/JPL-Caltech/Space Science Institute
Editor: Tony Greicius