the Most Extreme Blazars Yet


NASA's Fermi Gamma-ray Space Telescope has identified the farthest gamma-ray blazars, a type of galaxy whose intense emissions are powered by supersized black holes. Light from the most distant object began its journey to us when the universe was 1.4 billion years old, or nearly 10 percent of its present age.
NASA's Fermi Gamma-ray Space Telescope has discovered the five most distant gamma-ray blazars yet known. The light detected by Fermi left these galaxies by the time the universe was two billion years old. Two of these galaxies harbor billion-solar-mass black holes that challenge current ideas about how quickly such monsters could grow.
Credits: NASA's Goddard Space Flight Center/Scott Wiessinger, producer
Download this video in HD formats from NASA Goddard's Scientific Visualization Studio
"Despite their youth, these far-flung blazars host some of the most massive black holes known," said Roopesh Ojha, an astronomer at NASA's Goddard Space Flight Center in Greenbelt, Maryland. "That they developed so early in cosmic history challenges current ideas of how supermassive black holes form and grow, and we want to find more of these objects to help us better understand the process."
Ojha presented the findings Monday, Jan. 30, at the American Physical Society meeting in Washington, and a paper describing the results has been submitted to The Astrophysical Journal Letters.
Blazars constitute roughly half of the gamma-ray sources detected by Fermi's Large Area Telescope (LAT). Astronomers think their high-energy emissions are powered by matter heated and torn apart as it falls from a storage, or accretion, disk toward a supermassive black hole with a million or more times the sun's mass. A small part of this infalling material becomes redirected into a pair of particle jets, which blast outward in opposite directions at nearly the speed of light. Blazars appear bright in all forms of light, including gamma rays, the highest-energy light, when one of the jets happens to point almost directly toward us. 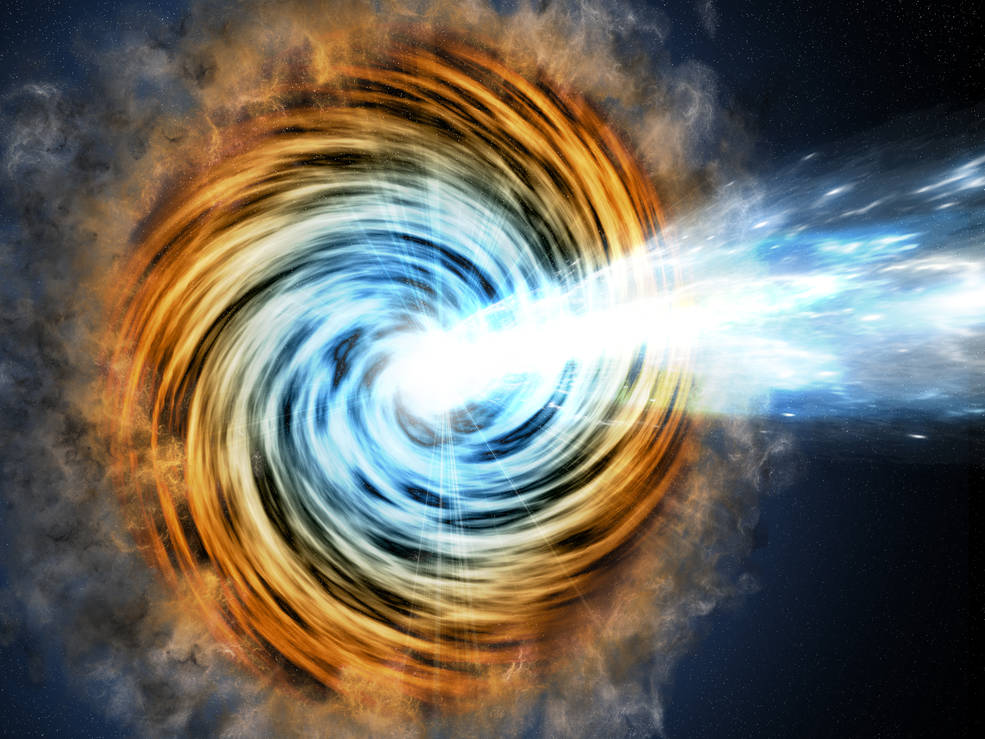 Black-hole-powered galaxies called blazars are the most common sources detected by NASA's Fermi. As matter falls toward the supermassive black hole at the galaxy's center, some of it is accelerated outward at nearly the speed of light along jets pointed in opposite directions. When one of the jets happens to be aimed in the direction of Earth, as illustrated here, the galaxy appears especially bright and is classified as a blazar.
Credits: M. Weiss/CfA
Previously, the most distant blazars detected by Fermi emitted their light when the universe was about 2.1 billion years old. Earlier observations showed that the most distant blazars produce most of their light at energies right in between the range detected by the LAT and current X-ray satellites, which made finding them extremely difficult.
Then, in 2015, the Fermi team released a full reprocessing of all LAT data, called Pass 8, that ushered in so many improvements astronomers said it was like having a brand new instrument. The LAT's boosted sensitivity at lower energies increased the chances of discovering more far-off blazars.
The research team was led by Vaidehi Paliya and Marco Ajello at Clemson University in South Carolina and included Dario Gasparrini at the Italian Space Agency's Science Data Center in Rome as well as Ojha. They began by searching for the most distant sources in a catalog of 1.4 million quasars, a galaxy class closely related to blazars. Because only the brightest sources can be detected at great cosmic distances, they then eliminated all but the brightest objects at radio wavelengths from the list. With a final sample of about 1,100 objects, the scientists then examined LAT data for all of them, resulting in the detection of five new gamma-ray blazars.
Expressed in terms of redshift, astronomers' preferred measure of the deep cosmos, the new blazars range from redshift 3.3 to 4.31, which means the light we now detect from them started on its way when the universe was between 1.9 and 1.4 billion years old, respectively.
"Once we found these sources, we collected all the available multiwavelength data on them and derived properties like the black hole mass, the accretion disk luminosity, and the jet power," said Paliya.
Two of the blazars boast black holes of a billion solar masses or more. All of the objects possess extremely luminous accretion disks that emit more than two trillion times the energy output of our sun. This means matter is continuously falling inward, corralled into a disk and heated before making the final plunge to the black hole.
"The main question now is how these huge black holes could have formed in such a young universe," said Gasparrini. "We don't know what mechanisms triggered their rapid development."
In the meantime, the team plans to continue a deep search for additional examples.
"We think Fermi has detected just the tip of the iceberg, the first examples of a galaxy population that previously has not been detected in gamma rays," said Ajello.
NASA's Fermi Gamma-ray Space Telescope is an astrophysics and particle physics partnership, developed in collaboration with the U.S. Department of Energy and with important contributions from academic institutions and partners in France, Germany, Italy, Japan, Sweden and the United States.
For more information on Fermi, visit:
https://www.nasa.gov/fermi
​Related