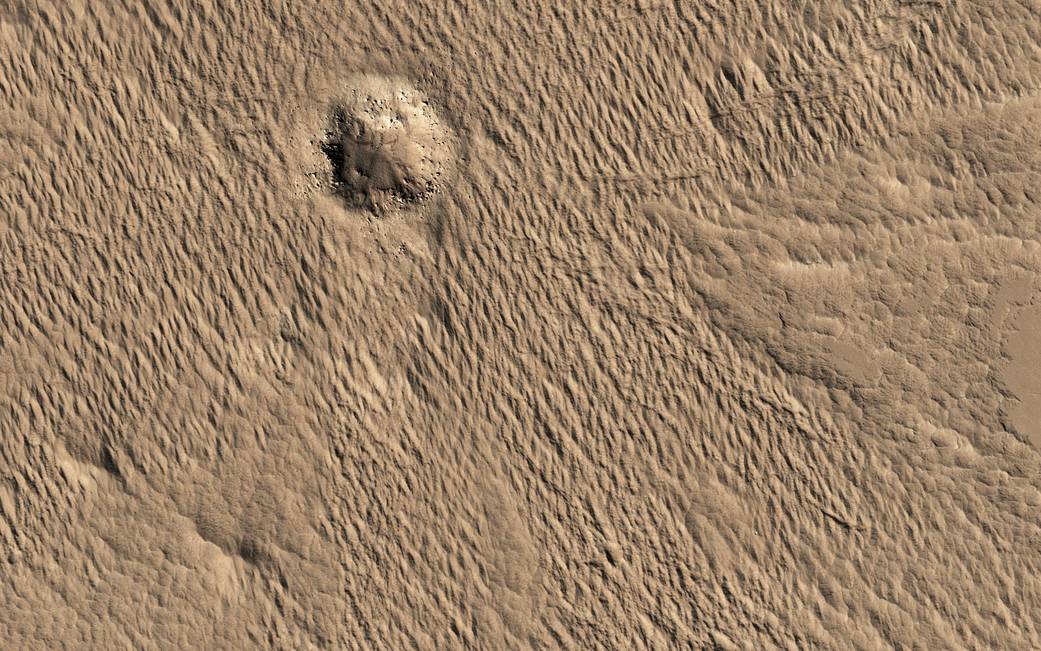 A close-up image from NASA's Mars Reconnaissance Orbiter of a recent 150-meter diameter impact crater near Amazonis Mensa and Medusae Fossae is another great example of geologic complexity of Mars. The spider web-like texture of this crater is intriguing. But what does it mean?
On Earth, we have many geologic mechanisms that embrace the surface of the planet in an almost constant state of metamorphosis. Although Mars is not nearly as geologically active as Earth, it is still a host to many processes that shape its surface even today (e.g., aeolian modification, periglacial processes, recent impacts, etc.). The appearance of the ejecta of this crater is likely a combination of both the characteristics of the target material it was deposited on, and processes that modified and degraded it over time.
When we look to other images in this region we find a similar texture. This texture is referred to as â??yardangsâ? by scientists who study wind erosion. Yardangs are streamlined ridge-and-trough patterns formed by the erosion of wind dominating from a specific direction; in this particular case, from the southeast to the northwest. The specific direction of the winds is supported by regional context images that show many craters in the region have wind streak "tails" that points to the northwest.
Craters of this size have been observed to form recently on Mars, so the fact that this crater is modified speaks volumes, and gives us a chance to decode some geological messages from Mars.
The map is projected here at a scale of 25 centimeters (9.8 inches) per pixel. [The original image scale is 27.7 centimeters (10.9 inches) per pixel (with 1 x 1 binning); objects on the order of 55.4 centimeters (21.8 inches) across are resolved.] North is up.
The University of Arizona, Tucson, operates HiRISE, which was built by Ball Aerospace & Technologies Corp., Boulder, Colo. NASA's Jet Propulsion Laboratory, a division of Caltech in Pasadena, California, manages the Mars Reconnaissance Orbiter Project for NASA's Science Mission Directorate, Washington.
Image credit: NASA/JPL-Caltech/Univ. of Arizona
Image download options
Editor: Tony Greicius
Publicado por salud equitativa en 12:42