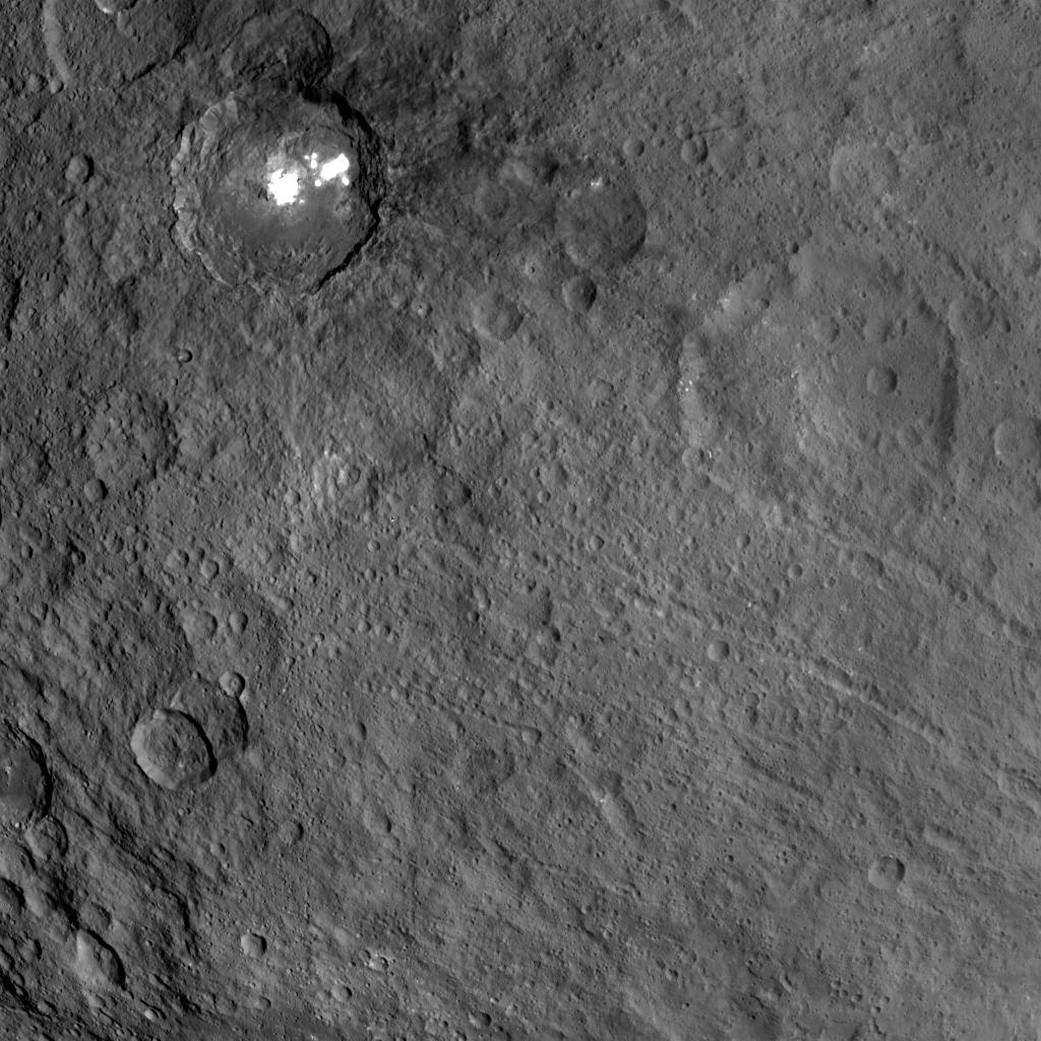 This view obtained by NASA's Dawn spacecraft during its Survey orbit illustrates the diversity and complexity of Ceres' geology. It shows familiar features: Occator Crater with its bright deposits (called faculae) of carbonates and other salts, a series of linear features (at right) called Samhain Catenae, and another large crater on the right side of the image called Kirnis. A relatively fresh crater called Lociyo, superimposed on an older crater, can be seen toward the bottom left of the picture. These features can be found on this map of Ceres.
Studying the morphologies and relationships between various types of geological features can help scientists reconstruct Ceres' history. Occator appears to be one of the youngest features in this picture, except for a couple of smaller craters. The 71-mile-wide (115-kilometer-wide) Kirnis Crater on the other hand is an old, eroded crater. It owes its peculiar polygonal shape in part to its overlap with one of the Samhain Catenae. This illustrates the role of fractures in driving the geometry of some of Ceres' craters. The origin of these particular catenae is not understood yet, and is not necessarily related to the Pongal Catena, recently featured in PIA21408.
Kirnis Crater is named after a Lithuanian spirit-guardian of cherry trees, whereas the Samhain Catenae refer to a Gaelic festival organized at the end of the harvest season. It was observed in Ireland and Scotland during seven days in October and November, nearly halfway between the autumn equinox and the winter solstice.
This picture was obtained on June 25, 2015, from an altitude of 2,700 miles (4,400 kilometers). It is centered at 1.7 degrees north latitude, and 249 degrees east longitude.
Dawn's mission is managed by JPL for NASA's Science Mission Directorate in Washington. Dawn is a project of the directorate's Discovery Program, managed by NASA's Marshall Space Flight Center in Huntsville, Alabama. UCLA is responsible for overall Dawn mission science. Orbital ATK Inc., in Dulles, Virginia, designed and built the spacecraft. The German Aerospace Center, Max Planck Institute for Solar System Research, Italian Space Agency and Italian National Astrophysical Institute are international partners on the mission team.
For a complete list of Dawn mission participants, visit http://dawn.jpl.nasa.gov/mission.
For more information about the Dawn mission, visit http://dawn.jpl.nasa.gov.
Image credit: NASA/JPL-Caltech/UCLA/MPS/DLR/IDA
Image download options
Editor: Tony Greicius
Publicado por salud equitativa en 12:45