Researchers at the University of Texas San Antonio using observations from NASA’s Stratospheric Observatory for Infrared Astronomy, SOFIA, found that the dust surrounding active, ravenous black holes is much more compact than previously thought.
Most, if not all, large galaxies contain a supermassive black hole at their centers. Many of these black holes are relatively quiet and inactive, like the one at the center of our Milky Way galaxy. However, some supermassive black holes are currently consuming significant amounts of material that are being drawn into them, resulting in the emission of huge amounts of energy. These active black holes are called active galactic nuclei.
Previous studies have suggested that all active galactic nuclei have essentially the same structure. Models indicate that active galactic nuclei have a donut-shaped dust structure, known as a torus, surrounding the supermassive black hole. Using the instrument called the Faint Object infraRed CAmera for the SOFIA Telescope, FORCAST, the team observed the infrared emissions around 11 supermassive black holes in active galactic nuclei located at distances of 100 million light years and more, and determined the size, opacity, and distribution of dust in each torus.
In a paper published in the Monthly Notices of the Royal Astronomical Society, the team reports that the tori are 30 percent smaller than predicted and that the peak infrared emission is at even longer infrared wavelengths than previously estimated. The implication is that the dust obscuring the central black hole is more compact that previously thought.
They also indicate that active galactic nuclei radiate most of their energy at wavelengths that are not observable from the ground because the energy is absorbed by water vapor in Earth’s atmosphere. SOFIA flies above 99 percent of the Earth’s water vapor, enabling the research group to characterize the properties of the torus-shaped dust structures at far-infrared wavelengths. 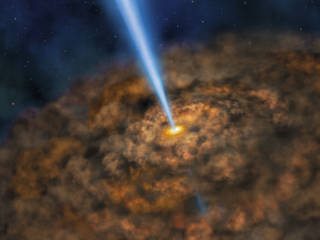 Artist illustration of the thick ring of dust that can obscure the energetic processes that occur near the supermassive black hole of an active galactic nuclei. The SOFIA studies suggest that the dust distribution is about 30 percent smaller than previously thought.
Credits: NASA/SOFIA/Lynette Cook
“Using SOFIA, we were able to obtain the most spatially detailed observations possible at these wavelengths, allowing us to make new discoveries on the characterization of active galactic nuclei dust tori,” said Lindsay Fuller, graduate student at the University of Texas San Antonio and lead author of the published paper.
Future observations are necessary to determine whether or not all of the observed emission originates with the tori, or if there is some other component adding to the total emission of the active galactic nuclei. Enrique Lopez-Rodriguez, principal investigator of this project and Universities Space Research Association staff scientist at the SOFIA Science Center said, “Next, our goal will be to use SOFIA to observe a larger sample of active galactic nuclei, and at longer wavelengths. That will allow us to put tighter constraints on the physical structure of the dusty environment surrounding the active galactic nuclei.”
SOFIA is a Boeing 747SP jetliner modified to carry a 100-inch diameter telescope. It is a joint project of NASA and the German Aerospace Center, DLR. NASA’s Ames Research Center in California’s Silicon Valley manages the SOFIA program, science and mission operations in cooperation with the Universities Space Research Association headquartered in Columbia, Maryland, and the German SOFIA Institute (DSI) at the University of Stuttgart. The aircraft is based at NASA’s Armstrong Flight Research Center's Hangar 703, in Palmdale, California.
Media Point of Contact
Nicholas A. VeronicoNVeronico@sofia.usra.edu • SOFIA Science CenterNASA Ames Research Center, Moffett Field, California
Editor: Kassandra Bell
Publicado por salud equitativa en 6:03