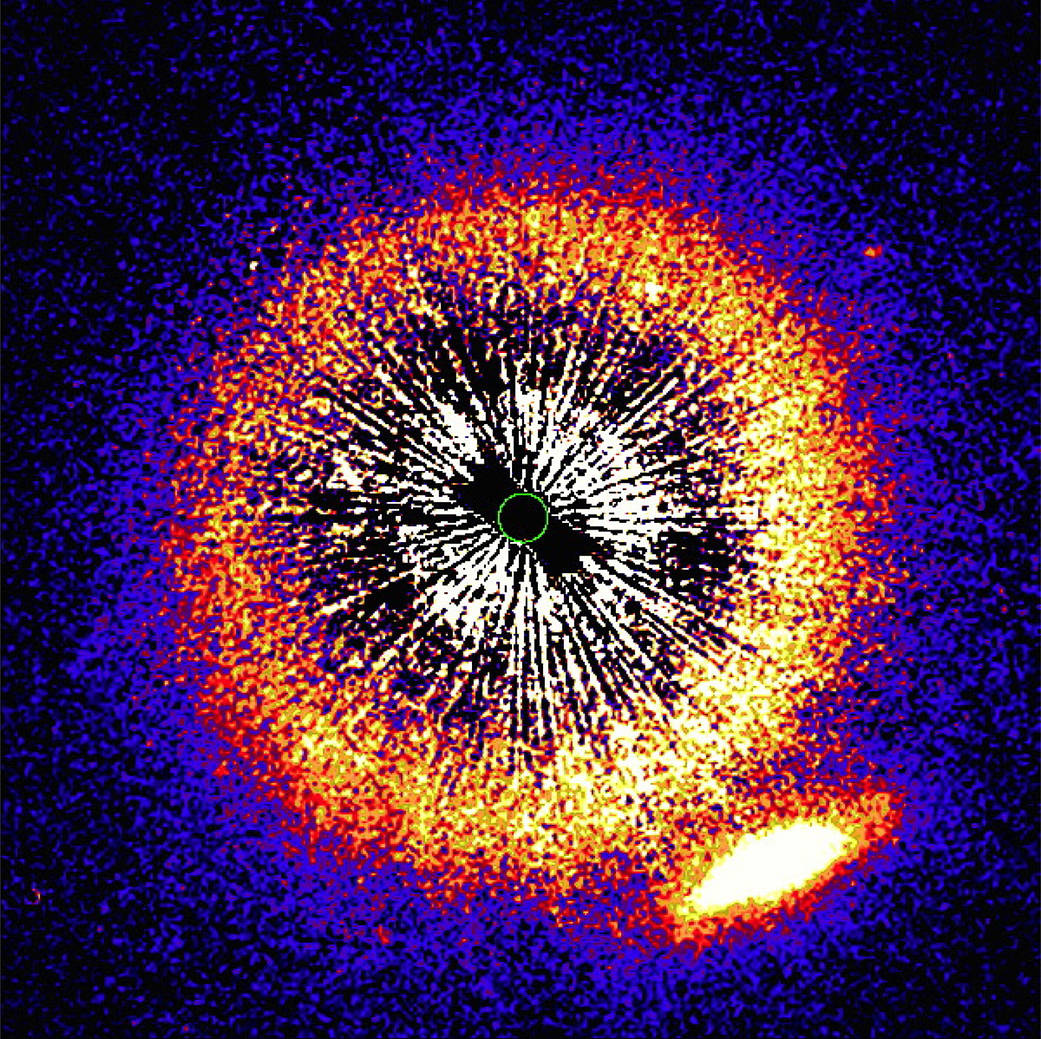 The NASA/ESA Hubble Space Telescope is famous for its jaw-dropping snapshots of the cosmos. At first glance this Picture of the Week appears to be quite the opposite, showing just a blur of jagged spikes, speckled noise, and weird, clashing colors — but once you know what you are looking at, images like this one are no less breathtaking.

Got a stellar Hubble image on a T-shirt? Or maybe you’ve spotted a Hubble tattoo! Share your photos on Instagram, Twitter, Flickr and Facebook with #SpotHubble and maybe you’ll get a shout-out from @NASAHubble!
Credits: NASA's Goddard Space Flight Center/Jenny Hottle
Learn More about #SpotHubble
This shows a distant galaxy — visible as the smudge to the lower right — as it begins to align with and pass behind a star sitting nearer to us within the Milky Way. This is an event known as a transit. The star is called HD 107146, and it sits at the center of the frame. Its light has been blocked in this image to make its immediate surroundings and the faint galaxy visible — the position of the star is marked with a green circle.
The concentric orange circle surrounding HD 107146 is a circumstellar disk — a disk of debris orbiting the star. In the case of HD 107146 we see the disk face-on. As this star very much resembles our sun, it is an interesting scientific target to study: its circumstellar disk could be analogous to the asteroids in our Solar System and the Kuiper belt.
A detailed study of this system is possible because of the much more distant galaxy — nicknamed the “Vermin Galaxy” by some to reflect their annoyance at its presence — as the star passes in front of it. The unusual pairing was first observed in 2004 by Hubble’s Advanced Camera for Surveys, and again in 2011 by Hubble’s Space Telescope Imaging Spectrograph. The latter image is shown here, as the Vermin Galaxy began its transit behind HD 107146. The galaxy will not be fully obscured until around 2020, but interesting science can be done even while the galaxy is only partly obscured. Light from the galaxy will pass through the star’s debris disks before reaching our telescopes, allowing us to study the properties of the light and how it changes, and thus infer the characteristics of the disk itself.
Image credit: ESA/Hubble & NASA
Text credit: European Space Agency
Editor: Karl Hille
Publicado por salud equitativa en 11:17