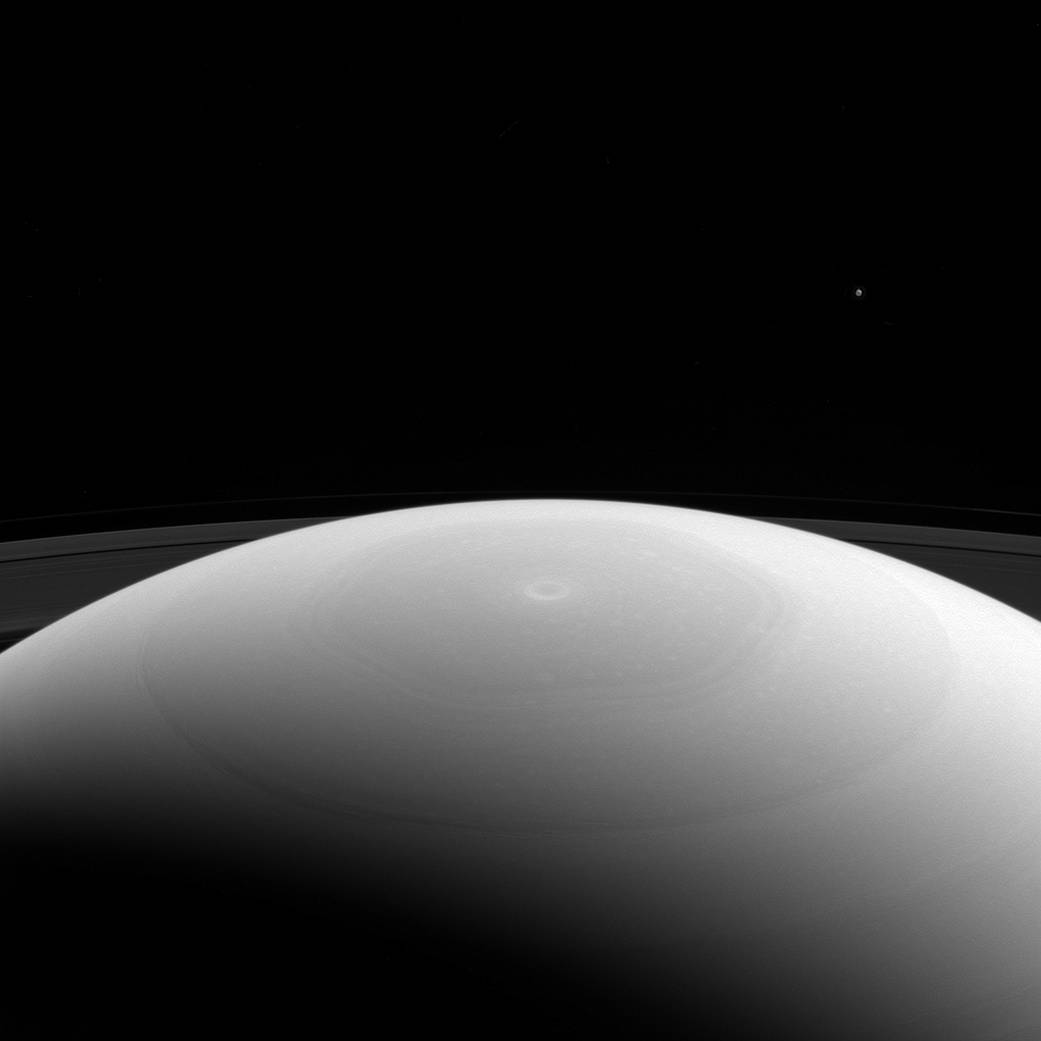 From high above Saturn's northern hemisphere, NASA's Cassini spacecraft gazes over the planet's north pole, with its intriguing hexagon and bullseye-like central vortex.
Saturn's moon Mimas is visible as a mere speck near upper right. At 246 miles (396 kilometers across) across, Mimas is considered a medium-sized moon. It is large enough for its own gravity to have made it round, but isn't one of the really large moons in our solar system, like Titan. Even enormous Titan is tiny beside the mighty gas giant Saturn.
This view looks toward Saturn from the sunlit side of the rings, from about 27 degrees above the ring plane. The image was taken in green light with the Cassini spacecraft wide-angle camera on March 27, 2017.
The view was acquired at a distance of approximately 617,000 miles (993,000 kilometers) from Saturn. Image scale is 37 miles (59 kilometers) per pixel. Mimas' brightness has been enhanced by a factor of 3 in this image to make it easier to see.
The Cassini mission is a cooperative project of NASA, ESA (the European Space Agency) and the Italian Space Agency. The Jet Propulsion Laboratory, a division of the California Institute of Technology in Pasadena, manages the mission for NASA's Science Mission Directorate, Washington. The Cassini orbiter and its two onboard cameras were designed, developed and assembled at JPL. The imaging operations center is based at the Space Science Institute in Boulder, Colorado.
For more information about the Cassini-Huygens mission visit http://saturn.jpl.nasa.gov and http://www.nasa.gov/cassini. The Cassini imaging team homepage is at http://ciclops.org.
Credit: NASA/JPL-Caltech/Space Science Institute
Editor: Tony Greicius
Publicado por salud equitativa en 12:26