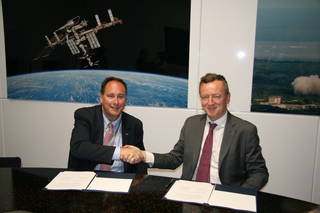 NASA acting Administrator Robert Lightfoot and Roberto Battiston, president of Italy's space agency Agenzia Spaziale Italiana, conclude the signing of a cooperative agreement for the IXPE space science mission with a handshake June 20, 2017, at the 52nd International Paris Air Show at Le Bourget.
Credits: ASI/ Giuseppina Piccirilli
A new partnership forged between NASA and Italy's space agency paves the way for a breakthrough mission to explore some of the most turbulent and extreme environments in our universe -- from the hottest, messiest star factories to violent jets screaming away from monster black holes.
Robert Lightfoot, NASA's acting administrator, signed an agreement June 20 with Roberto Battiston, president of the Italian Space Agency (ASI), defining the terms of cooperation for the Imaging X-ray Polarimetry Explorer (IXPE) mission during a ceremony at the Paris Air Show in Le Bourget.
"NASA welcomes the opportunity to work with ASI on this mission, to build upon a history of strong cooperation between our agencies in the space sciences," said Lightfoot. "We wish all those working on IXPE great success in the years ahead, and we eagerly anticipate the scientific promise of this exciting space science mission."
"With this agreement Italy confirms to play a leading role in the scientific field of high energy studies," said Battiston. "The development of IXPE is the result of the great teamwork of ASI, of the National Institute of Astrophysics (INAF), National Institute of Nuclear Physics (INFN), Roma 3 University and more in general of the entire Italian aerospace sector. This cooperation with NASA is the demonstration of the high standard of our work."
The IXPE mission, slated to launch in 2020, will fly three telescope systems capable of measuring the polarization of X-rays emitted by cosmic sources. By taking advantage of polarization as a tool for exploration, IXPE will provide important clues about the origins of cosmic X-rays and their interactions with matter and gravity as they travel through space.
ASI will contribute IXPE's sophisticated "eyes" -- three polarization-sensitive X-ray detectors which were developed in Italy -- and the use of its equatorial ground station located at Malindi, Kenya.
NASA will supply the X-ray telescopes and use of its facilities to perform end-to-end X-ray calibration and science operations.
Ball Aerospace in Broomfield, Colorado, will provide the spacecraft and mission integration. Ball Aerospace will also operate the flight system with support from the Laboratory for Atmospheric and Space Physics at the University of Colorado at Boulder.
Other partners include Stanford University, McGill University and the Massachusetts Institute of Technology.
IXPE is next in the line of Small Explorer missions. NASA's Goddard Space Flight Center in Greenbelt, Maryland, manages the Explorers Program. NASA’s Marshall Space Flight Center in Huntsville, Alabama, leads the mission for the agency’s Science Mission Directorate in Washington.
Molly PorterMarshall Space Flight Center, Huntsville, Ala.256-544-0034molly.a.porter@nasa.gov
Editor: Lee Mohon
Publicado por salud equitativa en 11:52