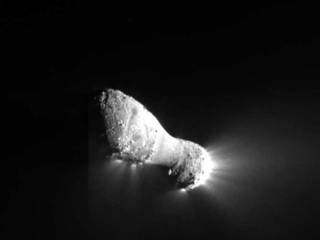 Comet Hartley 2 can be seen in detail in this image from NASA's EPOXI mission. It was taken as the spacecraft flew by from about 435 miles. The comet's nucleus, or main body, is about 1.2 miles long. Jets can be seen streaming out of the nucleus. A Goddard team would like to use a microbolometer to study these objects in greater detail.
Credits: NASA
Two NASA teams want to deploy a highly compact, sensitive thermometer that could characterize comets and even assist in the redirection or possible destruction of an asteroid on a collision course with Earth.
In two technology-development efforts, researchers at NASA’s Goddard Space Flight Center in Greenbelt, Maryland, are baselining the use of a Goddard-designed infrared microbolometer camera — whose cross section is just slightly larger than a quarter — to study near primitive objects formed during the solar system’s origin 4.5 billion years ago.
The multi-spectral instrument, called the Comet CAMera, or ComCAM, was designed in part by Goddard scientist Shahid Aslam. He worked closely with the device’s manufacturer, the Canadian-based National Optics Institute, to design the compact optics and integrated filters that make the device sensitive to chemical compounds, like water and carbon dioxide, which are of interest to cometary scientists.
Thermal sensors, like ComCAM, measure infrared or heat radiation, and are, in essence, very sensitive thermometers. When radiation strikes an absorptive element, the element heats and experiences a change in the electrical resistance, which is proportional to and can be used to derive the temperature. These measurements provide insights into the physical properties of the object being studied. Scientists often use them to study very distant stars and galaxies in the universe.
Microbolometers used to study galaxies and the interstellar medium in the far-infrared and submillimeter wavelength bands require super cooling, which typically is done by placing the sensor inside a cryogenically cooled canister.
In sharp contrast, infrared microbolometers like the one developed in part by Aslam operate with minimal cooling and do not require placement inside a canister. As a result, these cameras are lighter weight, smaller, yet still capable of sensing and recording infrared heat emanating from objects in the solar system.
Because of these attributes, scientist Tilak Hewagama, who is affiliated with the University of Maryland-College Park, and his team – which includes Aslam, Catholic University’s Nicolas Gorius, and others from Goddard, the University of Maryland, Morehead State University, the Jet Propulsion Laboratory, and York University – now want to fly ComCAM and a traditional visible-light camera on a potential CubeSat mission called the Primitive Object Volatile Explorer, or PrOVE.
Chosen by NASA’s Planetary Science Deep Space SmallSat Studies, or PSDS3, program for further study, PrOVE is different from other comet missions. 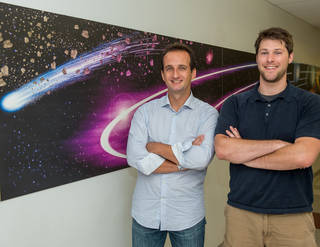 Catholic University’s Nicolas Gorius and Goddard technologist Joshua Lyzhoft are evaluating the use of a thermometer-type device to help characterize comets and potentially hazardous asteroids.
Credits: NASA/W. Hrybyk
Under this concept, the tiny craft would be parked in a stable, deep-space orbit with the potential to access a known periodic comet or a new comet that ventures into the neighborhood.
“A CubeSat deployed from a parked orbit can produce high-quality science by traveling to any comet that passes through the accessible range, rather than a dedicated mission that cannot be prepared in time to investigate a new, pristine comet that comes into view,” Hewagama said.
With the PSDS3 support, the team is identifying long-term parking orbits or “waypoints,” transfer trajectories to these waypoints, spacecraft longevity, intercept trajectories, and propulsion requirements to reach specific known comets and practical ranges for missions to new comets, among other topics.
Given the fact that PrOVE is comprised of existing commercial-off-the-shelf components, including a 6- or 12-unit CubeSat bus and the microbolometer camera, Hewagama believes the mission could be completed and launched as a secondary payload in relatively short order.
“Our study obviously will bear out important questions regarding PrOVE’s trajectory and orbit, among other technical questions, but this is a mission that could be deployed quickly. PrOVE represents an exceptional opportunity to advance the science of comets and other primitive bodies by studying them at close range. It would advance NASA science goals with data that only can be obtained with a spacecraft.”
Planetary Defense
Comet science isn’t the only potential beneficiary of a PrOVE-like microbolometer camera.
Under another research effort, Goddard technologists Josh Lyhoft and Melak Zebenay are evaluating different sensor systems needed to image and characterize an asteroid on a collision course with Earth. These sensors could provide a spacecraft with the guidance measurements needed to either deflect or destroy the object.
Like Hewagama, Lyhoft is intrigued by the possibilities offered by a microbolometer sensing system. For accurately sensing the asteroid’s location as the spacecraft approaches it, “microbolometers can perform the task,” Lyzhoft said. “We believe they’re sensitive enough for a terminal-intercept mission.”
Since Lyhoft began his investigation, NASA announced that teams developing the agency’s first asteroid-deflection mission — the Double Asteroid Redirection Test, or DART — would begin preliminary designs. Under this mission, led by scientists from the Johns Hopkins Applied Physics Laboratory, with support from Goddard and other organizations, DART would employ a kinetic impactor to conduct a test that would help demonstrate capabilities that may one day be needed to nudge an asteroid away from its path to Earth. A test with a small, non-threatening asteroid — the smaller of two asteroids making up the Didymos system — is planned for 2024.
“NASA will almost certainly be flying other asteroid-intercept missions for science, planetary defense, or both,” said Goddard scientist Brent Barbee, who is working with Lyhoft. “So, it’s very conceivable that Josh’s work will benefit future NASA asteroid missions, and that is certainly the intent of his work.”
For more Goddard technology news, go to: https://www.nasa.gov/sites/default/files/atoms/files/fall_2017_final_lowrez.pdf
By Lori KeeseyNASA’s Goddard Space Flight Center
Editor: Lynn Jenner
Publicado por salud equitativa en 8:35