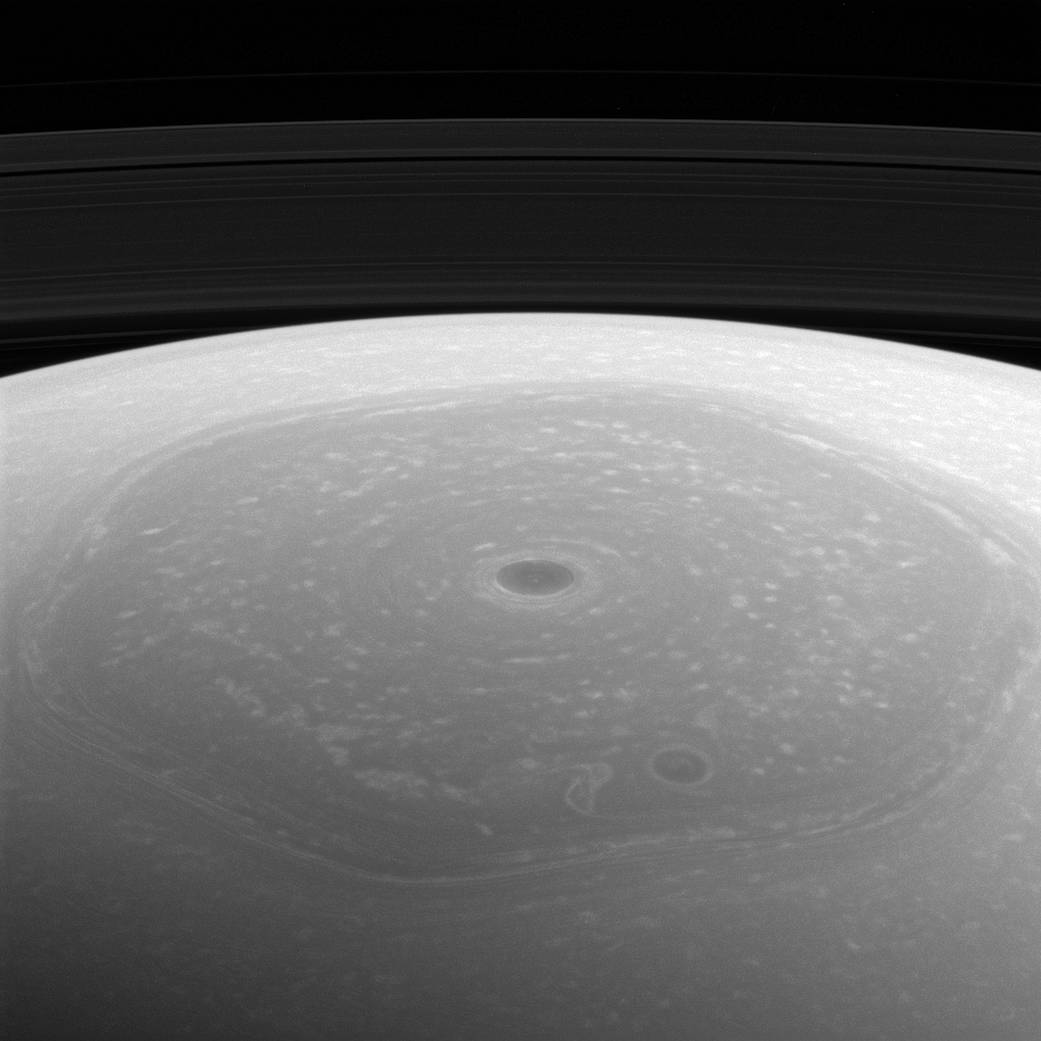 Reflected sunlight is the source of the illumination for visible wavelength images such as the one above.  However, at longer infrared wavelengths, direct thermal emission from objects dominates over reflected sunlight.  This enabled instruments that can detect infrared radiation to observe the pole even in the dark days of winter when Cassini first arrived at Saturn and Saturn's northern hemisphere was shrouded in shadow.
Now, 13 years later, the north pole basks in full sunlight. Close to the northern summer solstice, sunlight illuminates the previously dark region, permitting Cassini scientists to study this area with the spacecraft’s full suite of imagers.
This view looks toward the northern hemisphere from about 34 degrees above Saturn’s ringplane. The image was taken with the Cassini spacecraft wide-angle camera on April 25, 2017 using a spectral filter which preferentially admits wavelengths of near-infrared light centered at 752 nanometers.
The view was acquired at a distance of approximately 274,000 miles (441,000 kilometers) from Saturn and at a Sun-Saturn-spacecraft, or phase, angle of 111 degrees. Image scale is 16 miles (26 kilometers) per pixel.
The Cassini spacecraft ended its mission on Sept. 15, 2017.
The Cassini mission is a cooperative project of NASA, ESA (the European Space Agency) and the Italian Space Agency. The Jet Propulsion Laboratory, a division of the California Institute of Technology in Pasadena, manages the mission for NASA's Science Mission Directorate, Washington. The Cassini orbiter and its two onboard cameras were designed, developed and assembled at JPL. The imaging operations center is based at the Space Science Institute in Boulder, Colorado.
For more information about the Cassini-Huygens mission visit https://saturn.jpl.nasa.gov and https://www.nasa.gov/cassini. The Cassini imaging team homepage is at http://ciclops.org.
Credit: NASA/JPL-Caltech/Space Science Institute
Editor: Tony Greicius
Publicado por salud equitativa en 8:34