Study Samples of the 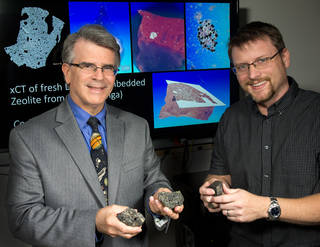 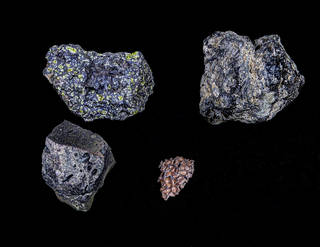 A NASA team scanned these terrestrial rock samples, all measuring two to four inches in diameter, to investigate possibilities for future in-space use of non-destructive evaluation techniques. The two rock samples on the bottom are from Earth’s newest volcanic island in the Kingdom of Tonga; the sample on the upper left from kilometers deep contains large green olivine crystals and came from Oahu in Hawaii. The sample on the upper right is a 3.7-million-year old impact melt breccia from the Elgygytgyn impact crater in Siberia.
Credits: NASA/W. Hrybyk
A diagnostic tool, similar in theory to those used by the medical profession to non-invasively image internal organs, bones, soft tissue, and blood vessels, could be equally effective at “triaging” extraterrestrial rocks and other samples before they are shipped to Earth for further analysis.
In an effort designed to find creative uses of technology for future robotic and human missions to the Moon, Mars, and asteroids, NASA engineer Justin Jones used an industrial X-ray Computed Tomography, or CT, scanner at NASA’s Goddard Space Flight Center in Greenbelt, Maryland, to evaluate volcanic rocks from a newly formed island in the South Pacific and other specimens ensconced inside thick glass and metal enclosures.
“Imagine taking something this big and scaling it down to breadbox size, then readying the equipment to be spaceflight worthy,” Jones said, referring to the scanner that occupies a small room inside Goddard’s Non-Destructive Evaluation, or NDE, Laboratory. “Such instruments could be tested on the International Space Station and then transitioned to a future deep space gateway where crew members could analyze new samples from the Moon or asteroids or even Mars before shipping them back to Earth for further analysis.”
“We’re thrilled with our results,” continued Jones, who carried out his technology-demonstration project with support from Goddard’s Fellows Innovation Challenge, a research and development program designed to advance high-reward technologies and investigations in new, cross-disciplinary ways. “The demonstrations provided a few new insights into the 3-D structure of the samples we tested and underscored the value of potentially creating a CT capability specifically for use in space, especially for triage purposes.”
Jones, who helped his management acquire the CT scanner six years ago, doesn’t normally spend his days examining rocks. “When something fails, when a part fails, engineers want us to diagnose what happened, and we will use a suite of tools like those in the medical industry to help pinpoint the defect,” he said.
The beauty of an X-ray CT scanner, which operates like a medical CAT scanner, is that it allows high-resolution, 3-D views inside materials that otherwise would need difficult, often-times destructive sample preparation, including cutting and use of chemicals, just to analyze the sample’s composition. With Goddard’s CT system, which is non-destructive, users can see details as small as a couple microns in size, which is several times smaller than a human hair.
“Our technology-driven investigation gave us a broader understanding of what our CT system can do,” Jones said.
Hunga Tonga Hunga Ha’apai Volcanic Island Evaluated
With the scanner, Jones and his team from Goddard’s Materials Branch, including Ryan Kent and Olivia Landgrover, evaluated samples from a newly formed volcanic island, Hunga Tonga-Hunga Ha’apai, in the Kingdom of Tonga in the southwest Pacific Ocean. This new island formed in January of 2015 after the volcano’s explosive eruption — a potential analogue to some volcanic activity on Mars, said Goddard Chief Scientist James Garvin, who, along with his university partners, are using advanced remote-sensing methods to explore the island in a pilot study for NASA’s Earth Sciences Division.
“CT techniques are permitting rapid assessment for understanding the potential lifetime of the fragile new volcanic landscapes in the region,” Garvin said. “Already, Justin and his team have identified the possibility of minerals known as zeolites,” minerals commonly used in adsorbents that purify water, among other applications, and catalysts that speed up chemical reactions. “These findings have a direct bearing on how similar processes could have operated on Mars,” Garvin said.
Space-Relevant Rocks Studied
The technology-demonstration project didn’t end there. Garvin, who is interested in researching and advancing new technological approaches for studying extraterrestrial rocks and minerals, asked the team to evaluate rocks produced in large impact cratering events here on Earth, as well as meteorites.
Even with samples encased in protective glass and metal cases filled with nitrogen, Goddard’s CT scanner revealed previously undetected minerals and 3-D arrangements,” Garvin said.
“The future of in-situ and sample-based planetary exploration will revolve around new measurement techniques that reveal details at new scales and in ways that do not destroy the samples or contaminate them,” Garvin continued. “Based on Justin’s work, I believe that someday, astronauts on Mars or the Moon will be able to use off-planet CT laboratory techniques to do the reconnaissance of extraordinary materials on other worlds just as we do in the labs here on Earth today.”
For more Goddard technology news, go to: https://www.nasa.gov/sites/default/files/atoms/files/fall_2017_final_lowrez.pdf
By Lori KeeseyNASA’s Goddard Space Flight Center
Editor: Lynn Jenner
Publicado por salud equitativa en 8:37