More than halfway across the universe, an enormous blue star nicknamed Icarus is the farthest individual star ever seen. Normally, it would be much too faint to view, even with the world’s largest telescopes. But through a quirk of nature that tremendously amplifies the star’s feeble glow, astronomers using NASA’s Hubble Space Telescope were able to pinpoint this faraway star and set a new distance record. They also used Icarus to test one theory of dark matter, and to probe the make-up of a foreground galaxy cluster.
The star, harbored in a very distant spiral galaxy, is so far away that its light has taken 9 billion years to reach Earth. It appears to us as it did when the universe was about 30 percent of its current age. 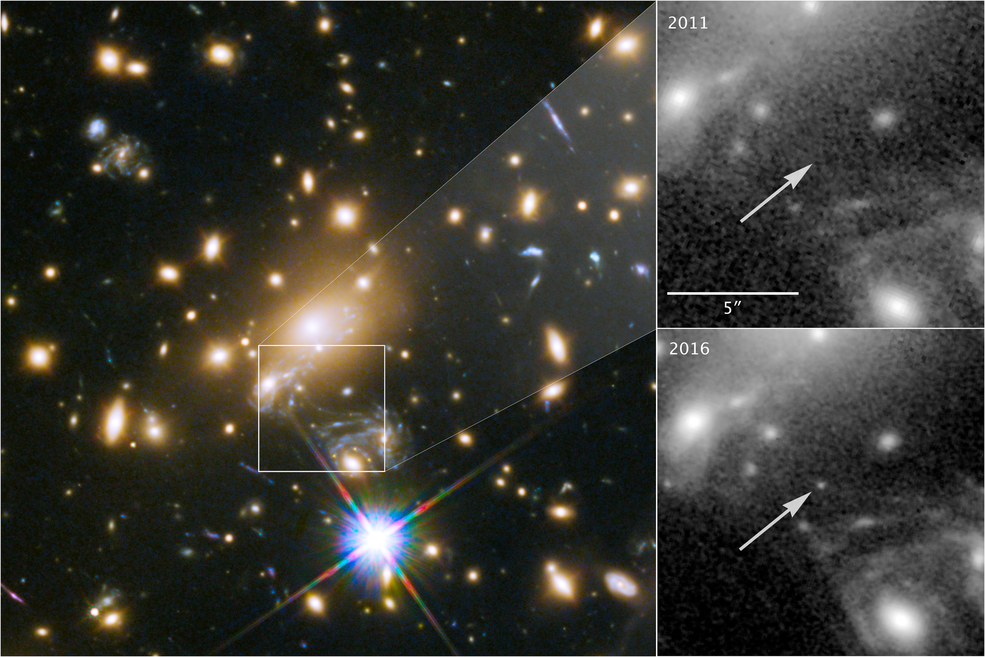 Icarus, whose official name is MACS J1149+2223 Lensed Star 1, is the farthest individual star ever seen. It is only visible because it is being magnified by the gravity of a massive galaxy cluster, located about 5 billion light-years from Earth. Called MACS J1149+2223, this cluster, shown at left, sits between Earth and the galaxy that contains the distant star. The panels at the right show the view in 2011, without Icarus visible, compared with the star's brightening in 2016.
Credits: NASA, ESA, and P. Kelly (University of Minnesota)
The discovery of Icarus through gravitational lensing has initiated a new way for astronomers to study individual stars in distant galaxies. These observations provide a rare, detailed look at how stars evolve, especially the most luminous stars.
“This is the first time we’re seeing a magnified, individual star,” explained former University of California at Berkeley postdoc and study leader Patrick Kelly now of the University of Minnesota, Twin Cities. “You can see individual galaxies out there, but this star is at least 100 times farther away than the next individual star we can study, except for supernova explosions.”
Gravity as a Natural Cosmic Lens 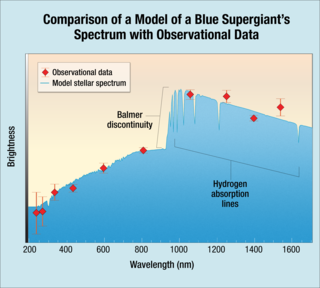 Scientists found that the Hubble data from MACS J1149+2223 Lensed Star 1 (Icarus) matches the model for a blue supergiant. The agreement shows a remarkably good fit, and indicates that Icarus is approximately twice as hot as the Sun. The solid blue line shows the model spectrum of the blue supergiant, adjusted for the distance to the host galaxy of the highly magnified star. The red diamonds are the actual data measured for Icarus. The observed wavelength of the Balmer discontinuity relative to its intrinsic wavelength (at about 365 nm) is an indicator of the distance to the star. The strength of the Balmer discontinuity depends on the strength of the star's gravity at its surface and its temperature.
Credits: NASA, ESA, and A. Feild (STScI)
The cosmic quirk that makes this star visible is a phenomenon called “gravitational lensing.” Gravity from a foreground, massive cluster of galaxies acts as a natural lens in space, bending and amplifying light. Sometimes light from a single background object appears as multiple images. The light can be highly magnified, making extremely faint and distant objects bright enough to see.
In the case of Icarus, a natural “magnifying glass” is created by a galaxy cluster called MACS J1149+2223. Located about 5 billion light-years from Earth, this massive cluster of galaxies sits between the Earth and the galaxy that contains the distant star. By combining the strength of this gravitational lens with Hubble’s exquisite resolution and sensitivity, astronomers can see and study Icarus.
The team — including Jose Diego of the Instituto de Física de Cantabria, Spain, and Steven Rodney of the University of South Carolina, Columbia — dubbed the star “Icarus,“ after the Greek mythological character who flew too near the Sun on wings of feathers and wax that melted. (Its official name is MACS J1149+2223 Lensed Star 1.) Much like Icarus, the background star had only fleeting glory as seen from Earth: It momentarily skyrocketed to 2,000 times its true brightness when temporarily magnified.
Models suggest that the tremendous brightening was probably from the gravitational amplification of a star, similar in mass to the Sun, in the foreground galaxy cluster when the star moved in front of Icarus. The star’s light is usually magnified by about 600 times due to the foreground cluster’s mass.
Characterizing Icarus
The team had been using Hubble to monitor a supernova in the far-distant spiral galaxy when, in 2016, they spotted a new point of light not far from the magnified supernova. From the position of the new source, they inferred that it should be much more highly magnified than the supernova.
When they analyzed the colors of the light coming from this object, they discovered it was a blue supergiant star. This type of star is much larger, more massive, hotter, and possibly hundreds of thousands of times intrinsically brighter than our Sun. But at this distance, it would still be too far away to see without the amplification of gravitational lensing, even for Hubble.
How did Kelly and his team know Icarus was not another supernova? “The source isn’t getting hotter; it’s not exploding. The light is just being magnified,” said Kelly. “And that’s what you expect from gravitational lensing.”
Looking for Dark Matter
Detecting the amplification of a single, pinpoint background star provided a unique opportunity to test the nature of dark matter in the cluster. Dark matter is an invisible material that makes up most of the universe’s mass.
By probing what’s floating around in the foreground cluster, scientists were able to test one theory that dark matter might be made up mostly of a huge number of primordial black holes formed in the birth of the universe with masses tens of times larger than the Sun. The results of this unique test disfavor that hypothesis, because light fluctuations from the background star, monitored with Hubble for 13 years, would have looked different if there were a swarm of intervening black holes.
When NASA's James Webb Space Telescope is launched, astronomers expect to find many more stars like Icarus. Webb's extraordinary sensitivity will allow measurement of even more details, including whether these distant stars are rotating. Such magnified stars may even be found to be fairly common.
The Hubble Space Telescope is a project of international cooperation between NASA and ESA (European Space Agency). NASA’s Goddard Space Flight Center in Greenbelt, Maryland, manages the telescope. The Space Telescope Science Institute (STScI) in Baltimore, Maryland, conducts Hubble science operations. STScI is operated for NASA by the Association of Universities for Research in Astronomy, in Washington, D.C.
NASA's Hubble Portal: www.nasa.gov/hubble
The science paper by J. Diego et al.: http://imgsrc.hubblesite.org/hvi/uploads/science_paper/file_attachment/319/dm-microscope_Feb22resubmitted.pdf
The science paper by S. Rodney et al.: http://imgsrc.hubblesite.org/hvi/uploads/science_paper/file_attachment/318/Rodney_accepted_Nature_Astronomy.pdf
The science paper by P. Kelly et al.: http://imgsrc.hubblesite.org/hvi/uploads/science_paper/file_attachment/310/nature_astro_v3.pdf
The science paper by P. Kelly et al. (Nature Astronomy): http://dx.doi.org/10.1038/s41550-018-0430-3
The science paper by S. Rodney et al. (Nature Astronomy): http://dx.doi.org/10.1038/s41550-018-0405-4
Hubble-Europe's Release: http://www.spacetelescope.org/news/heic1807
Ann Jenkins / Ray VillardSpace Telescope Science Institute, Baltimore, Maryland410-338-4488 / 410-338-4514jenkins@stsci.edu / villard@stsci.edu
Patrick KellyUniversity of Minnesota-Twin Cities, Minneapolis, Minnesota510-859-8370plkelly@umn.edu
Editor: Karl Hille
Publicado por salud equitativa en 10:49