This colorful image, taken by NASA’s Hubble Space Telescope, celebrates the Earth-orbiting observatory’s 28th anniversary of viewing the heavens, giving us a window seat to the universe’s extraordinary tapestry of stellar birth and destruction.
At the center of the photo, a monster young star 200,000 times brighter than our Sun is blasting powerful ultraviolet radiation and hurricane-like stellar winds, carving out a fantasy landscape of ridges, cavities, and mountains of gas and dust. 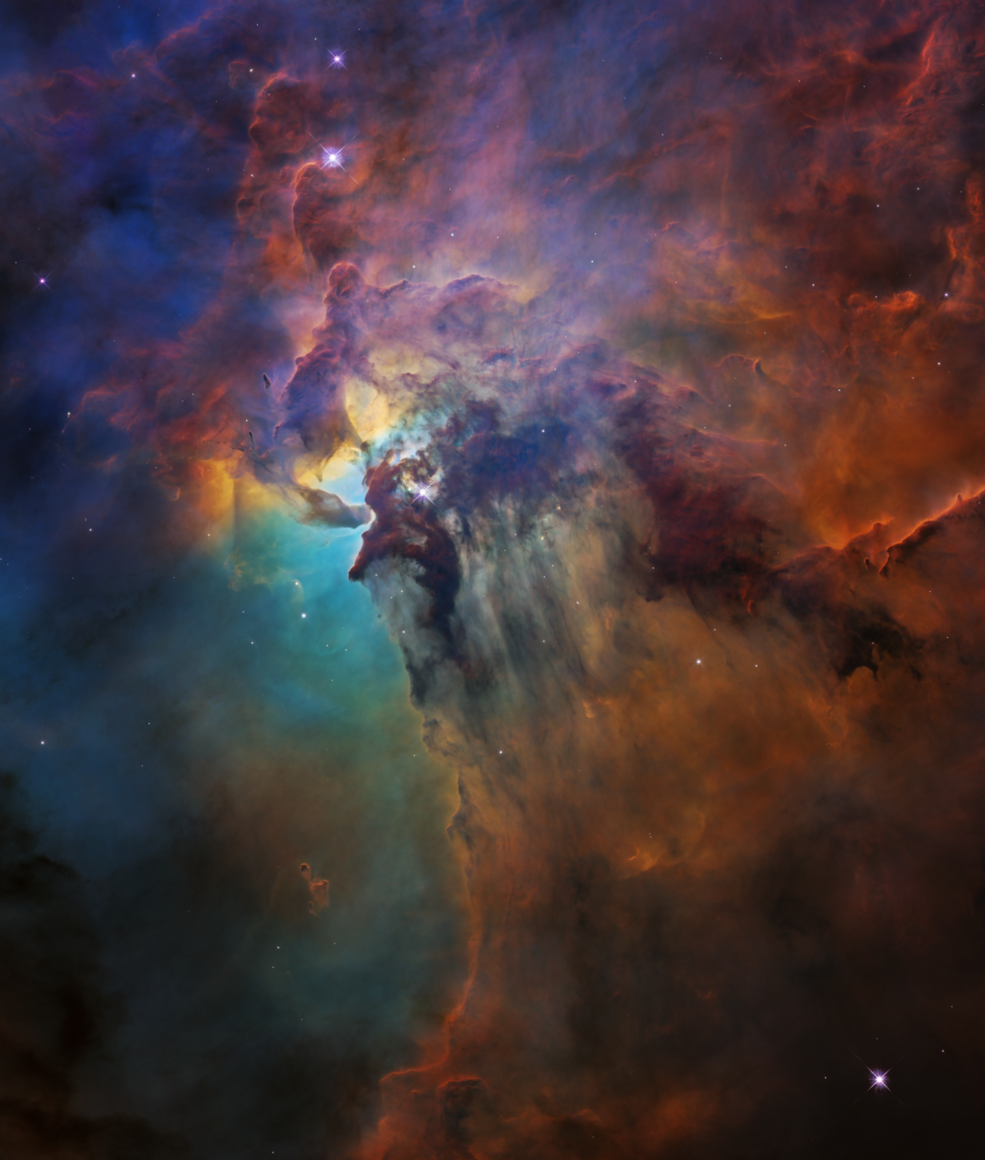 This colorful image, taken by NASA’s Hubble Space Telescope, celebrates the Earth-orbiting observatory’s 28th anniversary of viewing the heavens, giving us a window seat to the universe’s extraordinary tapestry of stellar birth and destruction.
Credits: NASA, ESA, and STScI
This mayhem is all happening at the heart of the Lagoon Nebula, a vast stellar nursery located 4,000 light-years away and visible in binoculars simply as a smudge of light with a bright core.
The giant star, called Herschel 36, is bursting out of its natal cocoon of material, unleashing blistering radiation and torrential stellar winds (streams of subatomic particles) that push dust away in curtain-like sheets. This action resembles the Sun bursting through the clouds at the end of an afternoon thunderstorm that showers sheets of rainfall.
Herschel 36’s violent activity has blasted holes in the bubble-shaped cloud, allowing astronomers to study this action-packed stellar breeding ground.
The hefty star is 32 times more massive than our Sun, and 40,000 degrees Kelvin. It is nearly nine times our Sun’s diameter. Herschel 36 is still very active because it is young by a star’s standards, only 1 million years old. Based on its mass, it will live for another 5 million years. In comparison, our smaller Sun is 5 billion years old and will live another 5 billion years.
This region epitomizes a typical, raucous stellar nursery full of birth and destruction. The clouds may look majestic and peaceful, but they are in a constant state of flux from the star’s torrent of searing radiation and high-speed particles from stellar winds. As the monster star throws off its natal cocoon of material with its powerful energy, it is suppressing star formation around it.
However, at the dark edges of this dynamic bubble-shaped ecosystem, stars are forming within dense clouds of gas and dust. Dark, elephant-like “trunks” of material represent dense pieces of the cocoon that are resistant to erosion by the searing ultraviolet light and serve as incubators for fledgling stars. They are analogous to desert buttes that resist weather erosion.
The Hubble view shows off the bubble’s 3D structure. Dust pushed away from the star reveals the glowing oxygen gas (in blue) behind the blown-out cavity. Herschel 36’s brilliant light is illuminating the top of the cavity (in yellow). The reddish hue that dominates part of the region is glowing nitrogen. The dark purple areas represent a mixture of hydrogen, oxygen, and nitrogen.
The image shows a region of the nebula measuring about 4 light-years across.
The observations were taken by Hubble’s Wide Field Camera 3 between Feb. 12 and Feb. 18, 2018.
The Hubble Space Telescope is a project of international cooperation between NASA and ESA (European Space Agency). NASA's Goddard Space Flight Center in Greenbelt, Maryland, manages the telescope. The Space Telescope Science Institute (STScI) in Baltimore conducts Hubble science operations. STScI is operated for NASA by the Association of Universities for Research in Astronomy, Inc., in Washington, D.C.
For additional images and videos, visit: http://hubblesite.org/news_release/news/2018-21
For NASA's Hubble website: www.nasa.gov/hubble
For Hubble Europe's release: www.spacetelescope.org/
For the 1996 Hubble Lagoon Nebula Release: http://hubblesite.org/images/news/release/1996-38
Donna Weaver / Ray VillardSpace Telescope Science Institute, Baltimore, Maryland410-338-4493 / 410-338-4514dweaver@stsci.edu / villard@stsci.edu
Editor: Karl Hille
Publicado por salud equitativa en 7:37