These NASA Hubble Space Telescope images compare two diverse views of the roiling heart of a vast stellar nursery, known as the Lagoon Nebula. The images, one taken in visible and the other in infrared light, celebrate Hubble’s 28th anniversary in space.
The colorful visible-light image at left reveals a fantasy landscape of ridges, cavities, and mountains of gas and dust. This dust-and-gas landscape is being sculpted by powerful ultraviolet radiation and hurricane-like stellar winds unleashed by a monster young star. Located at the center of the photo, the star, known as Herschel 36, is about 200,000 times brighter than our Sun. This hefty star is 32 times more massive than our Sun and 40,000 degrees Kelvin. Herschel 36 is still very active because it is young by a star’s standards, only 1 million years old. 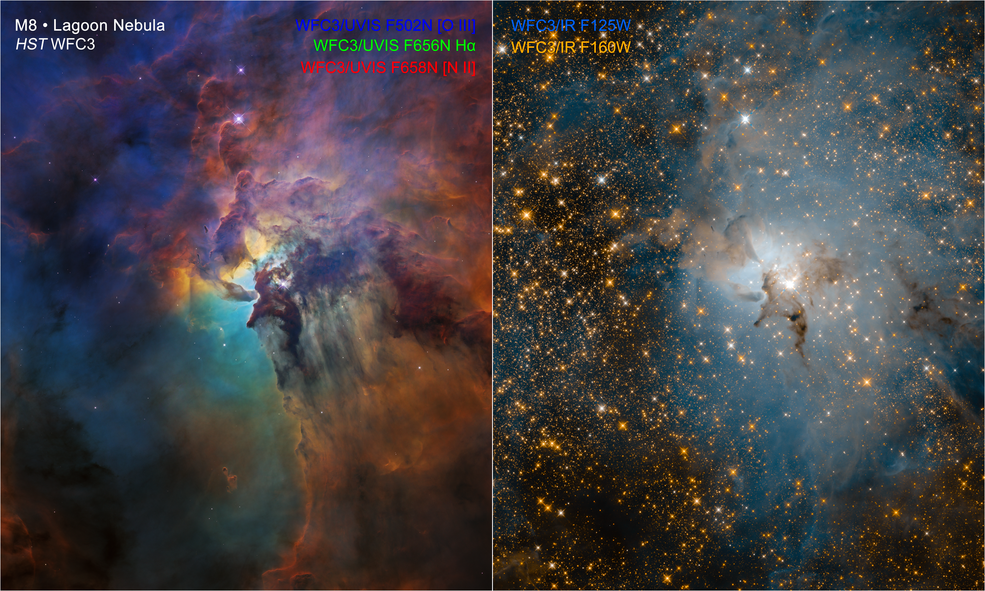 These NASA Hubble Space Telescope images compare two diverse views of the roiling heart of a vast stellar nursery, known as the Lagoon Nebula. The images, one taken in visible and the other in infrared light, celebrate Hubble’s 28th anniversary in space.
Credits: NASA, ESA, and STScI

A monster young star 200,000 times brighter than our Sun is blasting powerful ultraviolet radiation and hurricane-like stellar winds, carving out a fantasy landscape of ridges, cavities, and mountains of gas and dust.
View the image

The blistering radiation and powerful stellar winds (streams of subatomic particles) are pushing dust away in curtain-like sheets. As the monster star throws off its natal cocoon of material, it is suppressing star formation around it.
However, at the dark edges of this dynamic bubble-shaped ecosystem, stars are forming within dense clouds of gas and dust. Dark, elephant-like “trunks” of material represent dense pieces of the cocoon that are resistant to erosion by the searing ultraviolet light and serve as incubators for fledgling stars.
The star-filled image at right, taken by Hubble in near-infrared light, reveals a very different view of the Lagoon Nebula compared to its visible-light portrait. Making infrared observations of the cosmos allows astronomers to penetrate vast clouds of gas and dust to uncover hidden gems. Hubble’s view offers a sneak peek at the dramatic vistas NASA’s James Webb Space Telescope will provide.
This video zooms into the core of a rich star-birth region called the Lagoon Nebula, located in the constellation Sagittarius in the direction of our Milky Way galaxy’s central bulge.
Credits: NASA, ESA, and G. Bacon, D. Player, J. DePasquale, F. Summers, and Z. Levay (STScI) Acknowledgement: Fujii, Digitized Sky Survey, ESO/VPHAS, and Crisp
The most obvious difference between Hubble’s infrared and visible photos of this region is the abundance of stars that fill the infrared field of view. Most of them are more distant, background stars located behind the nebula itself. However, some of these pinpricks of light are young stars within the Lagoon Nebula. The giant star Herschel 36, near the center of the frame, shines even brighter in this infrared view.
Dark smudges known as Bok globules mark the thickest parts of the nebula, where dust protects still-forming stars and their planets. While Hubble cannot penetrate these dusty clumps, Webb will be able to see through them.
VIDEO
The Lagoon Nebula resides 4,000 light-years away. The image shows a region of the nebula measuring about 4 light-years across.
The observations were taken by Hubble’s Wide Field Camera 3 between Feb. 12 and Feb. 18, 2018.
For additional images and videos, visit: http://hubblesite.org/news_release/news/2018-21
For NASA's Hubble website: www.nasa.gov/hubble
For Hubble Europe's release: www.spacetelescope.org/
For the 1996 Hubble Lagoon Nebula Release: http://hubblesite.org/images/news/release/1996-38
Donna Weaver / Ray VillardSpace Telescope Science Institute, Baltimore, Maryland410-338-4493 / 410-338-4514dweaver@stsci.edu / villard@stsci.edu
Editor: Karl Hille
Publicado por salud equitativa en 7:41