Are Outgrowing Their Galaxies 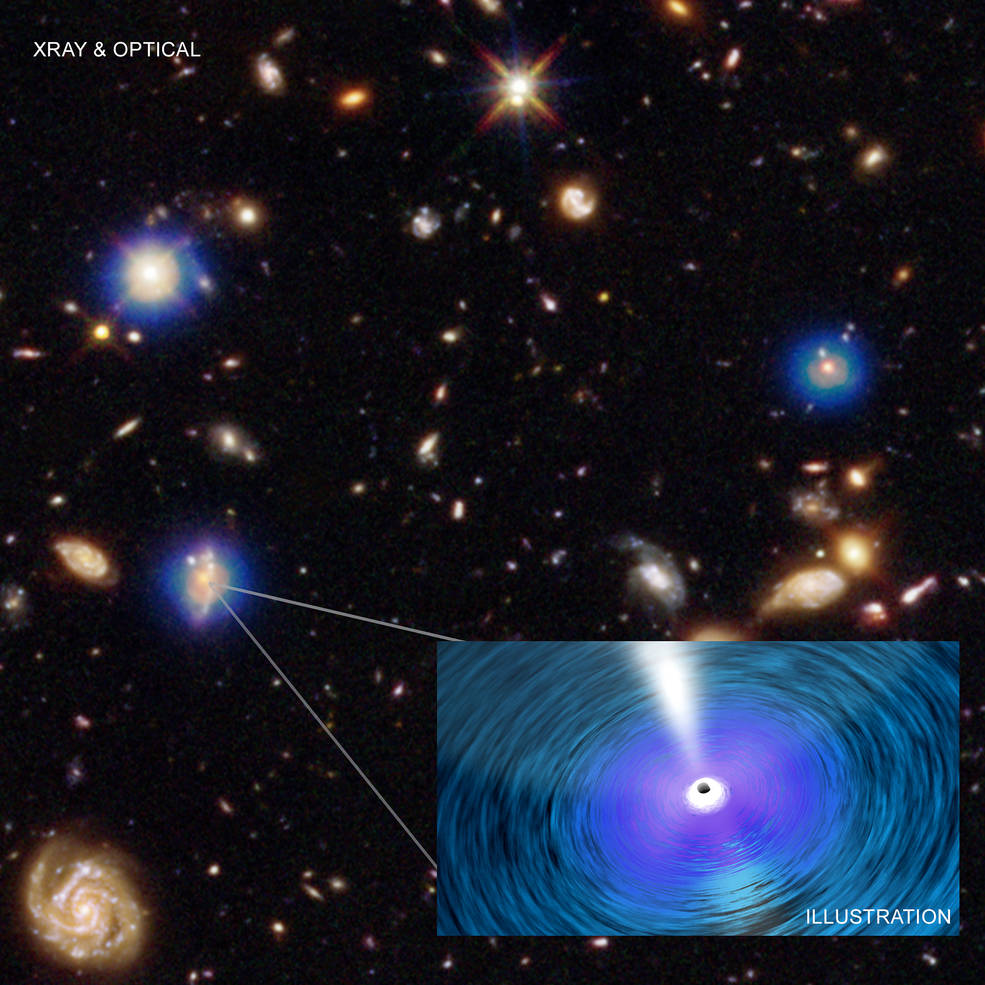 In this graphic an image from the Chandra Deep Field-South is shown. The Chandra image (blue) is the deepest ever obtained in X-rays. It has been combined with an optical and infrared image from the Hubble Space Telescope (HST), colored red, green, and blue. Each Chandra source is produced by hot gas falling towards a supermassive black hole in the center of the host galaxy, as depicted in the artist’s illustration.
Credits: NASA/CXC/Penn. State/G. Yang et al and NASA/CXC/ICE/M. Mezcua et al.; Optical: NASA/STScI; Illustration: NASA/CXC/A. Jubett
Read full caption
The biggest black holes in the Universe are growing faster than the rate of stars being formed in their galaxies, according to two new studies using data from NASA’s Chandra X-ray Observatory and other telescopes.
Over many years, astronomers have gathered data on the formation of stars in galaxies and the growth of supermassive black holes (that is, those with millions or billions the mass of the Sun) in their centers. These data suggested that the black holes and the stars in their host galaxies grow in tandem with each other.
Now, findings from two independent groups of researchers indicate that the black holes in massive galaxies have grown much faster than in the less massive ones.
“We are trying to reconstruct a race that started billions of years ago,” said Guang Yang of Penn State who led one of the two studies. “We are using extraordinary data taken from different telescopes to figure out how this cosmic competition unfolded.”
Using large amounts of data from NASA's Chandra X-ray Observatory, the Hubble Space Telescope and other observatories, Yang and his colleagues studied the growth rate of black holes in galaxies at distances of 4.3 to 12.2 billion light years from Earth. The X-ray data included the Chandra Deep Field-South & North and the COSMOS-Legacy surveys.
The scientists calculated the ratio between a supermassive black hole's growth rate and the growth rate of stars in its host galaxy. A common idea is that this ratio is approximately constant for all galaxies.
Instead, Yang and colleagues found that this ratio is much higher for more massive galaxies. For galaxies containing about 100 billion solar masses worth of stars, the ratio is about ten times higher than it is for galaxies containing about 10 billion solar masses worth of stars.
“An obvious question is why?” said co-author Niel Brandt, also of Penn State. “Maybe massive galaxies are more effective at feeding cold gas to their central supermassive black holes than less massive ones.”
Another group of scientists independently found evidence that the most massive black holes’ growth has outstripped that of stars in their host galaxies. Mar Mezcua, of the Institut of Space Sciences in Spain, and her colleagues studied black holes in some of the brightest and most massive galaxies in the Universe. They studied 72 galaxies located at the center of galaxy clusters at distances ranging up to about 3.5 billion light years from Earth. The study used X-ray data from Chandra and radio data from the Australia Telescope Compact Array, the Karl G. Jansky Very Large Array and Very Long Baseline Array.
Mezcua and her colleagues estimated the masses of black holes in these galaxy clusters by using a well-known relationship that connects the mass of a black hole to the X-ray and radio emission associated with the black hole. The black hole masses were found to be about ten times larger than masses estimated by another method using the assumption that the black holes and galaxies grew in tandem.
“We found black holes that are far bigger than we expected,” said Mezcua. “Maybe they got a head start in this race to grow, or maybe they’ve had an edge in speed of growth that’s lasted billions of years.”
The researchers found that almost half of the black holes in their sample had masses estimated to be at least 10 billion times the mass of the Sun. This places them in an extreme weight category that some astronomers call “ultramassive” black holes.
"We know that black holes are extreme objects,” said co-author J. Hlavacek-Larrondo of the University of Montreal, “so it may not come as a surprise that the most extreme examples of them would break the rules we thought they should follow."
The work by Mezcua et al. was published in the February 2018 issue of Monthly Notices of the Royal Astronomical Society (MNRAS) and is available online (https://arxiv.org/abs/1710.10268). The paper by Yang et al. has been accepted and will appear in the April 2018 issue of the MNRAS (available online: https://arxiv.org/abs/1710.09399).
NASA's Marshall Space Flight Center in Huntsville, Alabama, manages the Chandra program for NASA's Science Mission Directorate in Washington. The Smithsonian Astrophysical Observatory in Cambridge, Massachusetts, controls Chandra's science and flight operations.
Read More from NASA's Chandra X-ray Observatory.
For more Chandra images, multimedia and related materials, visit:
http://www.nasa.gov/chandra
Molly PorterNASA Marshall Space Flight Center, Huntsville, Ala.256-424-5158molly.a.porter@nasa.gov
Megan WatzkeChandra X-ray Center, Cambridge, Mass.617-496-7998mwatzke@cfa.harvard.edu
Editor: Lee Mohon
Publicado por salud equitativa en 11:46