in the Milky Way Center 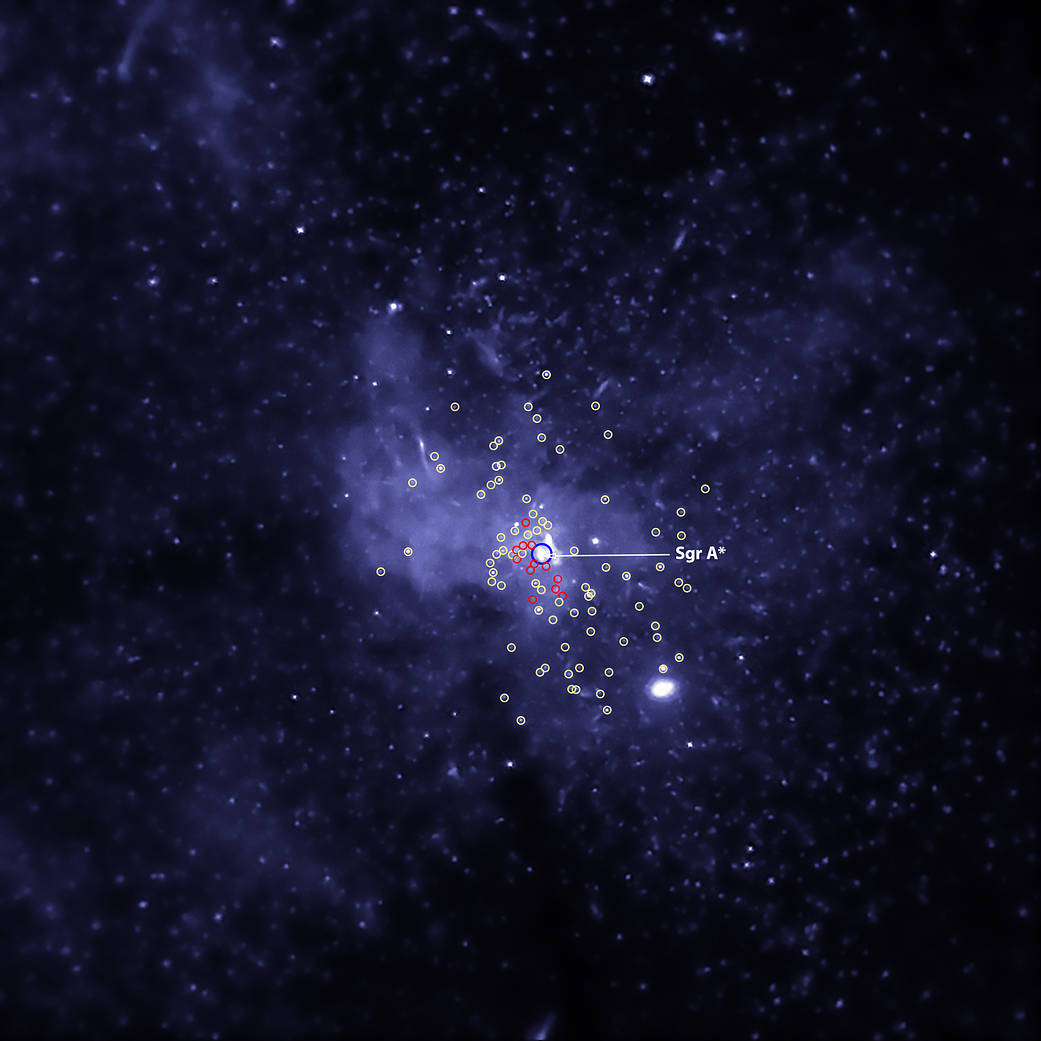 Back to Gallery
Astronomers have discovered evidence for thousands of black holes located near the center of our Milky Way galaxy using data from NASA’s Chandra X-ray Observatory.
This black hole bounty consists of stellar-mass black holes, which typically weigh between five to 30 times the mass of the Sun. These newly identified black holes were found within three light years – a relatively short distance on cosmic scales – of the supermassive black hole at our Galaxy’s center known as Sagittarius A* (Sgr A*).
Theoretical studies of the dynamics of stars in galaxies have indicated that a large population of stellar mass black holes – as many as 20,000 – could drift inward over the eons and collect around Sgr A*. This recent analysis using Chandra data is the first observational evidence for such a black hole bounty.
A black hole by itself is invisible. However, a black hole – or neutron star – locked in close orbit with a star will pull gas from its companion (astronomers call these systems “X-ray binaries”). This material falls into a disk and heats up to millions of degrees and produces X-rays before disappearing into the black hole. Some of these X-ray binaries appear as point-like sources in the Chandra image.
A team of researchers, led by Chuck Hailey of Columbia University in New York, used Chandra data to search for X-ray binaries containing black holes that are located near Sgr A*. They studied the X-ray spectra – that is the amount of X-rays seen at different energies – of sources within about 12 light years of Sgr A*.
The team then selected sources with X-ray spectra similar to those of known X-ray binaries, which have relatively large amounts of low energy X-rays. Using this method they detected fourteen X-ray binaries within about three light years of Sgr A*. Two X-ray sources likely to contain neutron stars based on the detection of characteristic outbursts in previous studies were then eliminated from the analysis.
The dozen remaining X-ray binaries are identified in the labeled version of the image using red colored circles. Other sources with relatively large amounts of high energy X-rays are labeled in yellow, and are mostly binaries containing white dwarf stars.
Hailey and his collaborators concluded that a majority of these dozen X-ray binaries are likely to contain black holes. The amount of variability they have shown over timescales of years is different from that expected for X-ray binaries containing neutron stars.
Only the brightest X-ray binaries containing black holes are likely to be detectable at the distance of Sgr A*. Therefore, the detections in this study imply that a much larger population of fainter, undetected X-ray binaries – at least 300 and up to a thousand – containing stellar-mass black holes should be present around Sgr A*.
This population of black holes with companion stars near Sgr A* could provide insight into the formation of X-ray binaries from close encounters between stars and black holes. This discovery could also inform future gravitational wave research. Knowing the number of black holes in the center of a typical galaxy can help in better predicting how many gravitational wave events may be associated with them.
An even larger population of stellar-mass black holes without companion stars should be present near Sgr A*. According to theoretical follow-up work by Aleksey Generozov of Columbia and his colleagues, more than about 10,000 black holes and as many as 40,000 black holes should exist in the center of the Galaxy.
While the authors strongly favor the black hole explanation, they cannot rule out the possibility that up to about half of the observed dozen sources are from a population of millisecond pulsars, i.e., very rapidly rotating neutron stars with strong magnetic fields.
A paper describing these results appeared in the April 5th issue of the journal Nature. NASA's Marshall Space Flight Center in Huntsville, Alabama, manages the Chandra program for NASA's Science Mission Directorate in Washington. The Smithsonian Astrophysical Observatory in Cambridge, Massachusetts, controls Chandra's science and flight operations.
Image credit: NASA/CXC/Columbia Univ./C. Hailey et al.
Read More from NASA's Chandra X-ray Observatory.
For more Chandra images, multimedia and related materials, visit:
http://www.nasa.gov/chandra
Editor: Lee Mohon
Publicado por salud equitativa en 11:46