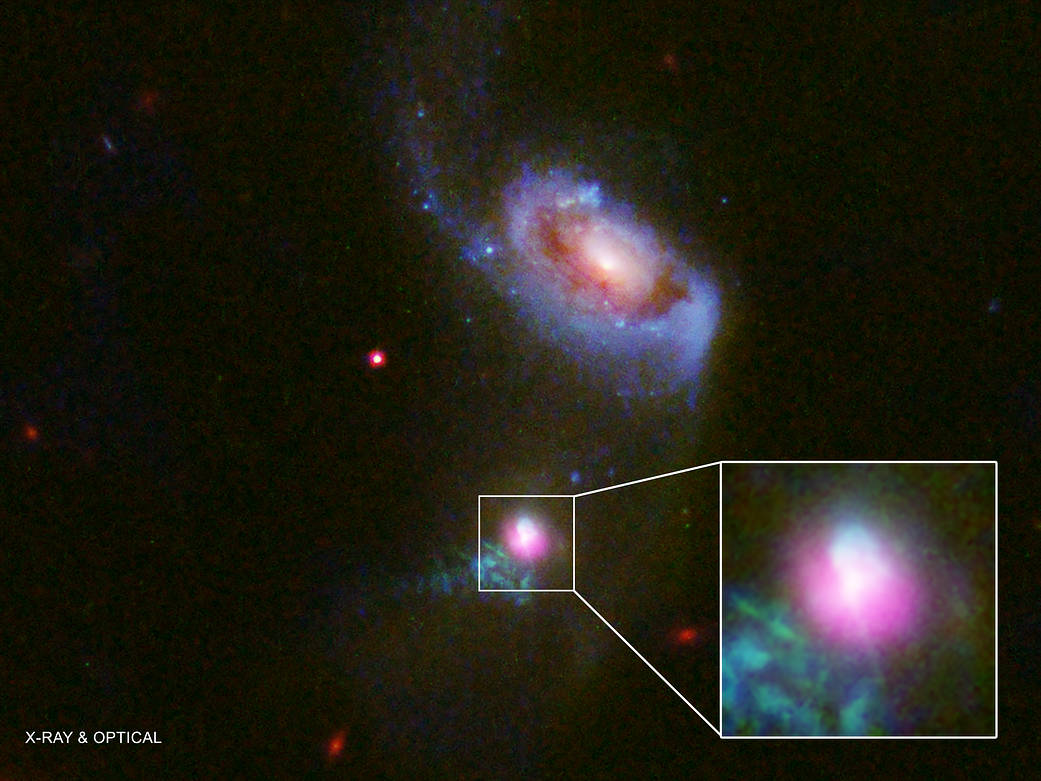 Back to Gallery
Using data from several telescopes including NASA's Chandra X-ray Observatory, astronomers have caught a supermassive black hole snacking on gas and then "burping" — not once but twice, as described in our latest press release.
This graphic shows the galaxy, called SDSS J1354+1327 (J1354 for short) in a composite image with data from Chandra (purple), and the Hubble Space Telescope (HST; red, green and blue). The inset box contains a close-up view of the central region around J1354's supermassive black hole. A companion galaxy to J1354 is shown to the north. Researchers also used data from the W.M. Keck Observatory atop Mauna Kea, Hawaii and the Apache Point Observatory (APO) in New Mexico for this finding.
Chandra detected a bright, point-like source of X-ray emission from J1354, a telltale sign of the presence of a supermassive black hole millions or billions of times more massive than our sun. The X-rays are produced by gas heated to millions of degrees by the enormous gravitational and magnetic forces near the black hole. Some of this gas will fall into the black hole, while a portion will be expelled in a powerful outflow of high-energy particles.
By comparing images from Chandra and HST, the team determined that the black hole is located in the center of the galaxy, the expected location for such an object. The X-ray data also provide evidence that the supermassive black hole is embedded in a heavy veil of dust and gas.
The two-course meal for the black hole comes from a companion galaxy that collided with J1354 in the past. This collision produced a stream of stars and gas that links J1354 and the other galaxy. The separate outbursts from the black hole are caused by different clumps from this stream being consumed by the supermassive black hole. The researchers determined these two "burps" happened about 100,000 years apart.
The team used optical data from HST, Keck and APO to show that electrons had been stripped from atoms in a cone of gas (the green emission in the lower left of the inset) extending some 30,000 light years south from the galaxy's center. This stripping was likely caused by a burst of radiation from the vicinity of the black hole, indicating that the first of the two feasting events had occurred. Evidence for the second, more recent feast comes from the small source of green emission located at the northern tip of the Chandra source in the inset.
Julie Comerford from the University of Colorado at Boulder presented the team's findings in a January 11th, 2018 press briefing at the 231st meeting of the American Astronomical Society held in Washington D.C. A paper on the subject was published in a recent issue of The Astrophysical Journal and is available online. Co-authors on the new study include postdoctoral fellows Rebecca Nevin, Scott Barrows and Francisco Muller-Sanchez of CU Boulder, Jenny Greene of Princeton University, David Pooley from Trinity University, Daniel Stern from the Jet Propulsion Laboratory in Pasadena, California, and Fiona Harrison from the California Institute of Technology.
NASA's Marshall Space Flight Center in Huntsville, Alabama, manages the Chandra program for NASA's Science Mission Directorate in Washington. The Smithsonian Astrophysical Observatory in Cambridge, Massachusetts, controls Chandra's science and flight operations.
Image credit: X-ray NASA/CXC/University of Colorado/J. Comerford et al.; Optical: NASA/STScI
Read More from NASA's Chandra X-ray Observatory.
For more Chandra images, multimedia and related materials, visit:
http://www.nasa.gov/chandra
Editor: Lee Mohon
Publicado por salud equitativa en 11:47