Some 3.9 billion years ago in the heart of a distant galaxy, the intense tidal pull of a monster black hole shredded a star that passed too close. When X-rays produced in this event first reached Earth on March 28, 2011, they were detected by NASA's Swift satellite, which notified astronomers around the world. Within days, scientists concluded that the outburst, now known as Swift J1644+57, represented both the tidal disruption of a star and the sudden flare-up of a previously inactive black hole.
NASA Goddard astronomer Erin Kara discusses the discovery of X-ray echoes from Swift J1644+57, a black hole that shattered a passing star. X-rays produced by flares near this million-solar-mass black hole bounced off the nascent accretion disk and revealed its structure.
Credits: NASA's Goddard Space Flight Center
Download high-resolution video at NASA’s Scientific Visualization Studio
Now astronomers using archival observations from Swift, the European Space Agency's (ESA) XMM-Newton observatory and the Japan-led Suzaku satellite have identified the reflections of X-ray flares erupting during the event. Led by Erin Kara, a postdoctoral researcher at NASA's Goddard Space Flight Center in Greenbelt, Maryland, and the University of Maryland, College Park (UMCP), the team has used these light echoes, or reverberations, to map the flow of gas near a newly awakened black hole for the first time.
"While we don't yet understand what causes X-ray flares near the black hole, we know that when one occurs we can detect its echo a couple of minutes later, once the light  has reached and illuminated parts of the flow," Kara explained. "This technique, called X-ray reverberation mapping, has been previously used to explore stable disks around black holes, but this is the first time we've applied it to a newly formed disk produced by a tidal disruption." 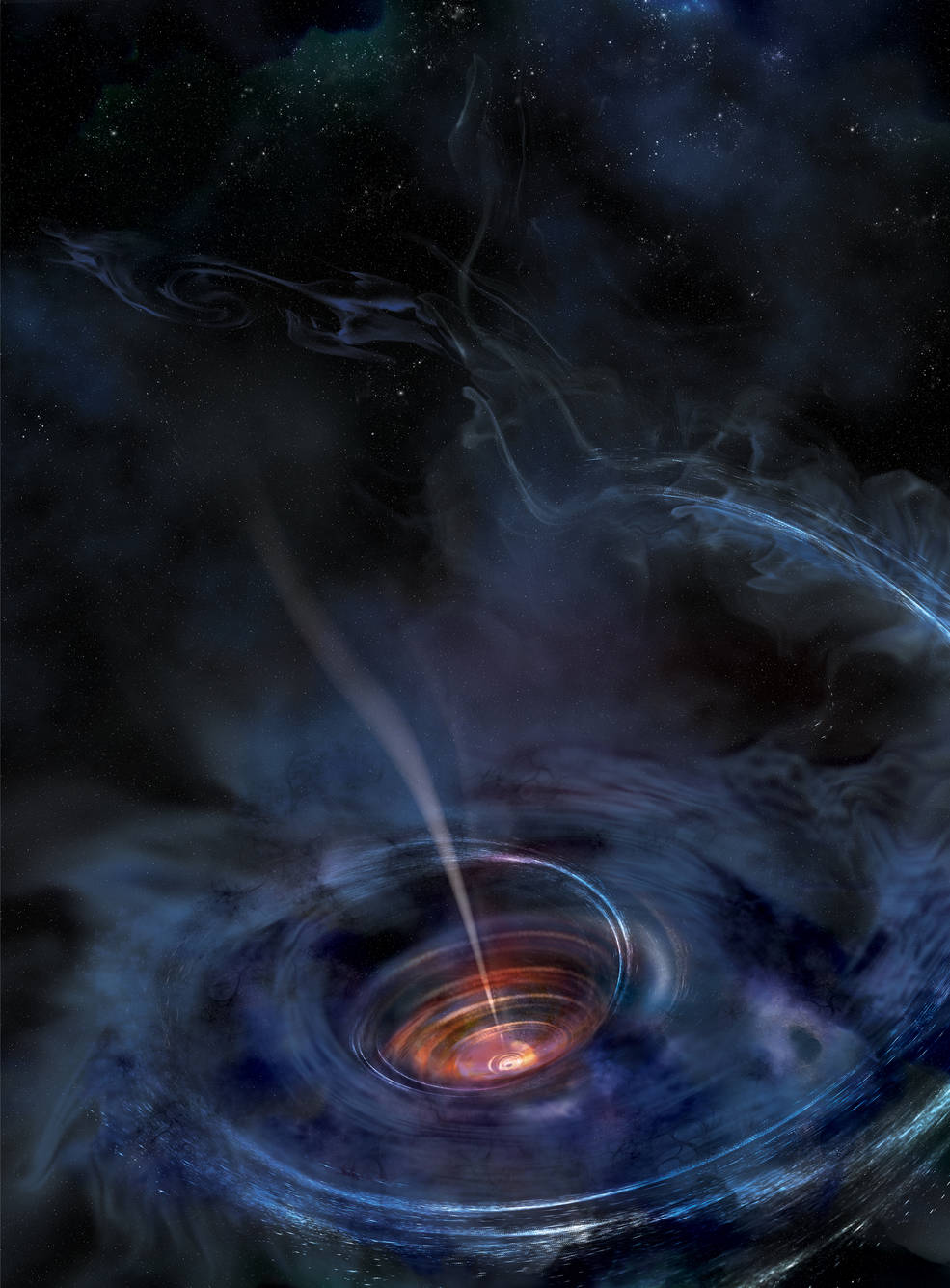 In this artist's rendering, a thick accretion disk has formed around a supermassive black hole following the tidal disruption of a star that wandered too close. Stellar debris has fallen toward the black hole and collected into a thick chaotic disk of hot gas. Flashes of X-ray light near the center of the disk result in light echoes that allow astronomers to map the structure of the funnel-like flow, revealing for the first time strong gravity effects around a normally quiescent black hole.
Credits: NASA/Swift/Aurore Simonnet, Sonoma State University
Stellar debris falling toward a black hole collects into a rotating structure called an accretion disk. There the gas is compressed and heated to millions of degrees before it eventually spills over the black hole's event horizon, the point beyond which nothing can escape and astronomers cannot observe. The Swift J1644+57 accretion disk was thicker, more turbulent and more chaotic than stable disks, which have had time to settle down into an orderly routine. The researchers present the findings in a paper published online in the journal Nature on Wed., June 22.
One surprise from the study is that high-energy X-rays arise from the inner part of the disk. Astronomers had thought most of this emission originated from a narrow jet of particles accelerated to near the speed of light. In blazars, the most luminous galaxy class powered by supermassive black holes, jets produce most of the highest-energy emission.
"We do see a jet from Swift J1644, but the X-rays are coming from a compact region near the black hole at the base of a steep funnel of inflowing gas we're looking down into," said co-author Lixin Dai, a postdoctoral researcher at UMCP. "The gas producing the echoes is itself flowing outward along the surface of the funnel at speeds up to half the speed of light."
X-rays originating near the black hole excite iron ions in the whirling gas, causing them to fluoresce with a distinctive high-energy glow called iron K-line emission. As an X-ray flare brightens and fades, the gas follows in turn after a brief delay depending on its distance from the source.
"Direct light from the flare has different properties than its echo, and we can detect reverberations by monitoring how the brightness changes across different X-ray energies," said co-author Jon Miller, a professor of astronomy at the University of Michigan in Ann Arbor.
Swift J1644+57 is one of only three tidal disruptions that have produced high-energy X-rays, and to date it remains the only event caught at the peak of this emission. These star shredding episodes briefly activate black holes astronomers wouldn't otherwise know about. For every black hole now actively accreting gas and producing light, astronomers think nine others are dormant and dark. These quiescent black holes were active when the universe was younger, and they played an important role in how galaxies evolved. Tidal disruptions therefore offer a glimpse of the silent majority of supersized black holes. 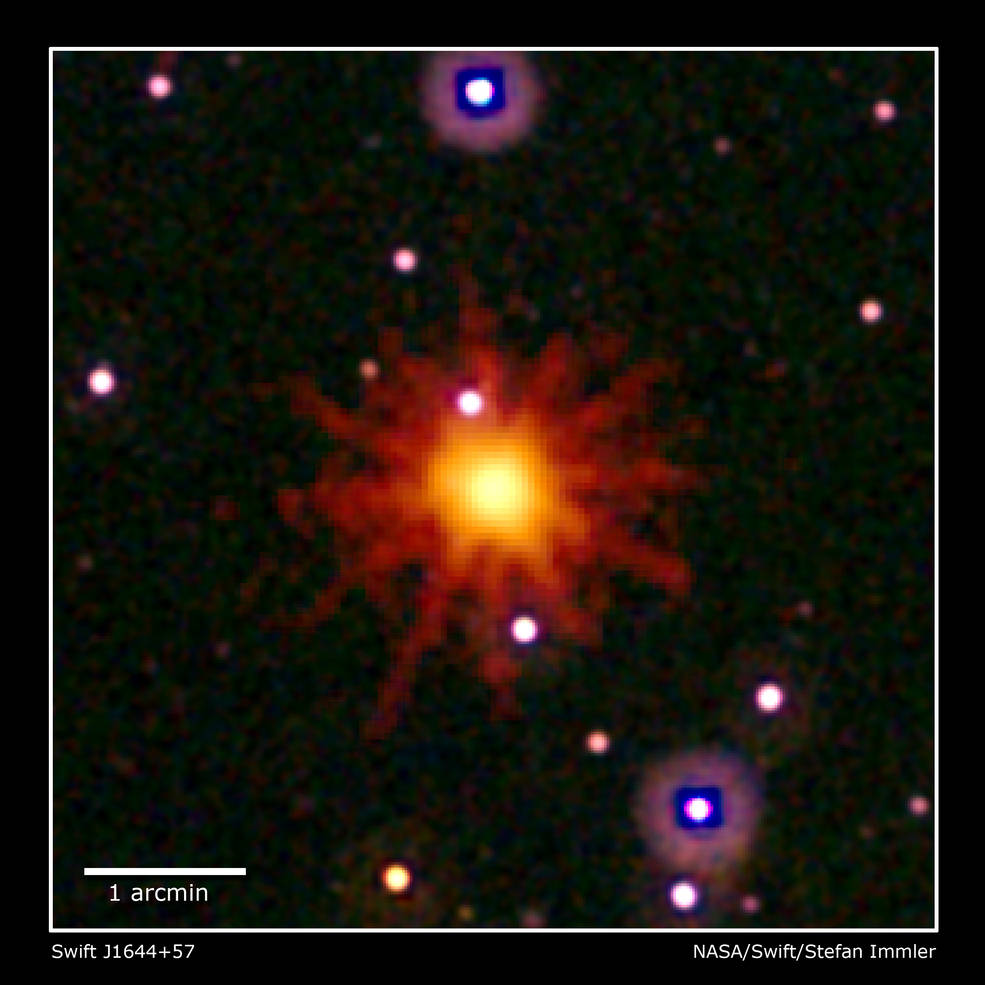 Images from Swift's Ultraviolet/Optical (white, purple) and X-Ray telescopes (yellow and red) were combined in this composite of Swift J1644+57, an X-ray outburst astronomers classify as a tidal disruption event. The event is seen only in the X-ray image, which is a 3.4-hour exposure taken on March 28, 2011. The outburst was triggered when a passing star came too close to a supermassive black hole. The star was torn apart, and much of the gas fell toward the black hole. To date, this is the only tidal disruption event emitting high-energy X-rays that astronomers have caught at peak luminosity.
Credits: NASA/Swift/Stefan Immler
Click here for an unlabeled version of this image.
"If we only look at active black holes, we might be getting a strongly biased sample," said team member Chris Reynolds, a professor of astronomy at UMCP. "It could be that these black holes all fit within some narrow range of spins and masses. So it’s important to study the entire population to make sure we’re not biased."
The researchers estimate the mass of the Swift J1644+57 black hole at about a million times that of the sun but did not measure its spin. With future improvements in understanding and modeling accretion flows, the team thinks it may be possible to do so.
ESA's XMM-Newton satellite was launched in December 1999 from Kourou, French Guiana. NASA funded elements of the XMM-Newton instrument package and provides the NASA Guest Observer Facility at Goddard, which supports use of the observatory by U.S. astronomers. Suzaku operated from July 2005 to August 2015 and was developed at the Japanese Institute of Space and Astronautical Science, which is part of the Japan Aerospace Exploration Agency, in collaboration with NASA and other Japanese and U.S. institutions.
NASA's Swift satellite was launched in November 2004 and is managed by Goddard. It is operated in collaboration with Penn State University in University Park, the Los Alamos National Laboratory in New Mexico, and Orbital Sciences Corp. in Dulles, Virginia, with international collaborators in the U.K., Italy, Germany and Japan.
By Francis ReddyNASA's Goddard Space Flight Center, Greenbelt, Maryland
Editor: Ashley Morrow
Publicado por salud equitativa en 9:06