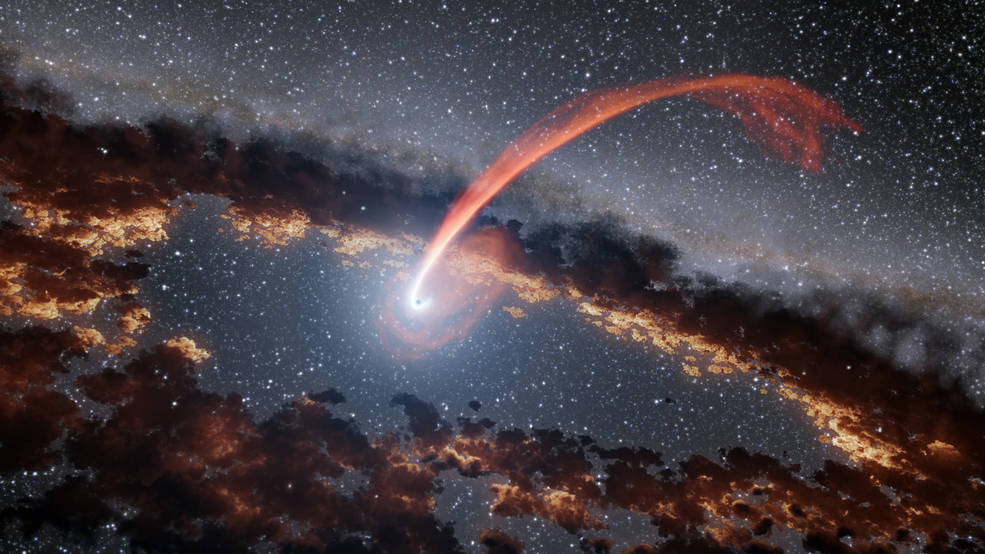 This illustration shows a glowing stream of material from a star as it is being devoured by a supermassive black hole in a tidal disruption flare.
Credits: NASA/JPL-Caltech
Full image and caption
Supermassive black holes, with their immense gravitational pull, are notoriously good at clearing out their immediate surroundings by eating nearby objects. When a star passes within a certain distance of a black hole, the stellar material gets stretched and compressed -- or "spaghettified" -- as the black hole swallows it.
A black hole destroying a star, an event astronomers call "stellar tidal disruption," releases an enormous amount of energy, brightening the surroundings in an event called a flare. In recent years, a few dozen such flares have been discovered, but they are not well understood.
Astronomers now have new insights into tidal disruption flares, thanks to data from NASA's Wide-field Infrared Survey Explorer (WISE). Two new studies characterize tidal disruption flares by studying how surrounding dust absorbs and re-emits their light, like echoes. This approach allowed scientists to measure the energy of flares from stellar tidal disruption events more precisely than ever before.
"This is the first time we have clearly seen the infrared light echoes from multiple tidal disruption events," said Sjoert van Velzen, postdoctoral fellow at Johns Hopkins University, Baltimore, and lead author of a study finding three such events, to be published in the Astrophysical Journal. A fourth potential light echo based on WISE data has been reported by an independent study led by Ning Jiang, a postdoctoral researcher at the University of Science and Technology of China.
Flares from black holes eating stars contain high-energy radiation, including ultraviolet and X-ray light. Such flares destroy any dust that hangs out around a black hole. But at a certain distance from a black hole, dust can survive because the flare's radiation that reaches it is not as intense.
After the surviving dust is heated by a flare, it gives off infrared radiation. WISE measures this infrared emission from the dust near a black hole, which gives clues about tidal disruption flares and the nature of the dust itself. Infrared wavelengths of light are longer than visible light and cannot be seen with the naked eye. The WISE spacecraft, which maps the entire sky every six months, allowed the variation in infrared emission from the dust to be measured.
Astronomers used a technique called "photo-reverberation" or "light echoes" to characterize the dust. This method relies on measuring the delay between the original optical light flare and the subsequent infrared light variation, when the flare reaches the dust surrounding the black hole. This time delay is then used to determine the distance between the black hole and the dust.
Van Velzen's study looked at five possible tidal disruption events, and saw the light echo effect in three of them. Jiang's group saw it in an additional event called ASASSN-14li.
Measuring the infrared glow of dust heated by these flares allows astronomers to make estimates of the location of dust that encircles the black hole at the center of a galaxy.
"Our study confirms that the dust is there, and that we can use it to determine how much energy was generated in the destruction of the star," said Varoujan Gorjian, an astronomer at NASA's Jet Propulsion Laboratory, Pasadena, California, and co-author of the paper led by van Velzen.
Researchers found that the infrared emission from dust heated by a flare causes an infrared signal that can be detected for up to a year after the flare is at its most luminous. The results are consistent with the black hole having a patchy, spherical web of dust located a few trillion miles (half a light-year) from the black hole itself.
"The black hole has destroyed everything between itself and this dust shell," van Velzen said. "It's as though the black hole has cleaned its room by throwing flames."
JPL manages and operates WISE for NASA's Science Mission Directorate in Washington. The spacecraft was put into hibernation mode in 2011, after it scanned the entire sky twice, thereby completing its main objectives. In September 2013, WISE was reactivated, renamed NEOWISE and assigned a new mission to assist NASA's efforts to identify potentially hazardous near-Earth objects.
For more information on WISE, visit:
http://www.nasa.gov/wise
Elizabeth LandauJet Propulsion Laboratory, Pasadena, Calif.818-354-6425elizabeth.landau@jpl.nasa.gov
2016-240
Editor: Tony Greicius