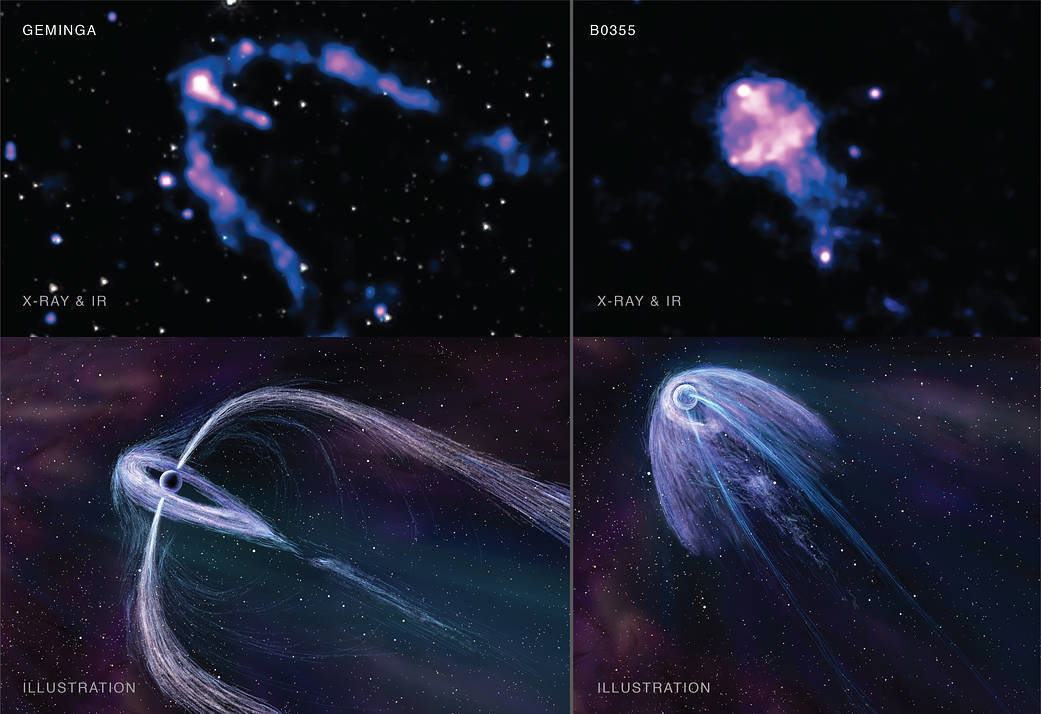 NASA'S Chandra X-ray Observatory has taken deep exposures of two nearby energetic pulsars flying through the Milky Way galaxy. The shape of their X-ray emission suggests there is a geometrical explanation for puzzling differences in behavior shown by some pulsars.
Pulsars − rapidly rotating, highly magnetized, neutron stars born in supernova explosions triggered by the collapse of massive stars − were discovered 50 years ago via their pulsed, highly regular, radio emission.  Pulsars produce a lighthouse-like beam of radiation that astronomers detect as pulses as the pulsar's rotation sweeps the beam across the sky.
Since their discovery, thousands of pulsars have been discovered, many of which produce beams of radio waves and gamma rays. Some pulsars show only radio pulses and others show only gamma-ray pulses. Chandra observations have revealed steadier X-ray emission from extensive clouds of high-energy particles, called pulsar wind nebulas, associated with both types of pulsars. New Chandra data on pulsar wind nebulas may explain the presence or absence of radio and gamma-ray pulses.
This four-panel graphic shows the two pulsars observed by Chandra. Geminga is in the upper left and B0355+54 is in the upper right. In both of these images, Chandra’s X-rays, colored blue and purple, are combined with infrared data from NASA’s Spitzer Space Telescope that shows stars in the field of view. Below each data image, an artist’s illustration depicts more details of what astronomers think the structure of each pulsar wind nebula looks like.
For Geminga, a deep Chandra observation totaling nearly eight days over several years was analyzed to show sweeping, arced trails spanning half a light year and a narrow structure directly behind the pulsar. A five-day Chandra observation of the second pulsar, B0355+54, showed a cap of emission followed by a narrow double trail extending almost five light years.
The underlying pulsars are quite similar, both rotating about five times per second and both aged about half a million years. However, Geminga shows gamma-ray pulses with no bright radio emission, while B0355+54 is one of the brightest radio pulsars known yet not seen in gamma rays.
A likely interpretation of the Chandra images is that the long narrow trails to the side of Geminga and the double tail of B0355+54 represent narrow jets emanating from the pulsar’s spin poles. Both pulsars also contain a torus of emission spreading from the pulsar’s spin equator. These disk-shaped structures and the jets are crushed and swept back as the pulsars fly through the Galaxy at supersonic speeds
In the case of Geminga, the view of the torus is close to edge-on, while the jets point out to the sides.  B0355+54 has a similar structure, but with the torus viewed nearly face-on and the jets pointing nearly directly towards and away from Earth. In B0355+54, the swept-back jets appear to lie almost on top of each other, giving a doubled tail.
Both pulsars have magnetic poles quite close to their spin poles, as is the case for the Earth’s magnetic field. These magnetic poles are the site of pulsar radio emission so astronomers expect the radio beams to point in a similar direction as the jets. By contrast the gamma-ray emission is mainly produced along the spin equator and so aligns with the torus.
For Geminga, astronomers view the bright gamma-ray pulses along the edge of the torus, but the radio beams near the jets point off to the sides and remain unseen. For B0355+54, a jet points almost along our line of sight towards the pulsar. This means astronomers see the bright radio pulses, while the torus and its associated gamma-ray emission are directed in a perpendicular direction to our line of sight, missing the Earth.
These two deep Chandra images have, therefore, exposed the spin orientation of these pulsars, helping to explain the presence, and absence, of the radio and gamma-ray pulses.
The Chandra observations of Geminga and B0355+54 are part of a large campaign, led by Roger Romani of Stanford University, to study six pulsars that have been seen to emit gamma-rays. The survey sample covers a range of ages, spin-down properties and expected inclinations, making it a powerful test of pulsar emission models.
A paper on Geminga led by Bettina Posselt of Penn State University was accepted for publication in The Astrophysical Journal and is available online. A paper on B0355+54 led by Noel Klingler of the George Washington University was published in the December 20th, 2016 issue of The Astrophysical Journal and is available online. NASA’s Marshall Space Flight Center in Huntsville, Alabama, manages the Chandra program for NASA’s Science Mission Directorate in Washington. The Smithsonian Astrophysical Observatory in Cambridge, Massachusetts, controls Chandra’s science and flight operations.
Image credit: Geminga image: NASA/CXC/PSU/B. Posselt et al; Infrared: NASA/JPL-Caltech; B0355+54: X-ray: NASA/CXC/GWU/N. Klingler et al; Infrared: NASA/JPL-Caltech; Illustrations: Nahks TrEhnl
Read More from NASA's Chandra X-ray Observatory.
For more Chandra images, multimedia and related materials, visit:
http://www.nasa.gov/chandra
Editor: Lee Mohon