On recent summer afternoons on Mars, navigation cameras aboard NASA's Curiosity Mars rover observed several whirlwinds carrying Martian dust across Gale Crater. Dust devils result from sunshine warming the ground, prompting convective rising of air. All the dust devils were seen in a southward direction from the rover. Timing is accelerated and contrast has been modified to make frame-to-frame changes easier to see. 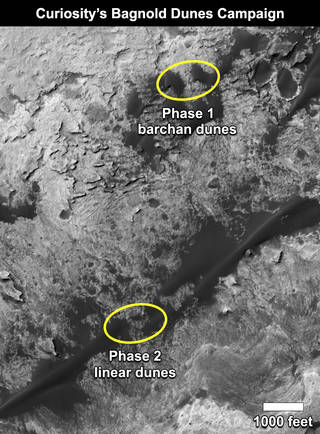 This map shows the two locations of a research campaign by NASA's Curiosity Mars rover mission to investigate active sand dunes on Mars. In late 2015, Curiosity reached crescent-shaped dunes, called barchans. In February 2017, the rover reached a location where the dunes are linear in shape.
Credits: NASA/JPL-Caltech/Univ. of Arizona
Full image and caption
On Mars, wind rules. Wind has been shaping the Red Planet's landscapes for billions of years and continues to do so today. Studies using both a NASA orbiter and a rover reveal its effects on scales grand to tiny on the strangely structured landscapes within Gale Crater.
NASA's Curiosity Mars rover, on the lower slope of Mount Sharp -- a layered mountain inside the crater -- has begun a second campaign of investigating active sand dunes on the mountain's northwestern flank. The rover also has been observing whirlwinds carrying dust and checking how far the wind moves grains of sand in a single day's time.
Gale Crater observations by NASA's Mars Reconnaissance Orbiter have confirmed long-term patterns and rates of wind erosion that help explain the oddity of having a layered mountain in the middle of an impact crater.
"The orbiter perspective gives us the bigger picture -- on all sides of Mount Sharp and the regional context for Gale Crater. We combine that with the local detail and ground-truth we get from the rover," said Mackenzie Day of the University of Texas, Austin, lead author of a research report in the journal Icarus about wind's dominant role at Gale.
The combined observations show that wind patterns in the crater today differ from when winds from the north removed the material that once filled the space between Mount Sharp and the crater rim. Now, Mount Sharp itself has become a major factor in determining local wind directions. Wind shaped the mountain; now the mountain shapes the wind.
The Martian atmosphere is about a hundred times thinner than Earth's, so winds on Mars exert much less force than winds on Earth. Time is the factor that makes Martian winds so dominant in shaping the landscape. Most forces that shape Earth's landscapes -- water that erodes and moves sediments, tectonic activity that builds mountains and recycles the planet's crust, active volcanism -- haven't influenced Mars much for billions of years. Sand transported by wind, even if infrequent, can whittle away Martian landscapes over that much time.

This pair of images shows effects of one Martian day of wind blowing sand underneath NASA's Curiosity Mars rover on a non-driving day for the rover. Each image was taken just after sundown by the rover's Mars Descent Imager (MARDI). The area of ground shown spans about 3 feet left-to-right.
Credits: NASA/JPL-Caltech/MSSS
Full image and caption
How to Make a Layered Mountain
Gale Crater was born when the impact of an asteroid or comet more than 3.6 billion years ago excavated a basin nearly 100 miles (160 kilometers) wide. Sediments including rocks, sand and silt later filled the basin, some delivered by rivers that flowed in from higher ground surrounding Gale. Curiosity has found evidence of that wet era from more than 3 billion years ago. A turning point in Gale's history -- when net accumulation of sediments flipped to net removal by wind erosion -- may have coincided with a key turning point in the planet's climate as Mars became drier, Day noted.

The left side of this 360-degree panorama from NASA's Curiosity Mars rover shows the long rows of ripples on a linear shaped dune in the Bagnold Dune Field on the northwestern flank of Mount Sharp. The rover's Navigation Camera recorded the component images of this mosaic on Feb. 5, 2017.
Credits: NASA/JPL-Caltech
Full image and caption
Scientists first proposed in 2000 that the mound at the center of Gale Crater is a remnant from wind eroding what had been a totally filled basin. The new work calculates that the vast volume of material removed -- about 15,000 cubic miles (64,000 cubic kilometers) -- is consistent with orbital observations of winds' effects in and around the crater, when multiplied by a billion or more years.
Other new research, using Curiosity, focuses on modern wind activity in Gale.
The rover this month is investigating a type of sand dune that differs in shape from dunes the mission investigated in late 2015 and early 2016. Crescent-shaped dunes were the feature of the earlier campaign -- the first ever up-close study of active sand dunes anywhere other than Earth. The mission's second dune campaign is at a group of ribbon-shaped linear dunes.
"In these linear dunes, the sand is transported along the ribbon pathway, while the ribbon can oscillate back and forth, side to side," said Nathan Bridges, a Curiosity science team member at the Johns Hopkins University Applied Physics Laboratory in Laurel, Maryland.

Beyond a dark sand dune closer to the rover, a Martian dust devil passes in front of the horizon in this sequence of images from NASA's Curiosity Mars rover. The rover's Navigation Camera made this series of observations on Feb. 4, 2017, during the local afternoon in Mars' Gale Crater.
Credits: NASA/JPL-Caltech/TAMU
Full image and caption
The season at Gale Crater is now summer, the windiest time of year. That's the other chief difference from the first dune campaign, conducted during less-windy Martian winter.
"We're keeping Curiosity busy in an area with lots of sand at a season when there's plenty of wind blowing it around," said Curiosity Project Scientist Ashwin Vasavada of NASA's Jet Propulsion Laboratory, Pasadena, California. "One aspect we want to learn more about is the wind's effect on sorting sand grains with different composition. That helps us interpret modern dunes as well as ancient sandstones."
Before Curiosity heads farther up Mount Sharp, the mission will assess movement of sand particles at the linear dunes, examine ripple shapes on the surface of the dunes, and determine the composition mixture of the dune material.
Shifting Sand and 'Dust Devils'

Dust devils dance in the distance in this sequence of images taken by the Navigation Camera on NASA's Curiosity Mars rover on Feb. 12, 2017, during the afternoon of the rover's 1,607th Martian day, or sol.
Credits: NASA/JPL-Caltech/TAMU
Full image and caption
Images taken one day apart of the same piece of ground, including some recent pairs from the downward-looking camera that recorded the rover's landing-day descent, show small ripples of sand moving about an inch (2.5 centimeters) downwind.
Meanwhile, whirlwinds called "dust devils" have been recorded moving across terrain in the crater, in sequences of afternoon images taken several seconds apart.
After completing the planned dune observations and measurements, Curiosity will proceed southward and uphill toward a ridge where the mineral hematite has been identified from Mars Reconnaissance Orbiter observations. The Curiosity science team has decided to call this noteworthy feature the "Vera Rubin Ridge," commemorating Vera Cooper Rubin (1928-2016), whose astronomical observations provided evidence for the existence of the universe's dark matter.

This sequence of images shows a dust-carrying whirlwind, called a dust devil, on lower Mount Sharp inside Gale Crater, as viewed by NASA's Curiosity Mars Rover during the summer afternoon of the rover's 1,613rd Martian day, or sol (Feb. 18, 2017).
Credits: NASA/JPL-Caltech/TAMU
Full image and caption
As Curiosity focuses on the sand dunes, rover engineers are analyzing results of diagnostic tests on the drill feed mechanism, which drives the drill bit in and out during the process of collecting sample material from a rock. One possible cause of an intermittent issue with the mechanism is that a plate for braking the movement may be obstructed, perhaps due to a small piece of debris, resisting release of the brake. The diagnostic tests are designed to be useful in planning the best way to resume use of the drill.
The rover team is also investigating why the lens cover on Curiosity's arm-mounted Mars Hand Lens Imager (MAHLI) did not fully open in response to commands on Feb. 24. The arm has been raised to minimize risk of windborne sand reaching the lens while the cover is partially open. Diagnostic tests of the lens cover are planned this week.

This sequence of images shows a dust-carrying whirlwind, called a dust devil, scooting across ground inside Gale Crater, as observed on the local summer afternoon of NASA's Curiosity Mars Rover's 1,597th Martian day, or sol (Feb. 1, 2017). Timing is accelerated in this animation.
Credits: NASA/JPL-Caltech/TAMU
Full image and captio
During the first year after Curiosity's 2012 landing in Gale Crater, the mission fulfilled its main goal by finding that the region once offered environmental conditions favorable for microbial life. The conditions in long-lived ancient freshwater Martian lake environments included all of the key chemical elements needed for life as we know it, plus a chemical source of energy that is used by many microbes on Earth. The extended mission is investigating how and when the habitable ancient conditions evolved into conditions drier and less favorable for life. For more information about Curiosity, visit:
http://www.nasa.gov/curiosity
Guy Webster
Jet Propulsion Laboratory, Pasadena, Calif.
818-354-6278
guy.webster@jpl.nasa.gov
Laurie Cantillo / Dwayne Brown
NASA Headquarters, Washington
202-358-1077 / 202-358-1726
laura.l.cantillo@nasa.gov / dwayne.c.brown@nasa.gov
2017-050
Editor: Tony Greicius
Publicado por salud equitativa en 7:45