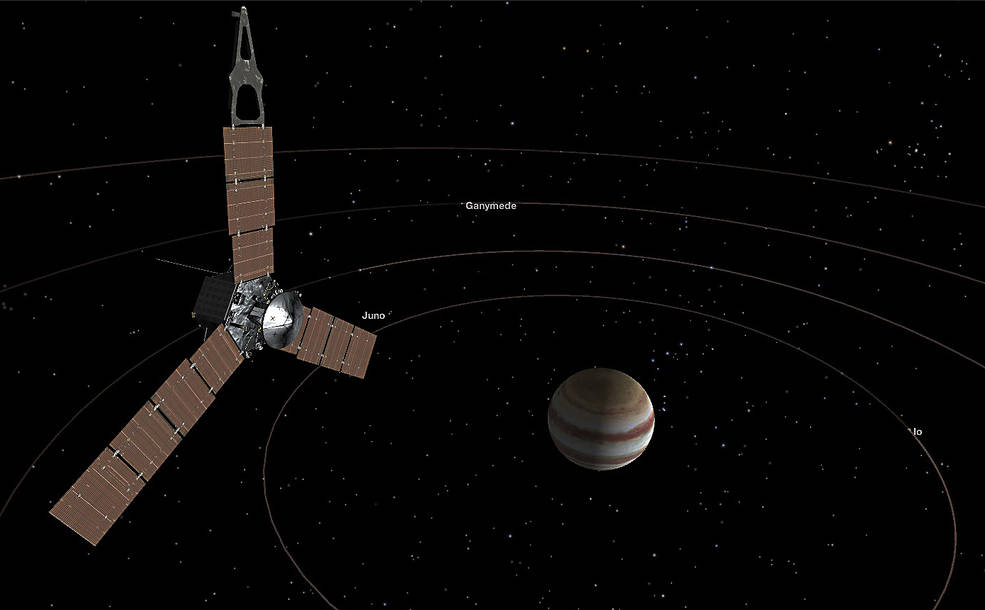 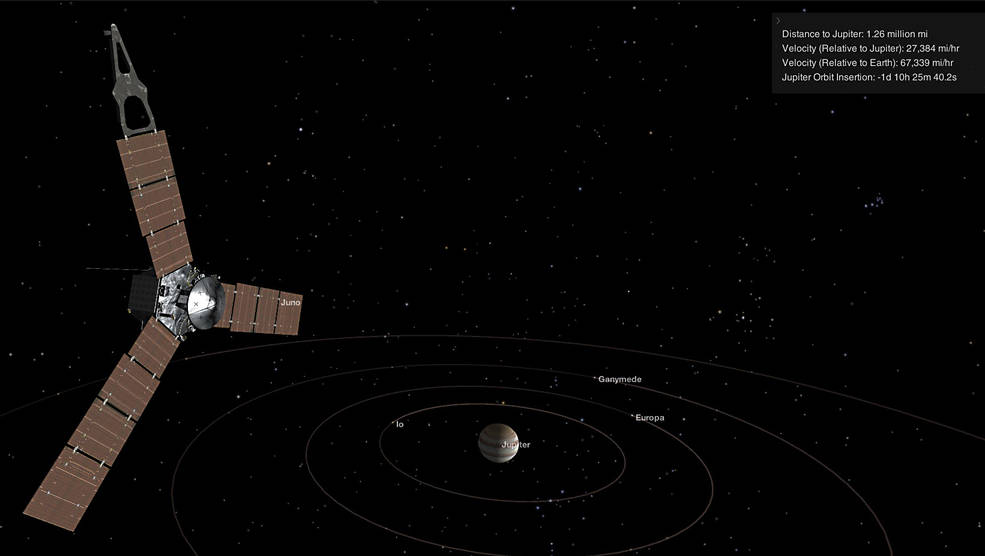 to Remain in Current 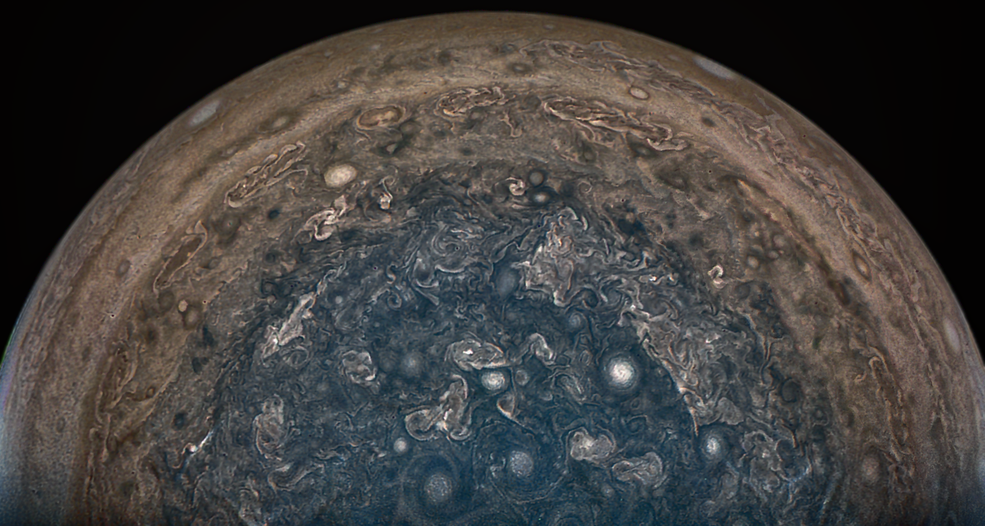 NASA’s Juno spacecraft soared directly over Jupiter’s south pole when JunoCam acquired this image on Feb. 2, 2017, from an altitude of about 62,800 miles (101,000 kilometers) above the cloud tops. This image was processed by citizen scientist John Landino. This enhanced color version highlights the bright high clouds and numerous meandering oval storms.
Credits: NASA/JPL-Caltech/SwRI/MSSS/John Landino
JunoCam raw images
NASA’s Juno mission to Jupiter, which has been in orbit around the gas giant since July 4, 2016, will remain in its current 53-day orbit for the remainder of the mission. This will allow Juno to accomplish its science goals, while avoiding the risk of a previously-planned engine firing that would have reduced the spacecraft’s orbital period to 14 days.
“Juno is healthy, its science instruments are fully operational, and the data and images we’ve received are nothing short of amazing,” said Thomas Zurbuchen, associate administrator for NASA’s Science Mission Directorate in Washington. “The decision to forego the burn is the right thing to do – preserving a valuable asset so that Juno can continue its exciting journey of discovery.”
Juno has successfully orbited Jupiter four times since arriving at the giant planet, with the most recent orbit completed on Feb. 2. Its next close flyby of Jupiter will be March 27.
The orbital period does not affect the quality of the science collected by Juno on each flyby, since the altitude over Jupiter will be the same at the time of closest approach. In fact, the longer orbit provides new opportunities that allow further exploration of the far reaches of space dominated by Jupiter’s magnetic field, increasing the value of Juno’s research.
During each orbit, Juno soars low over Jupiter’s cloud tops – as close as about 2,600 miles (4,100 kilometers). During these flybys, Juno probes beneath the obscuring cloud cover and studies Jupiter’s auroras to learn more about the planet's origins, structure, atmosphere and magnetosphere.
The original Juno flight plan envisioned the spacecraft looping around Jupiter twice in 53-day orbits, then reducing its orbital period to 14 days for the remainder of the mission. However, two helium check valves that are part of the plumbing for the spacecraft’s main engine did not operate as expected when the propulsion system was pressurized in October. Telemetry from the spacecraft indicated that it took several minutes for the valves to open, while it took only a few seconds during past main engine firings.
“During a thorough review, we looked at multiple scenarios that would place Juno in a shorter-period orbit, but there was concern that another main engine burn could result in a less-than-desirable orbit,” said Rick Nybakken, Juno project manager at NASA’s Jet Propulsion Laboratory (JPL) in Pasadena, California. “The bottom line is a burn represented a risk to completion of Juno’s science objectives.”
Juno’s larger 53-day orbit allows for “bonus science” that wasn’t part of the original mission design. Juno will further explore the far reaches of the Jovian magnetosphere – the region of space dominated by Jupiter’s magnetic field – including the far magnetotail, the southern magnetosphere, and the magnetospheric boundary region called the magnetopause. Understanding magnetospheres and how they interact with the solar wind are key science goals of NASA’s Heliophysics Science Division.
"Another key advantage of the longer orbit is that Juno will spend less time within the strong radiation belts on each orbit,” said Scott Bolton, Juno principal investigator from Southwest Research Institute in San Antonio. “This is significant because radiation has been the main life-limiting factor for Juno.”
Juno will continue to operate within the current budget plan through July 2018, for a total of 12 science orbits. The team can then propose to extend the mission during the next science review cycle. The review process evaluates proposed mission extensions on the merit and value of previous and anticipated science returns.
The Juno science team continues to analyze returns from previous flybys. Revelations include that Jupiter's magnetic fields and aurora are bigger and more powerful than originally thought and that the belts and zones that give the gas giant’s cloud top its distinctive look extend deep into the planet’s interior. Peer-reviewed papers with more in-depth science results from Juno’s first three flybys are expected to be published within the next few months. In addition, the mission's JunoCam – the first interplanetary outreach camera – is now being guided with assistance from the public. People can participate by voting on which features on Jupiter should be imaged during each flyby.
“Juno is providing spectacular results, and we are rewriting our ideas of how giant planets work,” said Bolton. “The science will be just as spectacular as with our original plan.”
JPL manages the Juno mission for NASA. The mission’s principal investigator is Scott Bolton at Southwest Research Institute in San Antonio. The Juno mission is part of the New Frontiers Program managed by NASA's Marshall Space Flight Center in Huntsville, Alabama, for the Science Mission Directorate. Lockheed Martin Space Systems, Denver, built the spacecraft. JPL is managed for NASA by Caltech in Pasadena, California.
More information on the Juno mission is available at:
http://www.nasa.gov/juno
http://missionjuno.org
Follow the mission on Facebook and Twitter at:
http://www.facebook.com/NASAJuno
http://www.twitter.com/NASAJuno
-end-
Dwayne Brown / Laurie Cantillo
Headquarters, Washington
202-358-1726 / 202-358-1077
dwayne.c.brown@nasa.gov / laura.l.cantillo@nasa.gov
DC Agle
Jet Propulsion Laboratory, Pasadena, Calif.
818-393-9011
agle@jpl.nasa.gov
Editor: Karen Northon
Publicado por salud equitativa en 4:57