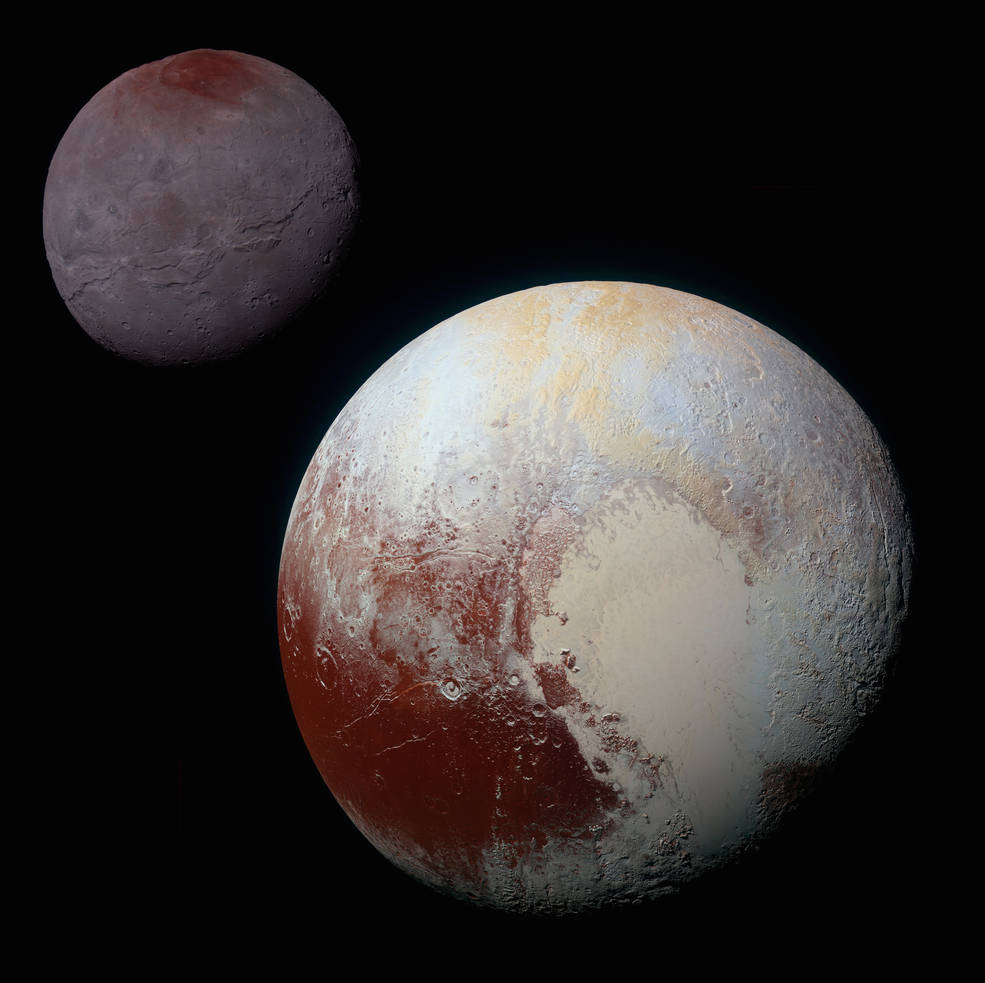 This composite of enhanced color images of Pluto (lower right) and Charon (upper left), taken by NASA's New Horizons spacecraft on July 14, 2015, highlights the wide range of surface features on the small worlds. Working with the New Horizons mission team, the International Astronomical Union (IAU) has approved the themes to be used for naming the surface features on Pluto and its moons.
Credits: NASA/JHUAPL/SwRI
In 2015, NASA’s New Horizons spacecraft delivered the first close-up views of Pluto and its five moons – amazing images of distant and surprisingly complex worlds, showing a vast nitrogen glacier as well as ice mountains, canyons, cliffs, craters and more. The IAU’s action clears the way for the mission team to propose formal names for dozens of individual surface features.
“Imagine the thrill of seeing your name suggestion on a future map of Pluto and its moons,” said Jim Green, director of NASA’s Planetary Science Division in Washington. “Months after the Pluto flyby, the New Horizons mission continues to engage and inspire.”
Working with the New Horizons team, the IAU has agreed to naming themes (listed below) for Pluto, its largest moon, Charon, and its four smaller moons—Styx, Nix, Kerberos, and Hydra. Some of these themes build on the connection between the Roman god Pluto and the mythology of the underworld. Other themes celebrate the human spirit of exploration.
Pluto●    Gods, goddesses and other beings associated with the underworld from mythology, folklore and literature●    Names for the underworld and for underworld locales from mythology, folklore and literature●    Heroes and other explorers of the underworld●    Scientists and engineers associated with Pluto and the Kuiper Belt●    Pioneering space missions and spacecraft●    Historic pioneers who crossed new horizons in the exploration of the Earth, sea and sky
Charon●    Destinations and milestones of fictional space and other exploration●    Fictional and mythological vessels of space and other exploration●    Fictional and mythological voyagers, travelers and explorers●    Authors and artists associated with space exploration, especially Pluto and the Kuiper Belt
Themes for Pluto’s smaller moons are:•    Styx: River gods•    Nix: Deities of the night•    Kerberos: Dogs from literature, mythology and history•    Hydra: Legendary serpents and dragons
As a precursor to the naming process now underway between the IAU and New Horizons, in early 2015 the IAU endorsed the NASA-New Horizons led “Our Pluto” naming campaign, which allowed the public to participate in the exploration of Pluto by proposing names for surface features that were still awaiting discovery. That campaign was a partnership between the mission, NASA and the SETI Institute, of Mountain View, California.
“I’m very happy with both the process and partnership that New Horizons and the IAU undertook that led to wonderful, inspiring, and engaging naming themes for surface features on Pluto and its moons,” said Alan Stern, New Horizons principal investigator from Southwest Research Institute, Boulder, Colorado. “We look forward to the next step—submitting actual feature names for approval.”
Editor: Tricia Talbert
Publicado por salud equitativa en 6:21