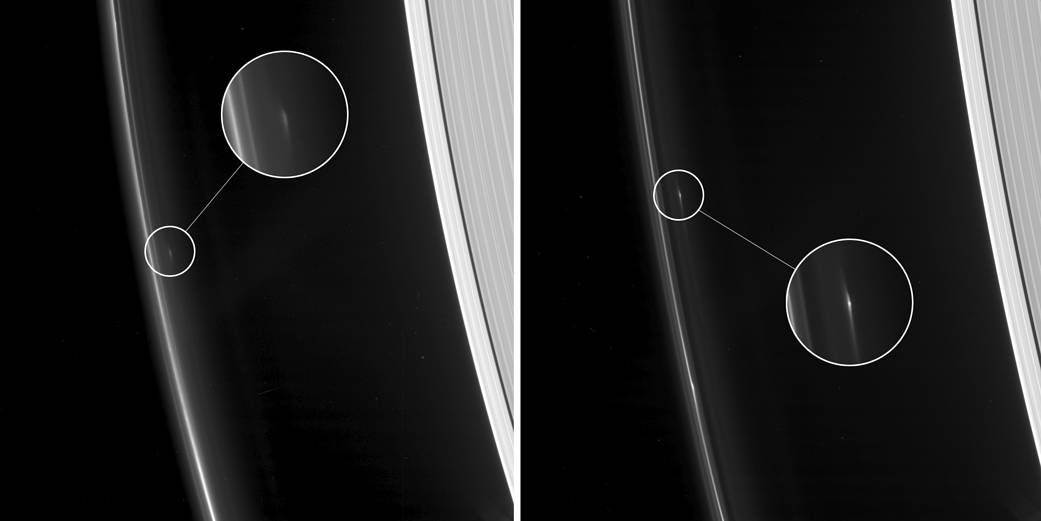 As NASA's Cassini spacecraft continues its weekly ring-grazing orbits, diving just past the outside of Saturn's F ring, it is tracking several small, persistent objects there.
These images show two such objects that Cassini originally detected in spring 2016, as the spacecraft transitioned from more equatorial orbits to orbits at increasingly high inclination about the planet's equator.
Imaging team members studying these objects gave them the informal designations F16QA (right image) and F16QB (left image). The researchers have observed that objects such as these occasionally crash through the F ring's bright core, producing spectacular collisional structures (see PIA08863), similar to those created in 2006 and 2007 by the object designated S/2004 S 6 (see PIA07716).
While these objects may be mostly loose agglomerations of tiny ring particles, scientists suspect that small, fairly solid bodies lurk within each object, given that they have survived several collisions with the ring since their discovery. The faint retinue of dust around them is likely the result of the most recent collision each underwent before these images were obtained.
The researchers think these objects originally form as loose clumps in the F ring core as a result of perturbations triggered by Saturn's moon Prometheus (see PIA08397 and PIA08947). If they survive subsequent encounters with Prometheus, their orbits can evolve, eventually leading to core-crossing clumps that produce spectacular features, even though they collide with the ring at low speeds.
The images were obtained using the Cassini spacecraft narrow-angle camera on Feb. 5, 2017, at a distance of 610,000 miles (982,000 kilometers, left image) and 556,000 miles (894,000 kilometers, right image) from the F ring. Image scale is about 4 miles (6 kilometers) per pixel.
The Cassini mission is a cooperative project of NASA, ESA (the European Space Agency) and the Italian Space Agency. The Jet Propulsion Laboratory, a division of the California Institute of Technology in Pasadena, manages the mission for NASA's Science Mission Directorate, Washington. The Cassini orbiter and its two onboard cameras were designed, developed and assembled at JPL. The imaging operations center is based at the Space Science Institute in Boulder, Colorado.
For more information about the Cassini-Huygens mission visit http://saturn.jpl.nasa.gov and http://www.nasa.gov/cassini. The Cassini imaging team homepage is at http://ciclops.org.
Image Credit: NASA/JPL-Caltech/Space Science Institute
› Unannotated version
Editor: Tony Greicius
Publicado por salud equitativa en 4:59