Lessons from a Rabbit, a Cat and an Otter | MercatorNet

Lessons from a Rabbit, a Cat and an Otter

Lessons from a Rabbit, a Cat and an Otter

Three books that nurtured my respect for and love of animals and nature.

I still have the first book I ever owned: The Wonderful Tar Baby, adapted from the original Uncle Remus Story by Joel Chandler Harris. My father gave it to me on my sixth birthday. I had just started school and was learning to read. I’d follow the words and startling illustrations, as Dad read it to me.
In the story Br’er Fox and Br’er Bear are very annoyed by Br’er Rabbit’s cocky ways. They build a “tar baby”, which they dress in a hat and coat and set beside the path, and hide to watch events unfold. Br’er Rabbit comes cheerfully hopping along and politely greets the Tar Baby. He becomes increasingly angry as he receives no response and, after repeated warnings, lashes out. His arm becomes stuck in the tar, then his other arm and both legs, and finally his head.
When he is completely immobilized Br’er Fox and Br’er Bear emerge from the bushes delighted at Br’er Rabbit’s predicament and discuss various ways of dealing with him: knocking off his head, roasting, hanging, drowning or skinning him. As each is suggested, Br’er Rabbit pleads, “Do anything you like, but please, please just don’t throw me in the Briar Patch.” They decide to do just that, because it seems to be the only intervention he fears. Unknown to them, Br’er Rabbit was born in the Briar Patch – it’s home for him.
Br’er Fox and Br’er Bear gleefully toss Br’er Rabbit off a cliff into the Briar Patch. He screams and moans pretending to be dying and his two assassins celebrate. But suddenly he emerges on the far side of the Briar Patch, “frisky as a cricket”, cheerfully greets Br’er Fox and Br’er Bear and prances off down the road, laughing, leaving them furious that they have been tricked.
No matter how many times I heard the story, I still feared for Br’er Rabbit’s life and was overjoyed when he outsmarted Br’er Fox and Br’er Bear. Re-reading it, now, I am astonished at how violent it is, but at the same time playful and hopeful. So what messages does it communicate?
The more that Br’er Rabbit tangled with the Tar Baby the dirtier and more trapped he became. Wikipedia explains that “In modern usage, “tar baby” refers to any “sticky situation” that is only aggravated by additional involvement with it.”
The “little guy”, the “under-bunny”, wins against the “big guys”, not through brute strength, but through courage and outsmarting them with words. As I discuss in Bird on an Ethics Wire words are the weapons in our values battles in contemporary Western democracies.
Br’er Fox’s and Br’er Bear’s repugnance for Br’er Rabbit is portrayed as being elicited by his optimism and joyfulness. Might they be jealous of these emotional characteristics of Br’er Rabbit? Might they want to humiliate Br’er Rabbit in order to feel better about themselves? Misery loves company. 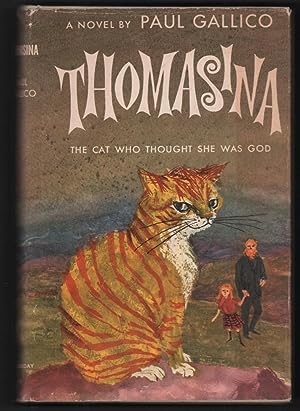 My fifteenth birthday present from my father was Paul Gallico’s 1957 novel Thomasina, the Cat Who Thought She Was God. The story, set in Scotland in 1912, features Andrew MacDhui, a widowed veterinarian who lost his faith in God when his wife died, Mary, his seven-year-old daughter, and Thomasina, Mary’s cat, who is the narrator.
Thomasina has an accident and Mary brings her to her father for treatment. She is euthanized on Mr. MacDhui’s orders.Mary is devastated. Thomasina goes to feline Heaven, but is sent back to Earth because she has only used one of her nine lives, not the nine required for admission. She has no memory of her first life with Mary and is adopted by a loving woman who cares for sick animals she finds in the woods, where she lives. This is Thomasina’s second life.
Thomasina’s memory slowly recovers and she follows a vaguely familiar path back to Mary’s home. Mary chases her into a rainstorm resulting in Mary contracting pneumonia and becoming deathly ill. Mary’s father abandons his atheism and prays for her to be saved. Lightning strikes a tree and Thomasina’s memory floods back. She returns to Mary’s house and Mr. MacDhui places Thomasina in Mary’s arms restoring Mary’s will to live. So, Thomasina embarks on her third life.
I related very strongly to this story as I found many points of contact and parallels between it and my life up to that time: my love of cats and their companionship; nearly dying from an illness; a deep bond with nature and respect for the natural, both nurtured by my father; a father’s love for his daughter, my father’s love for me.
My cats were my childhood companions and are such even today. I recently did an interview in which I claimed that my cats and I have conversations. The obviously surprised interviewer said, “But cats can’t talk!”. I explained that a meow is not just a meow and if one knows a cat and he knows you, interspecies communication is a reality. My family on both sides comes from Outback Australia and were used to interacting with animals both wild and domestic, the latter of which had included cats. My first cat, Tiggy, lived with us from the time I was a baby.
Like Mary, I nearly died as a child, in my case from peritonitis caused by a ruptured appendix when I was 11 years old. I still have a photograph of myself cuddling my cat, Boots, on the day I returned home from hospital. My father, who had been a Roman Catholic altar boy in his youth, like Mr. MacDhui, was an atheist at this point in his life. I wonder whether he turned to prayer when I was so ill.

My eighteenth birthday present from my father was Ring of Bright Water by Gavin Maxwell. In it, Maxwell describes his relationships with three otters, the first of whom Mijbil, he brought back from Iraq and raised as a pet at his home on the west coast of Scotland. Tragically Mijbil was murdered. The other two, Edal and Teko, Maxwell adopted to save them from a zoo. Again tragically, Edal was burnt to death in a fire that destroyed Maxwell’s house. Maxwell had her buried under a tree and placed a cairn over the grave with the words: “Whatever joy she gave to you, give back to Nature.” That reminds me of my father’s philosophy about animals and Nature.
Today there is stringent criticism of treating wild animals as Maxwell did. But Marcus Field, a renowned nature writer, reminds us “how Ring of Bright Water so perfectly articulates the need for the human soul to be free” and a reviewer described the book as having “inspired a generation of naturalists” and referred to it as a “classic account of man and wildlife”.
The animals in all three books provide insights about how we humans should behave and what respectful interaction with animals and Nature requires. They tell us that interspecies friendship is possible and that, as my father believed, we have much to learn from Nature, especially spiritually, that will enrich our lives. The link for me, personally, is that all the books were given to me by my father, who was a very important person in relation to the values and philosophy of life that have become my touchstone.
Margaret Somerville is Professor of Bioethics in the School of Medicine at the University of Notre Dame Australia. Until recently, she was Samuel Gale Professor of Law, Professor in the Faculty of Medicine, and Founding Director of the Centre for Medicine, Ethics and Law at McGill University, Montreal. Her most recent book is Bird on an Ethics Wire: Battles about Values in the Culture Wars. This article was first published by Books Combined.
- See more at: https://www.mercatornet.com/bookreviews/view/lessons-from-a-rabbit-a-cat-and-an-otter/19414#sthash.ogTwDbDM.dpuf

I have just realised that all of today's posts are about media of various kinds.
Shannon Roberts highlights an online tool for tracking "the decomposition of the American family over time". Robin Taylor, from the app-maker Rakkoon, discusses a more sophisticated way to use SnapChat. I have critiqued a Facebook video about the gay Mardi Gras in Sydney. And Margaret Somerville reminisces about those old-fashioned things called books.
But the most important news is linked to our lead story. Our associate editor, Zac Alstin, has just published his first novel, To Create a World. It’s a fantasy aimed at a middle-grade audience about a boy who enters a hidden, magical world to find a cure for his sick sister. In his article, he explains why he's sure that fantasy novels are worthwhile.
Enjoy!