A trip past the sun may have selectively altered the production of one form of water in a comet – an effect not seen by astronomers before, a new NASA study suggests.
Astronomers from NASA’s Goddard Space Flight Center in Greenbelt, Maryland, observed the Oort cloud comet C/2014 Q2, also called Lovejoy, when it passed near Earth in early 2015. Through NASA’s partnership in the W. M. Keck Observatory on Mauna Kea, Hawaii, the team observed the comet at infrared wavelengths a few days after Lovejoy passed its perihelion – or closest point to the sun. 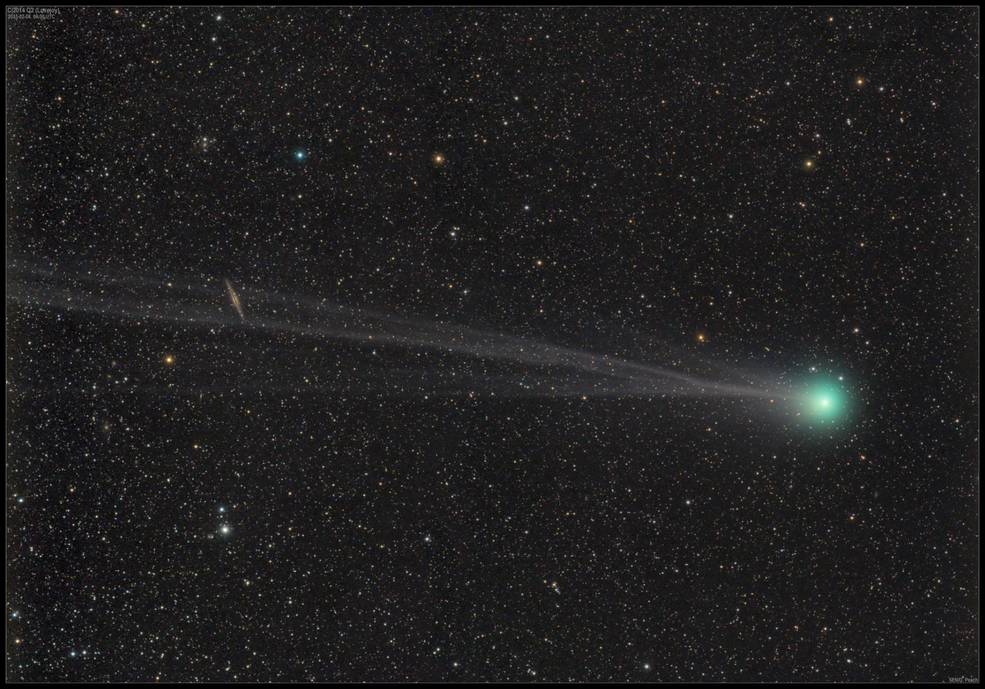 Scientists from NASA’s Goddard Center for Astrobiology observed the comet C/2014 Q2 – also called Lovejoy – and made simultaneous measurements of the output of H2O and HDO, a variant form of water. This image of Lovejoy was taken on Feb. 4, 2015 – the same day the team made their observations and just a few days after the comet passed its perihelion, or closest point to the sun.
Credits: Courtesy of Damian Peach
The team focused on Lovejoy’s water, simultaneously measuring the release of H2O along with production of a heavier form of water, HDO. Water molecules consist of two hydrogen atoms and one oxygen atom. A hydrogen atom has one proton, but when it also includes a neutron, that heavier hydrogen isotope is called deuterium, or the “D” in HDO. From these measurements, the researchers calculated the D-to-H ratio – a chemical fingerprint that provides clues about exactly where comets (or asteroids) formed within the cloud of material that surrounded the young sun in the early days of the solar system. Researchers also use the D-to-H value to try to understand how much of Earth’s water may have come from comets versus asteroids.
The scientists compared their findings from the Keck observations with another team’s observations made before the comet reached perihelion, using both space- and ground-based telescopes, and found an unexpected difference: After perihelion, the output of HDO was two to three times higher, while the output of H2O remained essentially constant. This meant that the D-to-H ratio was two to three times higher than the values reported earlier.
“The change we saw with this comet is surprising, and highlights the need for repeated measurements of D-to-H in comets at different positions in their orbits to understand all the implications,” said Lucas Paganini, a researcher with the Goddard Center for Astrobiology and lead author of the study, available online in the Astrophysical Journal Letters.
Changes in the water production are expected as comets approach the sun, but previous understanding suggested that the release of these different forms of water normally rise or fall more-or-less together, maintaining a consistent D-to-H value. The new findings suggest this may not be the case.


“If the D-to-H value changes with time, it would be misleading to assume that comets contributed only a small fraction of Earth’s water compared to asteroids,” Paganini said, “especially, if these are based on a single measurement of the D-to-H value in cometary water.”
The production of HDO in comets has historically been difficult to measure, because HDO is a much less abundant form of water. Lovejoy, for example, released on the order of 1,500 times more H2O than HDO. Lovejoy’s brightness made it possible to measure HDO when the comet passed near Earth, and the improved detectors that are being installed in some ground-based telescopes will permit similar measurements in fainter comets in the future.
The apparent change in Lovejoy’s D-to-H may be caused by the higher levels of energetic processes – such as radiation near the sun – that might have altered the characteristics of water in surface layers of the comet. In this case, a different D-to-H value might indicate that the comet has “aged” into a different stage of its lifecycle. Alternatively, prior results might have ignored possible chemical alteration occurring in the comet’s tenuous atmosphere.
“Comets can be quite active and sometimes quite dynamic, especially when they are in the inner solar system, closer to the sun,” said Michael Mumma, director of the Goddard Center for Astrobiology and a co-author of the study. “The infrared technique provides a snapshot of the comet’s output by measuring the production of H2O and HDO simultaneously. This is especially important because it eliminates many sources of systematic uncertainty.”
By Elizabeth ZubritskyNASA's Goddard Space Flight Center in Greenbelt, Md.
Editor: Karl Hille