A New Angle on Two

In celebration of the 27th anniversary of the launch of NASA's Hubble Space Telescope on April 24, 1990, astronomers used the legendary telescope to take a portrait of a stunning pair of spiral galaxies. This starry pair offers a glimpse of what our Milky Way galaxy would look like to an outside observer. 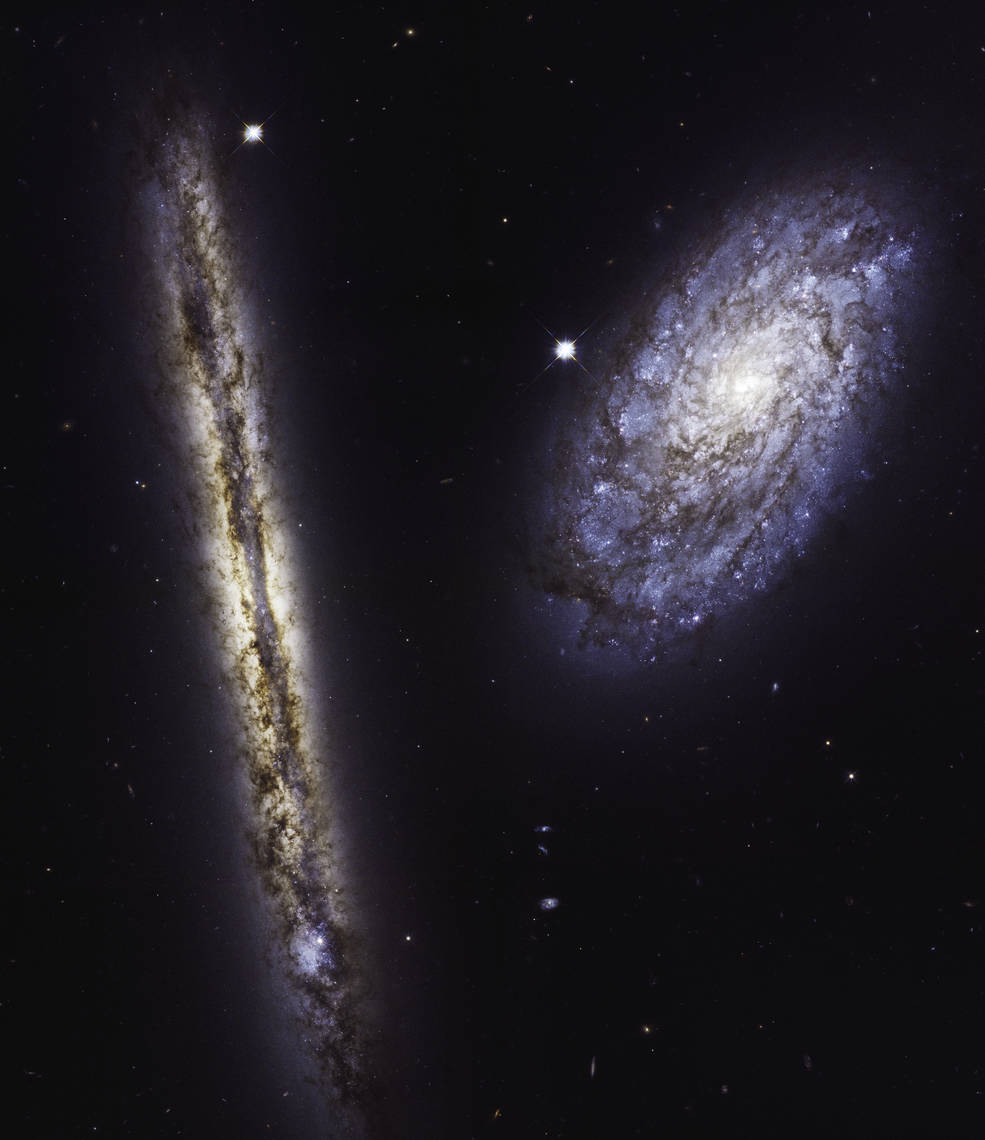 Hubble Space Telescope images of spiral galaxies NGC 4302 (left) and NGC 4298 (right) in visible and infrared light.
Credits: NASA, ESA, and M. Mutchler (STScI)
The edge-on galaxy is called NGC 4302, and the tilted galaxy is NGC 4298. These galaxies look quite different because we see them angled at different positions on the sky. They are actually very similar in terms of their structure and contents.
From our view on Earth, researchers report an inclination of 90 degrees for NGC 4302, which is exactly edge on. NGC 4298 is tilted 70 degrees.
In NGC 4298, the telltale, pinwheel-like structure is visible, but it's not as prominent as in some other spiral galaxies. In the edge-on NGC 4302, dust in the disk is silhouetted against rich lanes of stars. Absorption by dust makes the galaxy appear darker and redder than its companion. A large blue patch appears to be a giant region of recent star formation.

This animation zooms through the Virgo Cluster of nearly 2,000 galaxies into tight Hubble Space Telescope images of spiral galaxies NGC 4302 (left) and NGC 4298 (right) in visible and infrared light. Located approximately 55 million light-years away, the starry pair offers a glimpse of what our Milky Way galaxy would look like to an outside observer.
Credits: NASA, ESA, and G. Bacon, J. DePasquale, and Z. Levay (STScI) Acknowledgment: A. Fujii; Digitized Sky Survey (DSS), STScI/AURA, Palomar/Caltech, and UKSTU/AAO; B. Franke (Focal Point Observatory); and M. Mutchler (STScI)
Both galaxies are approximately 55 million light-years away. They reside in the constellation Coma Berenices in the Virgo Cluster of nearly 2,000 galaxies. Both were discovered in 1784 by astronomer William Herschel. Such objects were first simply called "spiral nebulas," because it wasn't known how far away they were. In the early 20th century, Edwin Hubble discovered that galaxies are other island cities of stars far outside our Milky Way.
A typical spiral galaxy has arms of young stars that wind outward from its center. The bright arms are regions of intense star formation. Such galaxies have a central bulge and are surrounded by a faint halo of stars. Many spiral galaxies also have bars that extend from the central bulge to the arms.
The edge-on NGC 4302 is about 87,000 light-years in diameter, which is about 60 percent the size of the Milky Way. It is about 110 billion solar masses, approximately one-tenth of the Milky Way's mass.
The tilted NGC 4298 is about 45,000 light-years in diameter, about one third the size of the Milky Way. At 17 billion solar masses, it is less than 2 percent of the Milky Way galaxy's 1 trillion solar masses.
The Hubble observations were taken between January 2 and January 22, 2017 with the Wide Field Camera 3 (WFC3) instrument in three visible light bands.
The Hubble Space Telescope was launched aboard the Space Shuttle Discovery on April 24, 1990 and deployed into low-Earth orbit the next day. From its perch high above the distorting effects of Earth's atmosphere, Hubble observes the universe in near-ultraviolet, visible, and near-infrared light. Over the past 27 years, the space telescope's breakthrough discoveries have revolutionized the fields of astronomy and astrophysics.
For more information about this galaxy pair and Hubble, visit:www.nasa.gov/hubblehttp://hubblesite.org/news_release/news/2017-14
Ann Jenkins / Ray VillardSpace Telescope Science Institute, Baltimore, Maryland410-338-4488 / 410-338-4514jenkins@stsci.edu / villard@stsci.edu
Editor: Karl Hille
Publicado por salud equitativa en 11:17