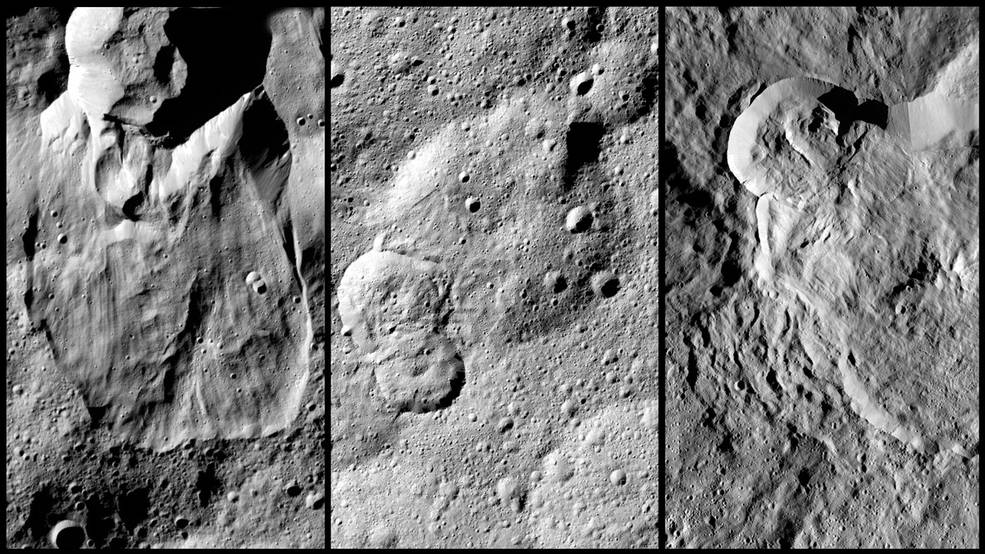 NASA's Dawn spacecraft has revealed many landslides on Ceres, which researchers interpret to have been shaped by a significant amount of water ice. Shown are examples of Type I (left), Type II (middle) and Type III (right).
Credits: NASA/JPL-Caltech/UCLA/MPS/DLR/IDA
Full image and caption
As NASA's Dawn spacecraft continues exploring Ceres, evidence mounts that the enigmatic dwarf planet retains a significant amount of water ice. A new study in the journal Nature Geoscience adds to this picture, showing how ice may have shaped the variety of landslides seen on Ceres today.
"Images from Dawn show that landslides, many of which are similar to those seen on Earth, are very common on Ceres, and further the case that Ceres has a lot of water ice involved in its structure," said Britney Schmidt, who led the study. She is an associate of the Dawn science team and assistant professor at Georgia Institute of Technology in Atlanta.
Types of Landslides
Schmidt and colleagues identified three types of landslides. Type I, which are relatively round and large, have thick "toes" at their ends. They look similar to rock glaciers and icy landslides on Earth. Type I landslides are mostly found at high latitudes on Ceres, which is also where the most ice is thought to reside just beneath the surface, suggesting they involve the most ice of any of the flow features. Three small Type 1 flows are found in Oxo Crater, a tiny bright crater in the northern hemisphere that hosts an ice deposit at the surface.
Type II features are often thinner and longer than Type I, and are the most common type of landslide on Ceres. The landslide deposits appear similar to those left behind by avalanches seen on Earth.
Ceres' Type III features may involve a brief melting of some of the ice within the soil-like regolith, causing the material to flow like mud before refreezing. These landslides are always associated with large impact craters, and may have formed when an impact event melts subsurface ice on Ceres. These features have similar appearances to ejected material from craters in the icy regions of Mars and on Jupiter's moon Ganymede.
"The locations of these different types of features reinforces the idea that the shallow subsurface of Ceres is a mixture of ice and rock, and that ice is most plentiful near the surface at the poles," Schmidt said.
Scientists were also surprised at just how many landslides have occurred on Ceres in general. About 20 to 30 percent of craters greater than 6 miles (10 kilometers) wide have some type of landslide associated with them. Such widespread "ground ice" features, which formed from of a mixture of rock and ice, had only been observed before on Earth and Mars.
Implications and Future Observations
Based on the shape and distribution of landslides on Ceres, study authors estimate that the ice in the upper few tens of meters of Ceres may range from 10 percent to 50 percent by volume.
"These kinds of flows are not seen on bodies such as Vesta, which Dawn studied from 2011 to 2012, because the regolith is devoid of water," said Carol Raymond, deputy principal investigator for the Dawn mission, based at NASA's Jet Propulsion Laboratory, Pasadena, California.
Now in its extended mission phase, Dawn is using its ion engine to swivel the plane of its orbit around Ceres to prepare for observations from a new orbit and orientation. At the end of April, the spacecraft will be directly between the sun and the mysterious Occator Crater. In this geometry, Dawn may deliver new insights about the reflective material of Ceres' most famous "bright spot," the highly reflective center of Occator that has been named Cerealia Facula.
The Dawn mission is managed by JPL for NASA's Science Mission Directorate in Washington. Dawn is a project of the directorate's Discovery Program, managed by NASA's Marshall Space Flight Center in Huntsville, Alabama. UCLA is responsible for overall Dawn mission science. Orbital ATK Inc., in Dulles, Virginia, designed and built the spacecraft. The German Aerospace Center, Max Planck Institute for Solar System Research, Italian Space Agency and Italian National Astrophysical Institute are international partners on the mission team. For a complete list of mission participants, visit:
https://dawn.jpl.nasa.gov/mission
More information about Dawn is available at the following sites:
https://www.nasa.gov/dawn
https://dawn.jpl.nasa.gov
Elizabeth LandauJet Propulsion Laboratory, Pasadena, CA818-354-6425elizabeth.landau@jpl.nasa.gov
2017-114
Editor: Tony Greicius
Publicado por salud equitativa en 11:16