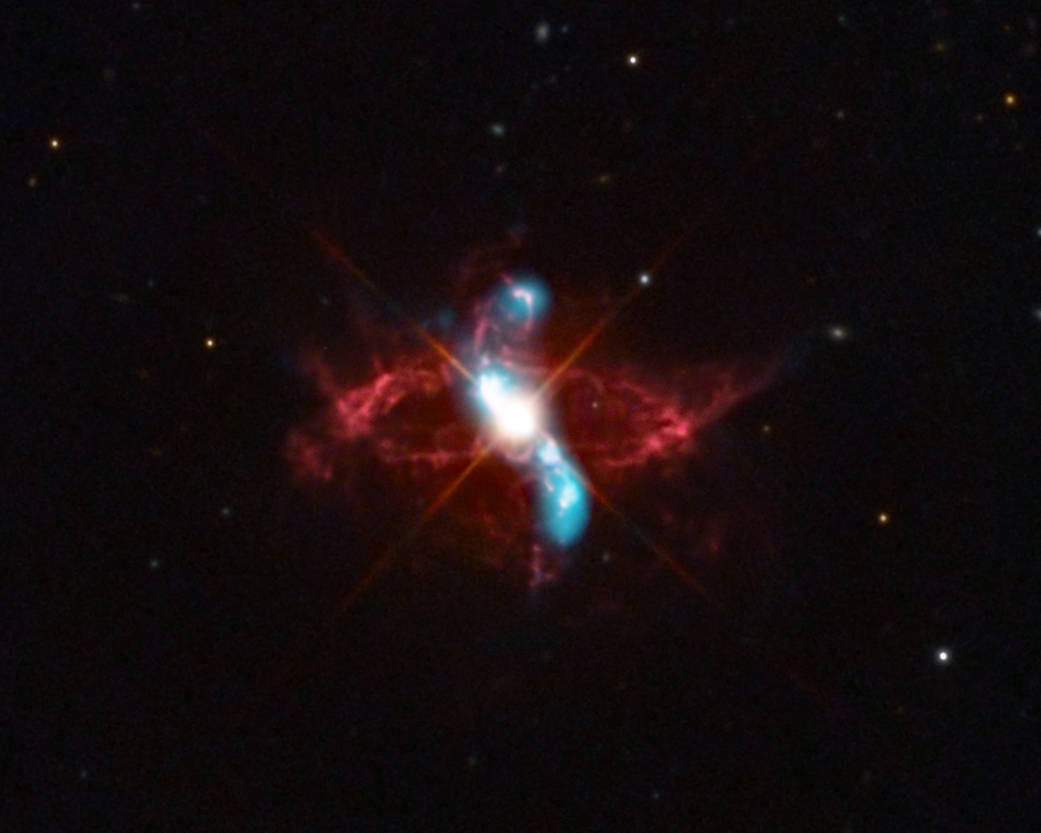 Back to Gallery
In biology, “symbiosis” refers to two organisms that live close to and interact with one another. Astronomers have long studied a class of stars – called symbiotic stars – that co-exist in a similar way. Using data from NASA’s Chandra X-ray Observatory and other telescopes, astronomers are gaining a better understanding of how volatile this close stellar relationship can be.R Aquarii (R Aqr, for short) is one of the best known of the symbiotic stars. Located at a distance of about 710 light years from Earth, its changes in brightness were first noticed with the naked eye almost a thousand years ago. Since then, astronomers have studied this object and determined that R Aqr is not one star, but two: a small, dense white dwarf and a cool red, giant star.The red giant star has its own interesting properties. In billions of years, our Sun will turn into a red giant once it exhausts the hydrogen nuclear fuel in its core and begins to expand and cool. Most red giants are placid and calm, but some pulsate with periods between 80 and 1,000 days like the star Mira and undergo large changes in brightness. This subset of red giants is called “Mira variables.”The red giant in R Aqr is a Mira variable and undergoes steady changes in brightness by a factor of 250 as it pulsates, unlike its white dwarf companion that does not pulsate. There are other striking differences between the two stars. The white dwarf is about ten thousand times brighter than the red giant. The white dwarf has a surface temperature of some 20,000 K while the Mira variable has a temperature of about 3,000 K. In addition, the white dwarf is slightly less massive than its companion but because it is much more compact, its gravitational field is stronger. The gravitational force of the white dwarf pulls away the sloughing outer layers of the Mira variable toward the white dwarf and onto its surface.Occasionally, enough material will accumulate on the surface of the white dwarf to trigger thermonuclear fusion of hydrogen.  The release of energy from this process can produce a nova, an asymmetric explosion that blows off the outer layers of the star at velocities of ten million miles per hour or more, pumping energy and material into space. An outer ring of material provides clues to this history of eruptions.  Scientists think a nova explosion in the year 1073 produced this ring. Evidence for this explosion comes from optical telescope data, from Korean records of a “guest” star at the position of R Aqr in 1073 and information from Antarctic ice cores. An inner ring was generated by an eruption in the early 1770s. Optical data (red) in a new composite image of R Aqr shows the inner ring. The outer ring is about twice as wide as the inner ring, but is too faint to be visible in this image.Since shortly after Chandra launched in 1999, astronomers began using the X-ray telescope to monitor the behavior of R Aqr, giving them a better understanding of the behavior of R Aqr in more recent years. Chandra data (blue) in this composite reveal a jet of X-ray emission that extends to the upper left. The X-rays have likely been generated by shock waves, similar to sonic booms around supersonic planes, caused by the jet striking surrounding material.As astronomers have made observations of R Aqr with Chandra over the years, in 2000, 2003, and 2005, they have seen changes in this jet. Specifically, blobs of X-ray emission are moving away from the stellar pair at speeds of about 1.4 million and 1.9 million miles per hour. Despite travelling at a slower speed than the material ejected by the nova, the jets encounter little material and do not slow down much. On the other hand, matter from the nova sweeps up a lot more material and slows down significantly, explaining why the rings are not much larger than the jets.Using the distances of the blobs from the binary, and assuming that the speeds have remained constant, a team of scientists from the Harvard-Smithsonian Center for Astrophysics (CfA) in Cambridge, Mass, estimated that eruptions in the 1950s and 1980s produced the blobs. These eruptions were less energetic and not as bright as the nova explosion in 1073. In 2007 a team led by Joy Nichols from CfA reported the possible detection of a new jet in R Aqr using the Chandra data. This implies that another eruption occurred in the early 2000s. If these less powerful and poorly understood events repeat about every few decades, the next one is due within the next 10 years.Some binary star systems containing white dwarfs have been observed to produce nova explosions at regular intervals. If R Aqr is one of these recurrent novas, and the spacing between the 1073 and 1773 events repeats itself, the next nova explosion should not occur again until the 2470s. During such an event the system may become several hundred times brighter, making it easily visible to the naked eye, and placing it among the several dozen brightest stars. Close monitoring of this stellar couple will be important for trying to understand the nature of their volatile relationship.Rodolfo (“Rudy”) Montez of the Harvard-Smithsonian Center for Astrophysics (CfA) in Cambridge, Mass, presented these results at the 230th meeting of the American Astronomical Society in Austin, TX.  His co-authors are Margarita Karovska, Joy Nichols, and Vinay Kashyap, all from CfA.NASA’s Marshall Space Flight Center in Huntsville, Alabama, manages the Chandra program for NASA’s Science Mission Directorate in Washington. The Smithsonian Astrophysical Observatory in Cambridge, Massachusetts, controls Chandra’s science and flight operations.Image credit: X-ray: NASA/CXC/SAO/R. Montez et al.; Optical: Adam Block/Mt. Lemmon SkyCenter/U. Arizona
Read More from NASA's Chandra X-ray Observatory.
For more Chandra images, multimedia and related materials, visit:
http://www.nasa.gov/chandra
Editor: Lee Mohon
Publicado por salud equitativa en 13:46