Boosted by natural magnifying lenses in space, NASA's Hubble Space Telescope has captured unique close-up views of the universe's brightest infrared galaxies, which are as much as 10,000 times more luminous than our Milky Way.
The galaxy images, magnified through a phenomenon called gravitational lensing, reveal a tangled web of misshapen objects punctuated by exotic patterns such as rings and arcs. The odd shapes are due largely to the foreground lensing galaxies' powerful gravity distorting the images of the background galaxies. The unusual forms also may have been produced by spectacular collisions between distant, massive galaxies in a sort of cosmic demolition derby. 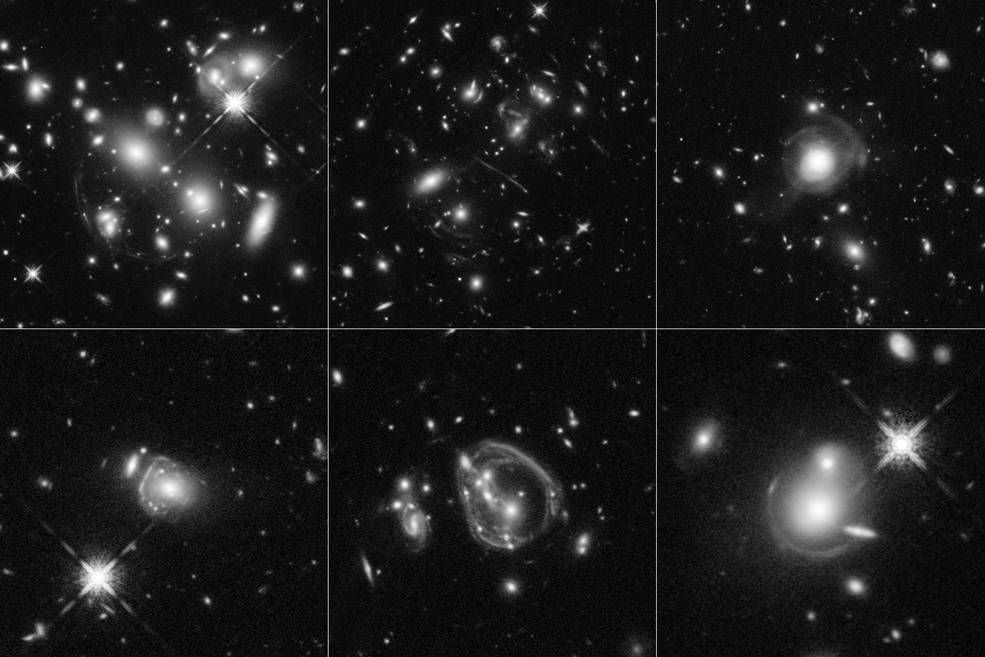 These six Hubble Space Telescope images reveal a jumble of misshapen-looking galaxies punctuated by exotic patterns such as arcs, streaks, and smeared rings. These unusual features are the stretched shapes of the universe's brightest infrared galaxies that are boosted by natural cosmic magnifying lenses. Some of the oddball shapes also may have been produced by spectacular collisions between distant, massive galaxies. The faraway galaxies are as much as 10,000 times more luminous than our Milky Way. The galaxies existed between 8 billion and 11.5 billion years ago.
Credits: NASA, ESA, and J. Lowenthal (Smith College)
"We have hit the jackpot of gravitational lenses," said lead researcher James Lowenthal of Smith College in Northampton, Massachusetts. "These ultra-luminous, massive, starburst galaxies are very rare. Gravitational lensing magnifies them so that you can see small details that otherwise are unimaginable. We can see features as small as about 100 light-years or less across. We want to understand what's powering these monsters, and gravitational lensing allows us to study them in greater detail."

Got a stellar Hubble image on a T-shirt? Or maybe you’ve spotted a Hubble tattoo! Share your photos on Instagram, Twitter, Flickr and Facebook with #SpotHubble and maybe you’ll get a shout-out from @NASAHubble!
Credits: NASA's Goddard Space Flight Center/Jenny Hottle
Learn More about #SpotHubble
The galaxies are ablaze with runaway star formation, pumping out more than 10,000 new stars a year. This unusually rapid star birth is occurring at the peak of the universe's star-making boom more than 8 billion years ago. The star-birth frenzy creates lots of dust, which enshrouds the galaxies, making them too faint to detect in visible light. But they glow fiercely in infrared light, shining with the brilliance of 10 trillion to 100 trillion suns.
Gravitational lenses occur when the intense gravity of a massive galaxy or cluster of galaxies magnifies the light of fainter, more distant background sources. Previous observations of the galaxies, discovered in far-infrared light by ground- and space-based observatories, had hinted of gravitational lensing. But Hubble's keen vision confirmed the researchers' suspicion.
Lowenthal is presenting his results at 3:15 p.m. (EDT), June 6, at the American Astronomical Society meeting in Austin, Texas.
According to the research team, only a few dozen of these bright infrared galaxies exist in the universe, scattered across the sky. They reside in unusually dense regions of space that somehow triggered rapid star formation in the early universe.
The galaxies may hold clues to how galaxies formed billions of years ago. "There are so many unknowns about star and galaxy formation," Lowenthal explained. "We need to understand the extreme cases, such as these galaxies, as well as the average cases, like our Milky Way, in order to have a complete story about how galaxy and star formation happen."
In studying these strange galaxies, astronomers first must detangle the foreground lensing galaxies from the background ultra-bright galaxies. Seeing this effect is like looking at objects at the bottom of a swimming pool. The water distorts your view, just as the lensing galaxies' gravity stretches the shapes of the distant galaxies. "We need to understand the nature and scale of those lensing effects to interpret properly what we're seeing in the distant, early universe," Lowenthal said. "This applies not only to these brightest infrared galaxies, but probably to most or maybe even all distant galaxies."
Lowenthal's team is halfway through its Hubble survey of 22 galaxies. An international team of astronomers first discovered the galaxies in far-infrared light using survey data from the European Space Agency's (ESA) Planck space observatory, and some clever sleuthing. The team then compared those sources to galaxies found in ESA's Herschel Space Observatory's catalog of far-infrared objects and to ground-based radio data taken by the Very Large Array in New Mexico. The researchers next used the Large Millimeter Telescope (LMT) in Mexico to measure their exact distances from Earth. The LMT's far-infrared images also revealed multiple objects, hinting that the galaxies were being gravitationally lensed.
These bright objects existed between 8 billion and 11.5 billion years ago, when the universe was making stars more vigorously than it is today. The galaxies' star-birth production is 5,000 to 10,000 times higher than that of our Milky Way. However, the ultra-bright galaxies are pumping out stars using only the same amount of gas contained in the Milky Way.
So, the nagging question is, what is powering the prodigious star birth? "We've known for two decades that some of the most luminous galaxies in the universe are very dusty and massive, and they're undergoing bursts of star formation," Lowenthal said. "But they've been very hard to study because the dust makes them practically impossible to observe in visible light. They're also very rare: they don't appear in any of Hubble's deep-field surveys. They are in random parts of the sky that nobody's looked at before in detail. That's why finding that they are gravitationally lensed is so important."
These galaxies may be the brighter, more distant cousins of the ultra-luminous infrared galaxies (ULIRGS), hefty, dust-cocooned, starburst galaxies, seen in the nearby universe. The ULIRGS' star-making output is stoked by the merger of two spiral galaxies, which is one possibility for the stellar baby boom in their more-distant relatives. However, Lowenthal said that computer simulations of the birth and growth of galaxies show that major mergers occur at a later epoch than the one in which these galaxies are seen.
Another idea for the star-making surge is that lots of gas, the material that makes stars, is flooding into the faraway galaxies. "The early universe was denser, so maybe gas is raining down on the galaxies, or they are fed by some sort of channel or conduit, which we have not figured out yet," Lowenthal said. "This is what theoreticians struggle with: How do you get all the gas into a galaxy fast enough to make it happen?"
The research team plans to use Hubble and the Gemini Observatory in Hawaii to try to distinguish between the foreground and background galaxies so they can begin to analyze the details of the brilliant monster galaxies.
Future telescopes, such as NASA's James Webb Space Telescope, an infrared observatory scheduled to launch in 2018, will measure the speed of the galaxies' stars so that astronomers can calculate the mass of these ultra-luminous objects.
"The sky is covered with all kinds of galaxies, including those that shine in far-infrared light," Lowenthal said. "What we're seeing here is the tip of the iceberg: the very brightest of all."
The Hubble Space Telescope is a project of international cooperation between NASA and ESA (European Space Agency). NASA's Goddard Space Flight Center in Greenbelt, Maryland, manages the telescope. The Space Telescope Science Institute (STScI) in Baltimore conducts Hubble science operations. STScI is operated for NASA by the Association of Universities for Research in Astronomy, Inc., in Washington, D.C.
For more information and additional images, visit: http://hubblesite.org/news_release/news/2017-24
For NASA's Hubble webpage, visit:
www.nasa.gov/hubble
Donna Weaver / Ray VillardSpace Telescope Science Institute, Baltimore, Maryland410-338-4493 / 410-338-4514dweaver@stsci.edu / villard@stsci.edu
James LowenthalSmith College, Northampton, Massachusetts413-585-6995jlowenth@smith.edu
Editor: Karl Hille
Publicado por salud equitativa en 13:45