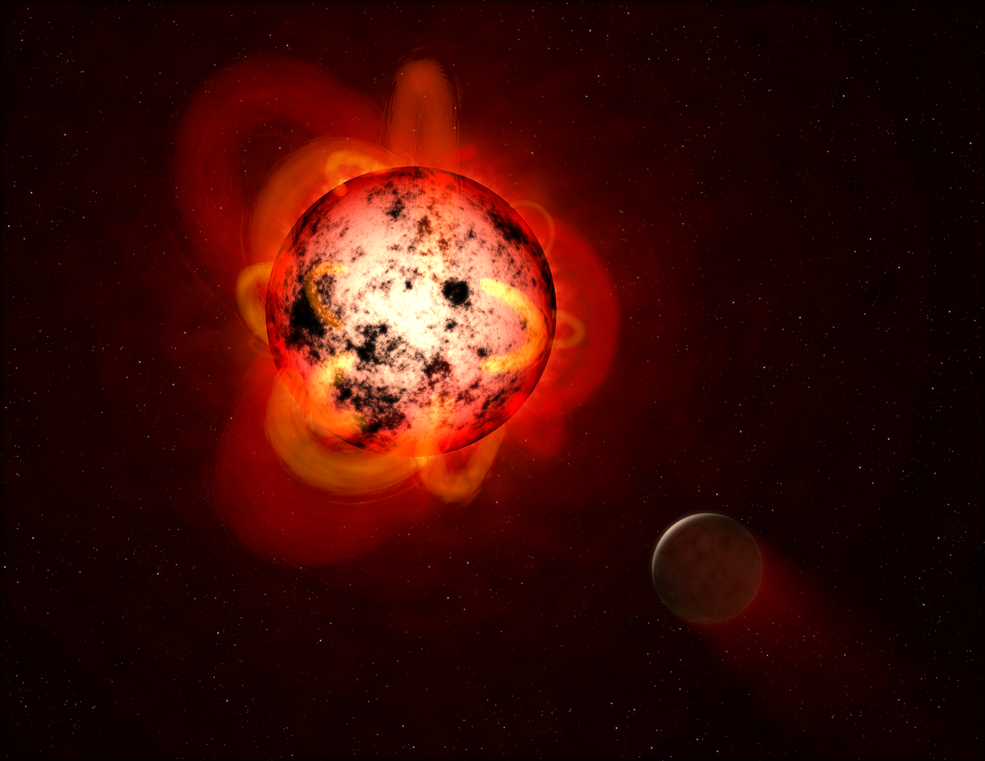 This illustration shows a red dwarf star orbited by a hypothetical exoplanet.
Credits: NASA/ESA/G. Bacon (STScI)
Full image and caption
Cool dwarf stars are hot targets for exoplanet hunting right now. The discoveries of planets in the habitable zones of the TRAPPIST-1 and LHS 1140 systems, for example, suggest that Earth-sized worlds might circle billions of red dwarf stars, the most common type of star in our galaxy. But, like our own sun, many of these stars erupt with intense flares. Are red dwarfs really as friendly to life as they appear, or do these flares make the surfaces of any orbiting planets inhospitable?
To address this question, a team of scientists has combed 10 years of ultraviolet observations by NASA's Galaxy Evolution Explorer (GALEX) spacecraft looking for rapid increases in the brightness of stars due to flares. Flares emit radiation across a wide swath of wavelengths, with a significant fraction of their total energy released in the ultraviolet bands where GALEX observed. At the same time, the red dwarfs from which the flares arise are relatively dim in ultraviolet. This contrast, combined with the GALEX detectors' sensitivity to fast changes, allowed the team to measure events with less total energy than many previously detected flares. This is important because, although individually less energetic and therefore less hostile to life, smaller flares might be much more frequent and add up over time to create an inhospitable environment.
“What if planets are constantly bathed by these smaller, but still significant, flares?” asked Scott Fleming of the Space Telescope Science Institute (STScI) in Baltimore. “There could be a cumulative effect.”
To detect and accurately measure these flares, the team had to analyze data over very short time intervals. From images with exposure times of nearly half an hour, the team was able to reveal stellar variations lasting just seconds.
First author Chase Million of Million Concepts in State College, Pennsylvania, led a project called gPhoton that reprocessed more than 100 terabytes of GALEX data held at the Mikulski Archive for Space Telescopes (MAST), located at the Space Telescope Science Institute. The team then used custom software developed by Million and Clara Brasseur, also at the institute, to search several hundred red dwarf stars, and they detected dozens of flares.
“We have found dwarf star flares in the whole range that we expected GALEX to be sensitive to, from itty bitty baby flares that last a few seconds, to monster flares that make a star hundreds of times brighter for a few minutes,” said Million.
The flares GALEX detected are similar in strength to flares produced by our own sun. However, because a planet would have to orbit much closer to a cool, red dwarf star to maintain a temperature friendly to life as we know it, such planets would be subjected to more of a flare’s energy than Earth.
Large flares can strip away a planet’s atmosphere. Strong ultraviolet light from flares that penetrates to a planet’s surface could damage organisms or prevent life from arising.
Currently, team members Rachel Osten and Brasseur are examining stars observed by both the GALEX and Kepler missions to look for similar flares. The team expects to eventually find hundreds of thousands of flares hidden in the GALEX data.
"These results show the value of a survey mission like GALEX, which was instigated to study the evolution of galaxies across cosmic time and is now having an impact on the study of nearby habitable planets," said Don Neill, research scientist at Caltech in Pasadena, who was part of the GALEX collaboration. "We did not anticipate that GALEX would be used for exoplanets when the mission was designed."
New and powerful instruments like NASA's James Webb Space Telescope, scheduled for launch in 2018, ultimately will be needed to study atmospheres of planets orbiting nearby red dwarf stars and search for signs of life. But as researchers pose new questions about the cosmos, archives of data from past projects and missions, like those held at MAST, continue to produce exciting new scientific results.
These results were presented in a news conference at a meeting of the American Astronomical Society in Austin, Texas.
The GALEX mission, which ended in 2013 after more than a decade of scanning the skies in ultraviolet light, was led by scientists at Caltech. NASA's Jet Propulsion Laboratory, also in Pasadena, managed the mission and built the science instrument. JPL is managed by Caltech for NASA.
STScI conducts Hubble Space Telescope science operations and is the mission and science operations center for the James Webb Space Telescope. STScI is operated for NASA by the Association of Universities for Research in Astronomy in Washington.
For more information about exoplanets, visit:
https://exoplanets.nasa.gov
Elizabeth LandauJet Propulsion Laboratory, Pasadena, California818-354-6425elizabeth.landau@jpl.nasa.gov
Christine Pulliam / Ray VillardSpace Telescope Science Institute, Baltimore, Maryland410-338-4366 / 410-338-4514cpulliam@stsci.edu / villard@stsci.edu
Chase MillionMillion Concepts, State College, Pennsylvania765-914-5336chase.million@gmail.com
Written by Christine Pulliam
2017-161
Editor: Tony Greicius
Publicado por salud equitativa en 13:43