Develop a New Use

Astronomers have used the sharp vision of NASA’s Hubble Space Telescope to repeat a century-old test of Einstein’s general theory of relativity. The Hubble team measured the mass of a white dwarf, the burned-out remnant of a normal star, by seeing how much it deflects the light from a background star.
This observation represents the first time Hubble has witnessed this type of effect created by a star. The data provide a solid estimate of the white dwarf’s mass and yield insights into theories of the structure and composition of the burned-out star. 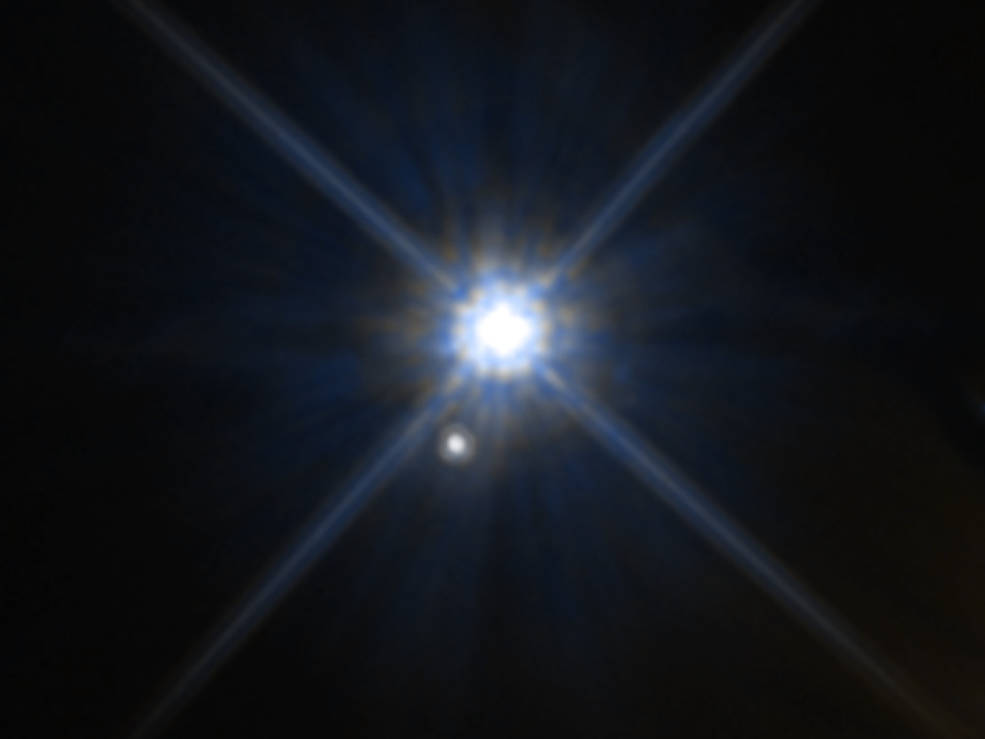 Looks can be deceiving. In this Hubble Space Telescope image, the white dwarf star Stein 2051B and the smaller star below it appear to be close neighbors. The stars, however, reside far away from each other. Stein 2051B is 17 light-years from Earth; the other star is about 5,000 light-years away. Stein 2051B is named for its discoverer, Dutch Roman Catholic priest and astronomer Johan Stein.
Credits: NASA, ESA, and K. Sahu (STScI)
First proposed in 1915, Einstein’s general relativity theory describes how massive objects warp space, which we feel as gravity. The theory was experimentally verified four years later when a team led by British astronomer Sir Arthur Eddington measured how much the sun’s gravity deflected the image of a background star as its light grazed the sun during a solar eclipse, an effect called gravitational microlensing.
Astronomers can use this effect to see magnified images of distant galaxies or, at closer range, to measure tiny shifts in a star’s apparent position on the sky. Researchers had to wait a century, however, to build telescopes powerful enough to detect this gravitational warping phenomenon caused by a star outside our solar system. The amount of deflection is so small only the sharpness of Hubble could measure it. 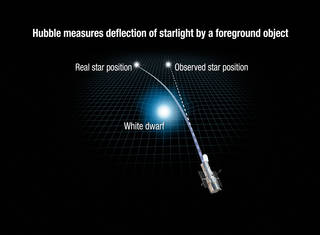 This illustration reveals how the gravity of a white dwarf star warps space and bends the light of a distant star behind it. The Hubble Space Telescope captured images of the dead star, called Stein 2051B, as it passed in front of a background star. During the close alignment, Stein 2051B deflected the starlight, which appeared offset by about 2 milliarcseconds from its actual position.
Credits: NASA, ESA, and A. Feild (STScI)
Hubble observed the nearby white dwarf star Stein 2051B as it passed in front of a background star. During the close alignment, the white dwarf’s gravity bent the light from the distant star, making it appear offset by about 2 milliarcseconds from its actual position. This deviation is so small that it is equivalent to observing an ant crawl across the surface of a quarter from 1,500 miles away.
Using the deflection measurement, the Hubble astronomers calculated that the white dwarf’s mass is roughly 68 percent of the sun’s mass. This result matches theoretical predictions.
The technique opens a window on a new method to determine a star’s mass. Normally, if a star has a companion, astronomers can determine its mass by measuring the double-star system’s orbital motion. Although Stein 2051B has a companion, a bright red dwarf, astronomers cannot accurately measure its mass because the stars are too far apart. The stars are at least 5 billion miles apart – almost twice Pluto’s present distance from the sun.
“This microlensing method is a very independent and direct way to determine the mass of a star,” explained lead researcher Kailash Sahu of the Space Telescope Science Institute (STScI) in Baltimore, Maryland. “It’s like placing the star on a scale: the deflection is analogous to the movement of the needle on the scale.”
Sahu will present his team’s findings at 11:15 a.m. (EDT), June 7, at the American Astronomical Society meeting in Austin, Texas.
The Hubble analysis also helped the astronomers to independently verify the theory of how a white dwarf’s radius is determined by its mass, an idea first proposed in 1935 by Indian American astronomer Subrahmanyan Chandrasekhar. “Our measurement is a nice confirmation of white-dwarf theory, and it even tells us the internal composition of a white dwarf,” said team member Howard Bond of Pennsylvania State University in University Park.
Sahu’s team identified Stein 2051B and its background star after combing through data of more than 5,000 stars in a catalog of nearby stars that appear to move quickly across the sky. Stars with a higher apparent motion across the sky have a greater chance of passing in front of a distant background star, where the deflection of light can be measured.
After identifying Stein 2051B and mapping the background star field, the researchers used Hubble’s Wide Field Camera 3 to observe the white dwarf seven different times over a two-year period as it moved past the selected background star.
The Hubble observations were challenging and time-consuming. The research team had to analyze the white dwarf’s velocity and the direction it was moving in order to predict when it would arrive at a position to bend the starlight so the astronomers could observe the phenomenon with Hubble.
The astronomers also had to measure the tiny amount of deflected starlight. “Stein 2051B appears 400 times brighter than the distant background star,” said team member Jay Anderson of STScI, who led the analysis to precisely measure the positions of stars in the Hubble images. “So measuring the extremely small deflection is like trying to see a firefly move next to a light bulb. The movement of the insect is very small, and the glow of the light bulb makes it difficult to see the insect moving.” In fact, the slight movement is about 1,000 times smaller than the measurement made by Eddington in his 1919 experiment.
Stein 2051B is named for its discoverer, Dutch Roman Catholic priest and astronomer Johan Stein. It resides 17 light-years from Earth and is estimated to be about 2.7 billion years old. The background star is about 5,000 light-years away.
The researchers plan to use Hubble to conduct a similar microlensing study with Proxima Centauri, our solar system’s closest stellar neighbor.
The team’s result will appear in the journal Science on June 9.
The Hubble Space Telescope is a project of international cooperation between NASA and ESA (European Space Agency). NASA’s Goddard Space Flight Center in Greenbelt, Maryland, manages the telescope. The Space Telescope Science Institute (STScI) in Baltimore conducts Hubble science operations. STScI is operated for NASA by the Association of Universities for Research in Astronomy, Inc., in Washington, D.C.
For more information about the Hubble Space Telescope, visit:
www.nasa.gov/hubble
Donna Weaver / Ray VillardSpace Telescope Science Institute, Baltimore, Maryland410-338-4493 / 410-338-4514dweaver@stsci.edu / villard@stsci.edu
Kailash SahuSpace Telescope Science Institute, Baltimore, Maryland410-338-4930ksahu@stsci.edu
Editor: Karl Hille
Publicado por salud equitativa en 8:06