Small Asteroid or Comet 'Visits' from Beyond the Solar System | NASA

Small Asteroid or Comet 'Visits' from Beyond the Solar System | NASA

'Visits' from Beyond the

This animation shows the path of A/2017 U1, which is an asteroid -- or perhaps a comet -- as it passed through our inner solar system in September and October 2017. From analysis of its motion, scientists calculate that it probably originated from outside of our solar system.
Credits: NASA/JPL-Caltech
A small, recently discovered asteroid -- or perhaps a comet -- appears to have originated from outside the solar system, coming from somewhere else in our galaxy. If so, it would be the first "interstellar object" to be observed and confirmed by astronomers.
This unusual object – for now designated A/2017 U1 – is less than a quarter-mile (400 meters) in diameter and is moving remarkably fast. Astronomers are urgently working to point telescopes around the world and in space at this notable object. Once these data are obtained and analyzed, astronomers may know more about the origin and possibly composition of the object.
A/2017 U1 was discovered Oct. 19 by the University of Hawaii's Pan-STARRS 1 telescope on Haleakala, Hawaii, during the course of its nightly search for near-Earth objects for NASA. Rob Weryk, a postdoctoral researcher at the University of Hawaii Institute for Astronomy (IfA), was first to identify the moving object and submit it to the Minor Planet Center. Weryk subsequently searched the Pan-STARRS image archive and found it also was in images taken the previous night, but was not initially identified by the moving object processing.
Did you ever wonder how NASA spots asteroids that maybe getting too close to Earth for comfort? Watch and learn. Find out more about NASA finds, studies and tracks near-Earth objects by visiting https://www.nasa.gov/planetarydefense .
Weryk immediately realized this was an unusual object. "Its motion could not be explained using either a normal solar system asteroid or comet orbit," he said. Weryk contacted IfA graduate Marco Micheli, who had the same realization using his own follow-up images taken at the European Space Agency's telescope on Tenerife in the Canary Islands. But with the combined data, everything made sense. Said Weryk, "This object came from outside our solar system."
"This is the most extreme orbit I have ever seen," said Davide Farnocchia, a scientist at NASA's Center for Near-Earth Object Studies (CNEOS) at the agency's Jet Propulsion Laboratory in Pasadena, California. "It is going extremely fast and on such a trajectory that we can say with confidence that this object is on its way out of the solar system and not coming back."
The CNEOS team plotted the object's current trajectory and even looked into its future. A/2017 U1 came from the direction of the constellation Lyra, cruising through interstellar space at a brisk clip of 15.8 miles (25.5 kilometers) per second. 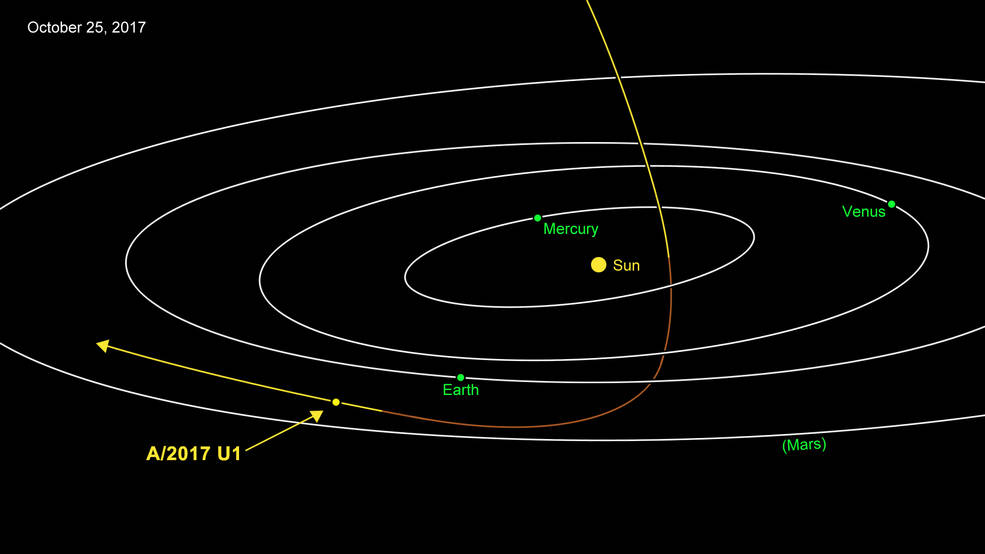 A/2017 U1 is most likely of interstellar origin. Approaching from above, it was closest to the Sun on Sept. 9. Traveling at 27 miles per second (44 kilometers per second), the comet is headed away from the Earth and Sun on its way out of the solar system.
Credits: NASA/JPL-Caltech
The object approached our solar system from almost directly "above" the ecliptic, the approximate plane in space where the planets and most asteroids orbit the Sun, so it did not have any close encounters with the eight major planets during its plunge toward the Sun. On Sept. 2, the small body crossed under the ecliptic plane just inside of Mercury's orbit and then made its closest approach to the Sun on Sept. 9. Pulled by the Sun's gravity, the object made a hairpin turn under our solar system, passing under Earth's orbit on Oct. 14 at a distance of about 15 million miles (24 million kilometers) -- about 60 times the distance to the Moon. It has now shot back up above the plane of the planets and, travelling at 27 miles per second (44 kilometers per second) with respect to the Sun, the object is speeding toward the constellation Pegasus.
"We have long suspected that these objects should exist, because during the process of planet formation a lot of material should be ejected from planetary systems. What's most surprising is that we've never seen interstellar objects pass through before," said Karen Meech, an astronomer at the IfA specializing in small bodies and their connection to solar system formation.
The small body has been assigned the temporary designation A/2017 U1 by the Minor Planet Center (MPC) in Cambridge, Massachusetts, where all observations on small bodies in our solar system -- and now those just passing through -- are collected. Said MPC Director Matt Holman, "This kind of discovery demonstrates the great scientific value of continual wide-field surveys of the sky, coupled with intensive follow-up observations, to find things we wouldn't otherwise know are there."
Since this is the first object of its type ever discovered, rules for naming this type of object will need to be established by the International Astronomical Union.
"We have been waiting for this day for decades," said CNEOS Manager Paul Chodas. "It's long been theorized that such objects exist -- asteroids or comets moving around between the stars and occasionally passing through our solar system -- but this is the first such detection. So far, everything indicates this is likely an interstellar object, but more data would help to confirm it."
The Panoramic Survey Telescope and Rapid Response System (Pan-STARRS) is a wide-field survey observatory operated by the University of Hawaii Institute for Astronomy. The Minor Planet Center is hosted by the Harvard-Smithsonian Center for Astrophysics and is a sub-node of NASA's Planetary Data System Small Bodies Node at the University of Maryland (http://www.minorplanetcenter.net/ ). JPL hosts the Center for Near-Earth Object Studies (CNEOS). All are projects of NASA's Near-Earth Object Observations Program, and elements of the agency's Planetary Defense Coordination Office within NASA's Science Mission Directorate.
More information about asteroids and near-Earth objects can be found at:
https://cneos.jpl.nasa.gov
https://www.jpl.nasa.gov/asteroidwatch
For more information about NASA's Planetary Defense Coordination Office, visit:
https://www.nasa.gov/planetarydefense
For asteroid and comet news and updates, follow AsteroidWatch on Twitter:
twitter.com/AsteroidWatch
DC AgleJet Propulsion Laboratory, Pasadena, Calif.818-393-9011agle@jpl.nasa.gov Laurie Cantillo / Dwayne BrownNASA Headquarters, Washington202-358-1077 / 202-358-1726laura.l.cantillo@nasa.gov / dwayne.c.brown@nasa.gov
Roy GalUniversity of Hawaii, Institute for Astronomy301-728-8637roygal@hawaii.edu
2017-278
Editor: Tony Greicius
Publicado por salud equitativa en 10:17