Australian student and journalist Eden Gillespie has a lament that may sound familiar to those who, like her, have swapped countries: where have all my old friendships gone? 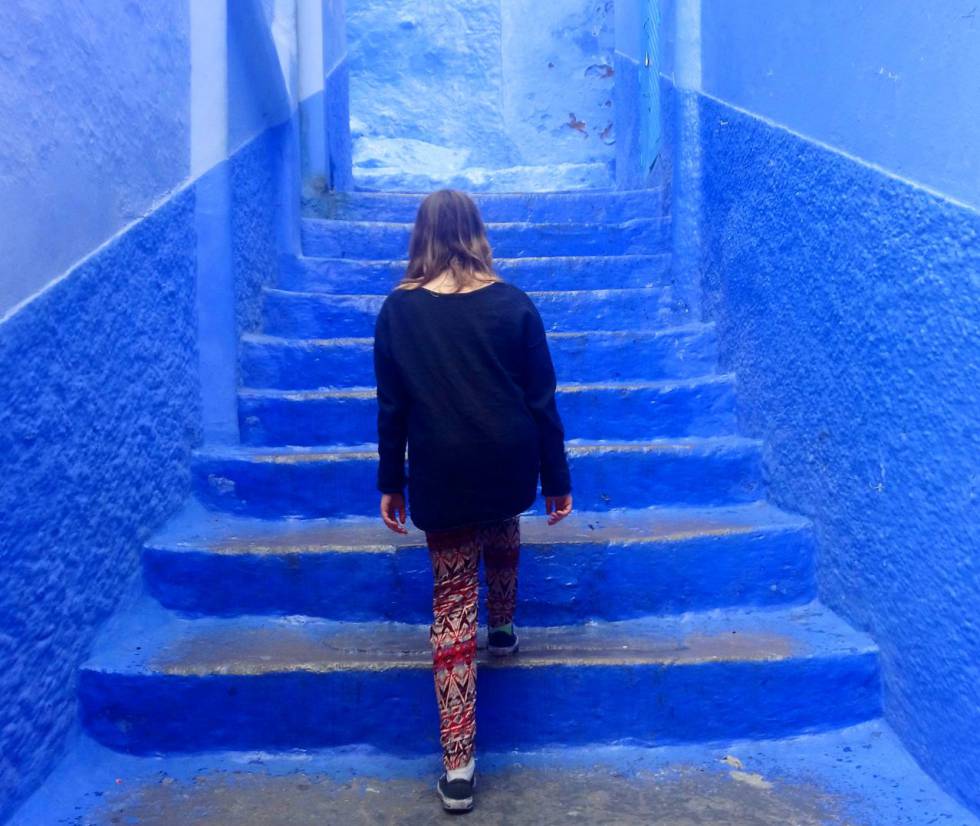 Feeling blue: Eden on a recent trip to Morocco.
EDEN GILLESPIE
3 ABR 2018 - 11:10 ART
In the weeks leading up to my move to Spain, there were handwritten letters, meaningful photo collages posted to Instagram and a buzz of kind words poured over coffees, lunches and dinners. My friends said they were jealous I’d be soaking up a Spanish summer, drinking tinto de verano and carousing around Europe while they’d be stuck in the same old routine.
“Promise me you won’t get homesick,” my older sister said to me. “Everything will be exactly the same when you’re back. Nothing will have changed.” She’d know – at just 31 years old she’s traveled to 69 countries. Even after years working on cruise ships, she marks every day of leave with a spectacular vacation. As I write this, she’s packing for a trip to Peru.

Despite my sister’s well-meaning advice, eight months on, I’ve grown tired of seeing my messages left on “read.” The onus is on me to maintain one-sided friendships that I’m not even sure are worth the effort.
There’s currently a record number of expats working and studying abroad. I’m one of the estimated one million Australians caught up in this diaspora, living overseas. Buckled in for a 24-hour flight from Sydney, I had no idea of all the uncomfortable interactions that stretched out ahead. But I also believed that this settling-in period would be softened by friends back home taking an interest in how I was adjusting.
It’s been frustrating, at times, not being able to express myself in Spanish, bumbling through conversations and being misunderstood. Adjusting to cultural differences as well as 3pm lunches and 10.30pm dinners characterized this grunt period. It was during this time that one of my closest friends ghosted me with a five-month streak of silence. A full-time university student living, at most, 500 meters from her classes, she says she was “too busy” to keep in touch. But that little green dot flashing next to her name sent a different message. That she was “active now,” and once out of sight, I was out of mind.

Being busy isn’t a foreign concept for me. I wasn’t expecting daily contact, just a message once in a while

“It’s hard to give every friend my fullest undivided attention when I need to give myself that attention too,” she messaged me. As an exchange student who’s also traveling and working, being busy isn’t a foreign concept for me. I wasn’t expecting daily contact, just a message once in a while. To this my friend replied she wasn’t cutting me out of her “care circle, just prioritizing it”.
With working overseas now commonplace, stories like mine are frequent among expats. Erin Cook is an Australian journalist living in Jakarta. Like me, she’s had plenty of friendships break down after moving abroad.
“I think it’s the losing touch, or at least being much less in touch, with my very closest friends that is genuinely upsetting,” Erin says.
“When I first moved I tried to ‘test’ some friends but I just never heard from them again. So now I’m a lot more active in keeping up contact,” she says.
Erin says that while she “definitely minds” being forgotten by some friends, without making the effort, communication often drops off completely. She’s forced to initiate conversations or risk drifting away from these friends.

When I fly back over Sydney Harbour it’ll look the same as when I left. But within me, so much has changed

While it might seem a self-sabotaging act to quit messaging friends who don’t respond, I’ve been grateful for those who’ve sent the first message. One of my friends was planning her wedding while volunteering and finishing her final semester of university. Stretched for time, she’d often send through photos of her cats and even mailed me a wedding invite telling me I’d be “there in spirit.”
Another friend who is on a student exchange in Canada has also kept me updated while half-freezing-to-death in -25ºC snow storms. He’s never been “too busy” to type out a few sentences.
Sadly, in these past few months some former friends have transformed into strangers. It feels strange to think about bringing them back into the loop after a year without contact. When I fly back over Sydney Harbour in May it’ll look the same as it did when I left. But within me, so much has changed. I feel, despite appearances, unrecognizable.
But one thing stays the same. A question I’ve contemplated many times over the past few months. How hard is it to make a damn phone call?
Twitter: @edengillespie
The Spaniards who support Brexit
Why ‘The Sunday Times’ guide to ‘How to be Spanish’ missed the mark
Impressions of a Sanfermines first-timer
A true tale that’s stranger than fiction
Publicado por salud equitativa en 7:38